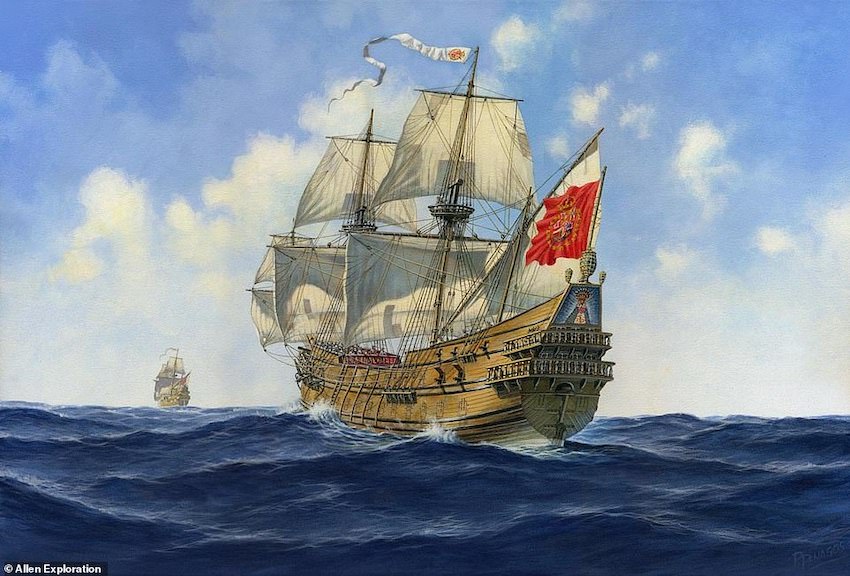 Between 2019 and 2020, an explorer in the Bahamas scanned a 17th century shipwreck using over 8,000 underwater metal detectors. As a result, he literally struck gold, big time. This week a new museum exhibition opens featuring the lost treasures of the ill-fated vessel dubbed “The Wonder.”

The Nuestra Señora de las Maravillas (Our Lady of Wonders) was an 891-ton, two-deck Spanish galleon armed with 36 bronze cannons. Serving as part of the 17th century Spanish Tierra Firme (Mainland) fleet, “The Wonder” departed from Havana, Cuba, on the 4th January 1656 AD heading for Spain. However, chaos unfolded when she collided with her own flagship only half an hour after leaving Cuba and the ship sank rapidly.

Many of the 650-strong crew held on to floating debris and survived the day, but once it was dark the shark frenzy began and only 46 souls made it through the night. From the depths of these shark-infested waters, the lost treasure of the ill-fated “Wonder” ship has been recovered and is now set to be exhibited to the public in a new museum in the Bahamas.

Tony Stark of the Bahamas and the Hunt for the Wonder Ship
When it comes to the Bahamas, whether one requires samples of ocean algae to study climatological fluctuations, samples of air above the sea, or hi-resolution photographs and imagery of sunken wrecks, Carl Allen, founder and CEO of Allen Exploration is “the man.”
This superyacht owner and commander of the Allen Exploration Fleet is tech-heavy. Thanks to a vast resource of technical equipment, he has the ability to dive to the depths of the sea with remote controlled robots, as well as to soar in the skies above the sea with tech loaded drones. 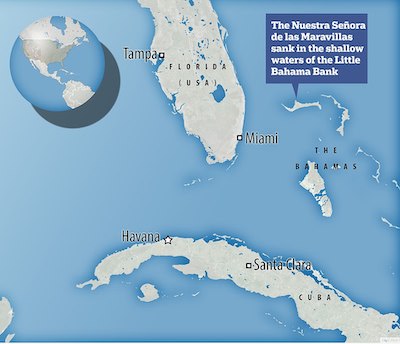 In 2019 the Bahamian government granted Allen Exploration permission to explore the wreck that covers an area of 13 kilometers (8 miles). Allen, who is            something of a Tony Stark in the Bahamas, launched a network of 8,800 underwater metal detectors, known as magnetometers, to scan the expansive wreck site.
On switching on this complex network, Allen was presented with thousands of disturbances in the Earth’s magnetic field. Each one represented a different part of the fated ship. Pig iron ballast, rigging and parts of the hull were all charted and visualized, but also tiny metal items such as iron hull fasteners, not to mention the hoard of treasure bound for the Spanish elite. Allen told the Daily Mail that he now intends to “share its wonders with everyone” in what is to be the first maritime museum to be established in the Bahamas.

Pummeled and Pulverized, But Not All was Lost
Spanish records state that “The Wonder” sank in January 1656 AD and that by July 1658 AD the wreck was almost entirely covered with sand. According to a report in The Guardian the “majority of its treasure – an estimated 3.5 million pieces of eight” was salvaged between 1656 AD and the early 1990s.
Allen explained that treasure hunter Robert Marx “heavily” salvaged the shipwreck in 1972, and it was again given a good “pummeling” in 1986 by Herbert Humphreys. Until now, historians generally agreed that the wreck had been all but lost, or “pulverized.” Allen’s recent treasure recovery operations, however, uncovered a hoard of hitherto untouched treasures from the Wonder ship. 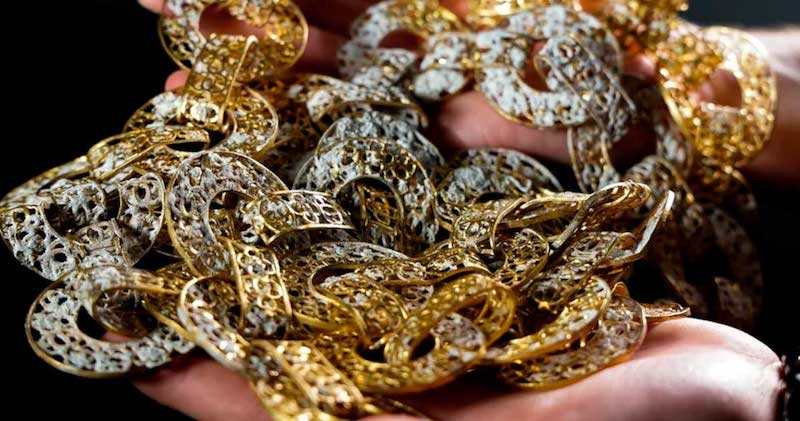 Three thick gold chains are encrusted with precious stones, heaps of gold coins and four golden pendants were all recovered from the shipwreck. One gold filigree chain was found to weigh a reported 887 grams (1.95 lbs) and comprises “80 alternating circular flat and tubular links, decorated with four-lobed rosette motifs.” It is suspected that this chain was crafted by Chinese craftsmen in the Philippines and then exported to Spain on the Manila galleon via Mexico.

A Treasure So Valuable - It Deserves It's Own Museum
The four golden pendants discovered on the Wonder ship were once worn by members of the ruthless organization of monastic warriors known as the sacred Order of Santiago, a group ingrained in 17th century Spanish shipping and maritime trade .
A spectacular aqua-green, oval, Muzo-Colombian emerald overlayed with an oval-shaped gold pendant featuring a Cross of St. James was discovered underwater. Because its outer edge is lined with 12 smaller square-cut emeralds it is believed this might represent the 12 apostles around the central emerald said to represent Jesus. A silver sword handle that once belonged to a Don Martin de Aranda y Gusmán was also found amidst day-to-day items like olive jars and Chinese porcelain.
n the Smithsonian Magazine Allen explained that some of the items were actually contraband, “illegally greasing the palms of Spanish merchants and officials.” And so valuable, both financially and historically, are these treasures that they will all be on display as of the 8th August 2022 in the purpose-built Bahamas Maritime Museum in Port Lucaya Marketplace, Freeport, on Grand Bahama Island off the Florida coast.