DAPHNE, a launch which went disastrously wrong on July 3rd 1883. 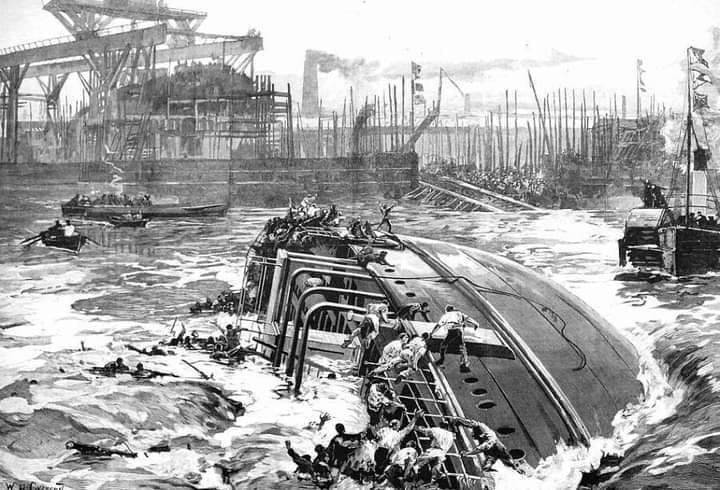 Built for the Glasgow and Londonderry Steam Packet Company she was put into the water at Stephen's.

On board were 200 men and boys who were to carry on fitting her out as soon as she was afloat. As was usual in the launching of ships two anchors and cables were employed to check the way on the vessel after she had entered the water. On this occasion the checking apparatus failed to function.

The starboard anchor moved some six or seven yards, but the port anchor dragged for about sixty yards and the current of the river catching the ship at a critical moment turned her over on her port side. The Daphne sank immediately in deep water, being completely submerged at high tide.

The disaster was witnessed by a large number of people, many of whom had relatives on board. The death roll amounted to 124 workmen and boys.

Rescue diver Thomas Fisher described swimming down through the Clyde to the Daphne, reporting that visibility was poor and the water was so thick that he had to work by touch. He said that the stairway leading to the cabin was ‘blocked with one solid mass of bodies,’ adding: “The men were lying there thick together, the one crowded on top of the other. “They had rushed from their tasks on board and had ‘jammed each other in a struggle to reach the deck.’”

An enquiry was held afterwards and cleared Stephen's of any blame leading to claims of a cover up.

A memorial exists in Govan to mark the loss of so many lives.

Despite this, Daphne was raised and had a career under various owners until sinking after striking a mine off Tenedos in Turkey in 1918.