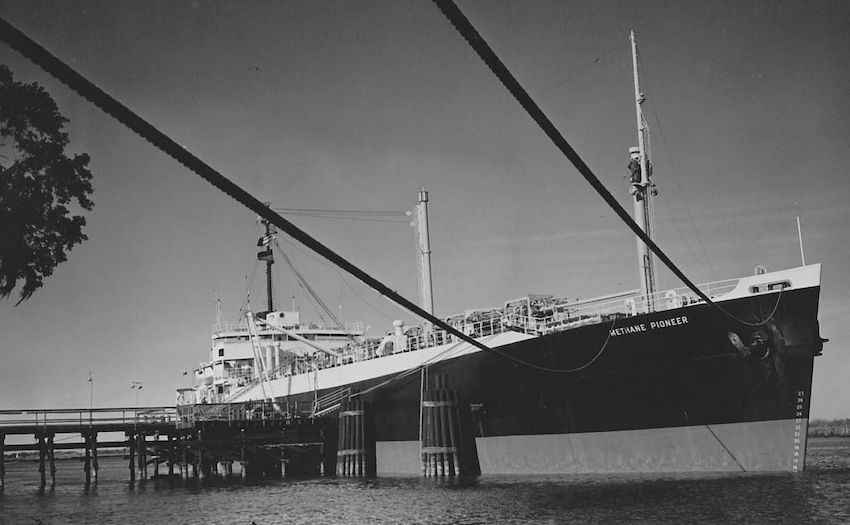 Meat packer from Chicago credited with initiating the liquefaction of gas

Today, shipment of liquefied natural gas (LNG) is a routine maritime event. There is a fleet of over 300 ships capable of carrying such cargoes, including many ships with the ability to carry 100,000 tons or more. Earlier this month, it was reported that the daily charter rate for a ship was $350,000. This is the highest rate ever paid for a cargo ship. However, it was only 62 years ago that the first shipment of LNG occurred. The ship named Methane Pioneer sailed from Lake Charles, Louisiana, to Canvey Island, England.

Due to the hazardous nature of the cargo, newspapers reported the event as “the first of its kind to ATTEMPT the hazardous task of carrying liquefied gas across the Atlantic.” Still today, we hear references to these ships being floating bombs.

On the first voyage, the ship carried 33,000 barrels, or 2,000 tons, of liquified methane. This is more than enough gas to supply the average needs of 1,000 American homes for one year. After the successful discharge, the president of the company said, “There are a lot of things that have to be checked and evaluated.” It was anticipated that a number of trips would be needed before the owners were confident enough to order larger ships.

The project, under the auspices of the Constock Liquid Methane Corp., an American company, and the British Gas Council, budgeted $11 million for the conversion of a ship, the construction of a liquefaction plant in Lake Charles and the building of special storage tanks on Canvey Island some 50 miles from London on the Thames River. The gas was distributed for general use in London.

The transport of gas in liquid form is a rather new industry, although LNG was first produced in 1912, and an LNG-carrying barge was patented in 1914, but was not built. The world’s first seagoing LNG ship was built in 1959. By liquefying methane gas to minus 258 degrees F, it occupies less than six-hundredths of its gaseous volume. However, at this temperature, steel becomes brittle and is subject to fracture.

The history of the transport of methane gas was proposed by Union Stock Yard Co. in 1954 for the purpose of refrigeration. The idea was to liquefy natural gas on the Gulf Coast where it is plentiful and then barge it to Chicago. Upon being allowed to expand, the resultant heat absorption would be used to deep freeze meat. Then, the gas would be used as a fuel.

Union Stock Yard had two special barges built at Pascagoula, Mississippi, for this purpose. The first barge was named Methane. This was a most appropriate name as natural gas is composed primarily of methane and small quantities of other hydrocarbon gases and nitrogen.

Realizing the potential of the operation, Union Stock Yard decided to join forces with Continental Oil Co. to form Constock Liquid Methane Corp. and later worked with the British Gas Council to build shore facilities and the ship.

The ship selected for the trial voyage was one of the 239 similar ships built during World War II and designated as a C1-M-AV1, or knot ship. The design evolved in 1943 when the U.S. realized that the war in the Pacific would require a small ship to facilitate the occupation of the many islands needed in the advance to the Japanese mainland. The ship was built in Duluth, Minnesota, in 1945 and named Marline Hitch. In 1946, the Maritime Administration sold the ship, and it traded until 1958 in the dry cargo trades between the East Coast and the Caribbean.

The conversion from dry cargo to gas tanker was performed in Mobile, Alabama, by the Alabama Drydock and Ship Building Co. The work included deepening the hull by 12 feet and installing five special aluminum tanks insulated by balsa wood with an outer jacket of steel with associated piping, pumps and valves.

The ship was renamed Methane Pioneer and put under the British flag. After three months of sea trials, the 339-foot-long ship of 5,058 gross tons sailed with a cargo of 2,000 tons of liquefied natural gas at a temperature of minus 258 degrees F on Jan. 31, 1959. After seven successful trips, the results were analyzed, and the $11 million gamble proved to be a success. Based on the results, two new, larger ships were contracted to be built. As for the Methane Pioneer, it was sold in 1967 and became a storage vessel renamed Aristotle at Recife, Brazil.

Thus, as many people predict that natural gas is a transitional fuel, the immediate future is very positive. It is interesting to think that it was a meat packer from Chicago that initiated the concept of liquefying gas so that it could be transported by sea.