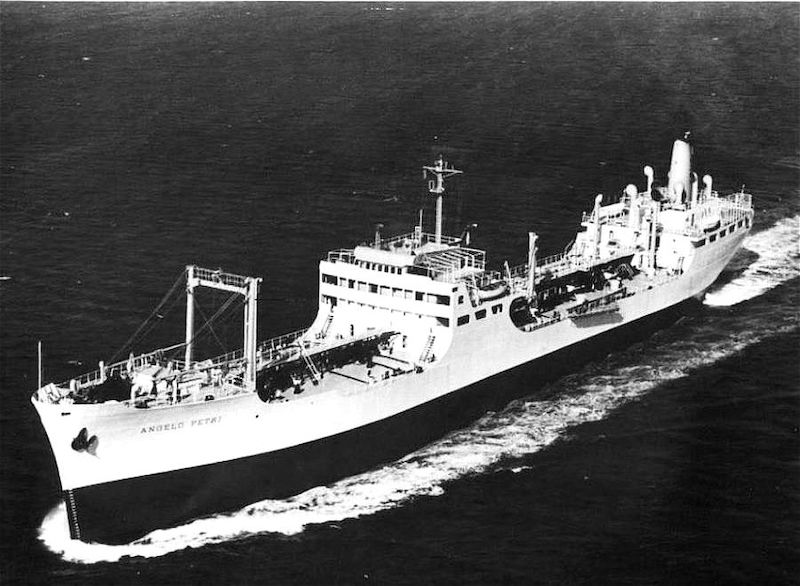 When world’s largest wine ship nearly sunk outside the Golden Gate, the S.S. Angelo Petri, the world's largest wine tanker was in distress off the coast of San Francisco in 1960.

Let it never be said that San Franciscans will sit idly by when 1.7 million gallons of wine are at risk.

The story of the S.S. Angelo Petri jumps off the page 62 years after the massive tanker ship was blindsided by a giant wave just outside the Golden Gate. The front-page headline “Huge ship fights seas off beach” from Feb. 10, 1960, grabbed my attention, and a trip to The Chronicle’s archive turned up packs of negatives labeled “Ship in distress off S.F. coast, air views” and “Half ship launching at Bethlehem yards.”

This was a story that needed retelling.

The S.S. Angelo Petri became the world’s largest wine tanker in the middle of the 20th century. It could carry up to 2.5 million gallons of Cabernet, Chardonnay and the like, usually shipping between the Bay Area and the East Coast via the Panama Canal.

Before its wine-carrying days, the tanker had a split history. One half was from the S.S. Sacketts Harbor, a ship that broke in two during a March 1946 storm off Alaska’s coast. It was towed to safety and eventually bought by the city of Anchorage, which used it as a power station for 10 years. The Petri’s other half was built for $7 million and launched from Bethlehem Shipyards in San Francisco on June 4, 1957. Three months later, the two halves were welded together and the S.S. Angelo Petri was born.

It was named for the chairman of United Vintners of Stockton and was outfitted with cutting-edge stainless-steel tanks, pumping and piping so it could carry wine to people unlucky enough to live outside Northern California.

For two and a half years the S.S. Angelo Petri did its duty without incident, but on Feb. 9, 1960, the seas struck close to home. A surprise wave swamped and crippled the wine tanker outside the Golden Gate while it was carrying 1.7 million gallons of wine, 3,500 tons of vegetable oil and 1,000 tons of rocket fuel bound for the Air Force.

Seaman John Jabin was lying in his bunk when the wave struck. “We were hit so hard by the sea that everyone thought we’d run into another ship,” he said.
Third engineer Maurice Widner was in the engine room, far below deck. “The sea came down the stack and ventilators,” he told a Chronicle reporter. “Water doused the main switchboard and that was that. It shorted out everything.”

The incapacitated ship drifted nearly six miles before the anchors caught on a sandbar west of Fleishhacker Pool near the San Francisco Zoo.

About half the crew were evacuated to the city, but eventually the ocean calmed and five tug boats pushed, pulled and prodded the hulking tanker into the harbour. It would be repaired in a few weeks. More importantly, the wine was tested and deemed fit to drink.

Source  Nigel Owen - All at Sea