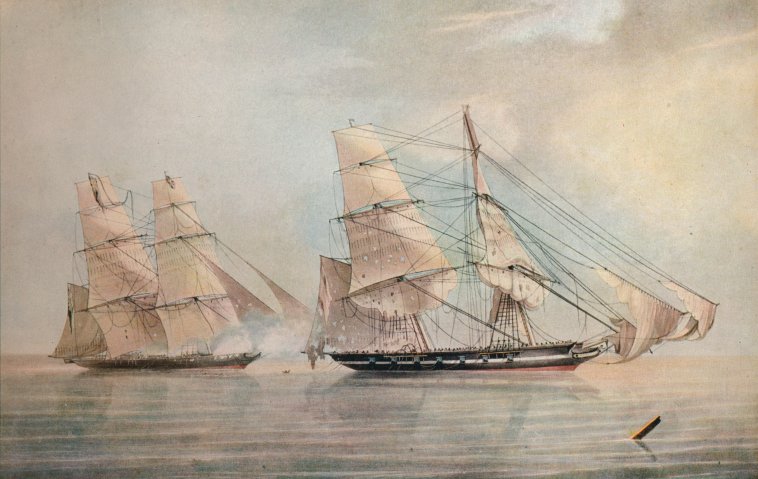 By the time Henry Downes took command of the Black Joke, the ship had only been on the waters under that name for just a year. A former slave ship itself, the Black Joke was captured in 1827 by the British Royal Navy’s West Africa Squadron, its incredible speed repurposed for chasing down and capturing slave traders as they attempted to make their way to the Americas

For five months, Downes, had been on watch for just one ship—the notorious slaver El Almirante, reputed to be back off the coast of Western Africa and known to have already illegally transported thousands of the enslaved to the Americas in its sordid career. In mid-January 1829, the Black Joke, while patrolling near Lagos, came across what appeared to be several Brazilian slavers embarking Africans. Standing oﬀ the coast so as not to spook them, rumor reached Downes that one ship was a fancy, familiar Spanish brig nearly ready to set sail—after the waiting and unproductive cruising, El Almirante had, all unexpected, made its appearance.

On the water, rumors traveled both ways; just as Downes had heard that this was the brig he sought, El Almirante had, in turn, been warned of the appearance of Black Joke. Damaso Forgannes, the recently promoted captain of El Almirante, could not have been less concerned about the prospect of capture. Reputed to have laughed upon hearing the news, Forgannes scoffed publicly at the ludicrous notion of the Black Joke capturing his vessel, continuing to openly purchase enslaved people. The reaction wasn’t entirely unreasonable—El Almirante was an inordinately expensive ship, even for a slaver, purpose-built and equipped with every advance in design its (undoubtedly American) shipwrights could conceive. If making a break for open water was not an option, the slaver crewed upward of 80 men and carried 14 powerful guns.

There was no question that the two-gunned Black Joke, with a crew of 47 plus a temporary supplement of eight men from another Squadron ship, was hugely outpowered in just about every measure. Downes, as undeterred as his opposite number on the slaver, set the Black Joke just out of sight of the harbor, periodically sending boats to check on the progress of the Spanish brig and make sure it continued to load human cargo, since the presence of the enslaved would be the vital evidence against El Almirante that might ultimately condemn it.

Continuing to gather information soon proved worthwhile, especially when a crew member reported back to the Black Joke with the slaver’s destination. Having thus discovered El Almirante’s next port, Downes spent every idle hour calculating the best way to get to the Antilles, moving to a position that hopefully anticipated the correct course. Black Joke was as prepared as it could be. Now, truly, all they could do was wait. Then, on Jan. 31, a fancy Spanish brig appeared with first light. Primed as the crew aboard the Black Joke must have been, they immediately crowded on all sail and, catching a scant breeze, gave chase . . . but the delays weren’t over. In the vital moment, after five months of searching and two weeks of waiting, the wind died. Becalmed, yet undeterred, the crew set to rowing. Nine hours and 30 grueling miles later, they caught the slaver at sunset, who met the Black Joke’s arrival by immediately ﬁring on it.

Everything about catching the Spanish brig had been difficult, and Forgannes had no intention of bucking that trend. Throughout the night, El Almirante repeatedly attempted to close on its would-be captor, ﬁring broadside after broadside. The tender’s bulwarks were not equipped to protect its crew from the slave trader’s heavy armament, so still mostly becalmed, Downes ordered the exhausted crew back to oars. For the rest of the night, far from taking the break they’d richly earned, the Black Joke evaded the slaver by means of paddling rather than tacking sails, always just out of reach of El Almirante’s guns. The move was clever, effective and utterly exhausting. By dawn on Feb. 1, both ships were much as they had been the evening before, still becalmed less than a mile and a half from each other, and with the arrival of the sun, the fighting temporarily ceased. Clearly everyone was prepared for the coming battle, but for the duration of the hot, still morning, both crews could do little else but rest.

Just past noon, the breeze returned. Rather than run, Forgannes moved toward the Black Joke, still certain of victory. Downes, altering his position, wasn’t intimidated. As soon as the Black Joke was within range of grapeshot to the aft of the slaver, Forgannes tried for another broadside. Mortal peril notwithstanding, the crew of the Black Joke had been waiting for this moment for months, and they responded with three cheers and two double-shotted cannons aimed directly at the slave trader’s deck. For 45 minutes the Black Joke held, but when it came to guns, nothing had changed—El Almirante had too many of them. Rather than continue when they were so clearly outmatched, and with the slaver again closing in, Downes switched tactics entirely and gave the order to bring the Black Joke alongside and prepare to board. But suddenly, in what must have been an annoyingly familiar turn of events, the wind died. Again.

This shift in conditions allowed Forgannes to get oﬀ a shot that could well have been deadly for everyone aboard the Black Joke had it been better aimed. A light wind 15 minutes later allowed El Almirante, buoyed by the near miss and even more conﬁdent in success, to once again take the offensive and move in for another attack. The breeze wasn’t much, but it was enough to give the more maneuverable ship the advantage, and Downes knew exactly which ship that was. In that moment, Downes asked every bit of skill from his crew and everything of Black Joke—and both delivered.

The Black Joke successfully attained El Almirante’s leeward quarter, and from there it gave the slaver all it could handle and then some. For 20 minutes, without pause or respite, the tender raked the quarter and stern of the slaver, and the Black Joke did not miss—seeing the damage subsequently, the Squadron’s Commodore declared that he had “never in his life witnessed a more beautiful specimen of good gunnery.” The repeated attack to just one section of the slave trader created a serious risk of structural damage that, if continued, might well have rendered the ship permanently unseaworthy. Realizing this, El Almirante at last struck its colors and surrendered.

When the Black Joke’s crew finally boarded, they discovered that, regrettably, 11 enslaved people had been killed in the prolonged action. Among the slaver’s crew, 15 were killed, including Forgannes, and every officer but the third mate and 13 wounded. Black Joke had fared better, but had six wounded, two of whom would eventually succumb to their injuries. Both ships’ rigging had taken extensive damage, though El Almirante had the worst of it. The Black Joke had at least one Black, non-Kru seaman, a free African named Joseph Francis, who’d been determined to “strike a personal blow” against the infamous slaver. During the battle, he’d got 12 feet of chain into one of the ship’s guns as it was being loaded; when it was ﬁred, “the starboard main shrouds of the slaver were cut oﬀ [. . .] as if by the single blow of an axe.”

Even with the damage, El Almirante was still a valuable prize, but there was more. One of the Black Joke’s officers, upon searching the slaver, discovered a large cache of gold doubloons; the capture ultimately cost the slaver’s owners roughly “35,000 dollars.” Of arguably more importance—at least to the Squadron—was the additional discovery of cryptic letters in cipher. Less than a week later, Sybille, the Squadron’s flagship, would capture the slaver Uniao, which, during the chase, had been seen tossing papers. When Sybille recovered the letters, they, in conjunction with those found on El Almirante, divulged the nature and location of secret slave trade routes to Havana, then one of the world’s busiest slaving ports. They also warned other slavers that the West Africa Squadron had become an effective force, and only fast, well-armed ships could have a chance of escape. Rumors would continue to spread—the Black Joke was more than just another WAS ship to avoid. It was the ship to avoid.

The Black Joke would sail for three more years before being burned in 1832. Once a home to heinous suffering, and despite a tenure complicated by dubious diplomacy, pirates, revolt, pandemic, mysterious disappearances, and disasters both natural and man-made, the Black Joke had become the scourge of enslavers and the symbol of a squadron, proof that the suppression of the slave trade wasn’t an impossible mission.

This is not, however, yet another narrative in which Britain mostly saves the day. The history of the Black Joke (and certainly that of the Royal Navy) resists such simplistic assessment. Far from a story of unmitigated White Saviorism, this complex history has few uncomplicated heroes, even when writ as small as a single ship in a much-larger landscape. The slave trade, it’s laggardly, stutter-step demise—the choices made then have filtered into every facet of our modern world, and the Black Joke’s cruise is still in the food we eat and clothes we wear, in our borders and economies, in how historical legacies of racialized violence, colonialism and exploitation are perceived and remembered. The repercussions of the transatlantic slave trade surround us, still, and regardless of which side of the Atlantic we live on, we can feel the reverberations of centuries of industrialized human trafficking and the turbulent decades encompassing the fight to stop it. Escaping the slave trade was difficult; escaping its legacy has proved impossible.