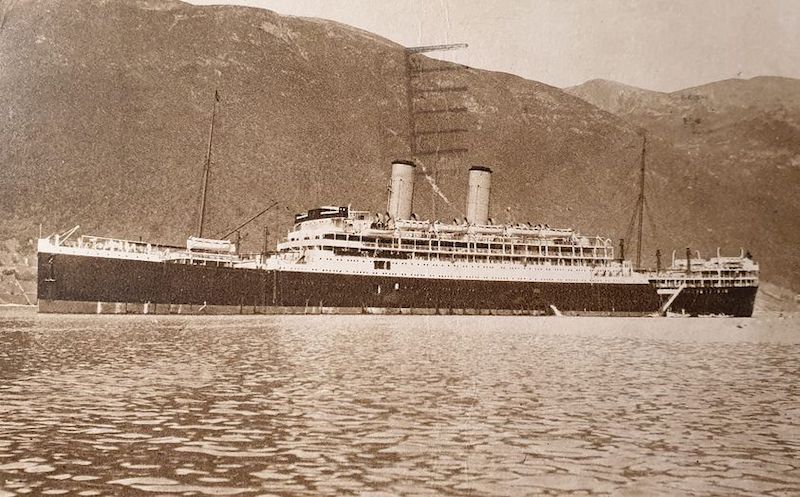 Troopship Oronsay, 20,043grt, (Orient Line) having discharged troops in the Middle East the Oronsay had been sailing independently back to the UK via Cape Town and Freetown. Loaded with a cargo of oranges, copper slabs, fifty RAF personnel and twenty DBS returning home from previous sinking’s, sailing from Cape Town on the 30th September 1942.

On the 9th October about 500 nautical miles West, South-West of Freetown the ship was intercepted by the Italian submarine Archimede and hit by one torpedo on her starboard side and immediately took on a list. A short time later a second struck the port side, swamping a number of lifeboats being launched. As the last of the boats pulled away from the ship she was hit by two more torpedoes detonating the ships magazine and with the bow rising slowly in the air the ship slipped beneath the waves and sank in position 04’ 29N 20’ 52W along with six crewmembers. Eleven lifeboats and two motor launches had successfully been launched and the convoy of little boats set a course for Freetown in tow by the two motor launches.

The following day the two strings of lifeboats became separated and each group were left to fend for themselves and after two days one of the launches broke down and it was decided each boat should try and make land on their own. The majority of survivors were found a short time later by a British Destroyer and landed at Freetown.

A number of other lifeboats were found after five days adrift by a French naval sloop and French Merchant ship and the sixty-three survivors landed at Dakar where they were interned by the Vichy French authorities.

The last two remaining lifeboats continued on their voyage of uncertainty and after six days apart came in sight of each other once again and rowed towards each other where the men were equally distributed between the two boats only to become separated again during the night. Over the next few days the survivors collected rainwater when possible to supplement their meager supplies and both boats continued to drift. Enduring the freezing nights only to be replaced by the searing heat of the day the men continuously doused themselves in sea water to keep cool. One survivor needed to be restrained after starting to go insane and still they drifted, setting sail whenever there was enough wind. On the eighth day an aircraft was sighted, but flew by without noticing them. Although disappointing the men took some comfort as to the fact they were getting closer to land and the constant rain squalls kept their water rations to a bearable level of existence. On the tenth day another aircraft was sighted and a smoke float was thrown overboard, which failed to go off. Scrambling for the last remaining smoke float, this one was set off and a large plume of orange smoke drifted skywards, but the aircraft continued on its original course. As their hearts began to sink the aircraft suddenly altered course and came roaring in at sea level, identified as a Wellington bomber. Circling the boat several times an Aldis lamp flashed a signal to the survivors stating their position had been transmitted and help was on its way. Keeping contact with the boat the Wellington continued to circle the lifeboat until a Hudson aircraft appeared dropping medicine and food supplies before both planes flew off into the distance and the men settled down for the night in high spirits. The boat now with her sea anchor strung out to hold her position bobbed around relentlessly.

As the hours dragged by during the night the survivors scanned the dark horizon for any sign of their would be rescuers. As the morning light began to break through a flashing light was seen in the distance and the silhouette of a British Destroyer. Shortly after being picked up the second lifeboat was sighted and all the survivors landed at Freetown that evening.

Source: Billy McGee from his book “The Sea is Their Grave”