What a Watch Tells Us About the Titanic’s Final Hours 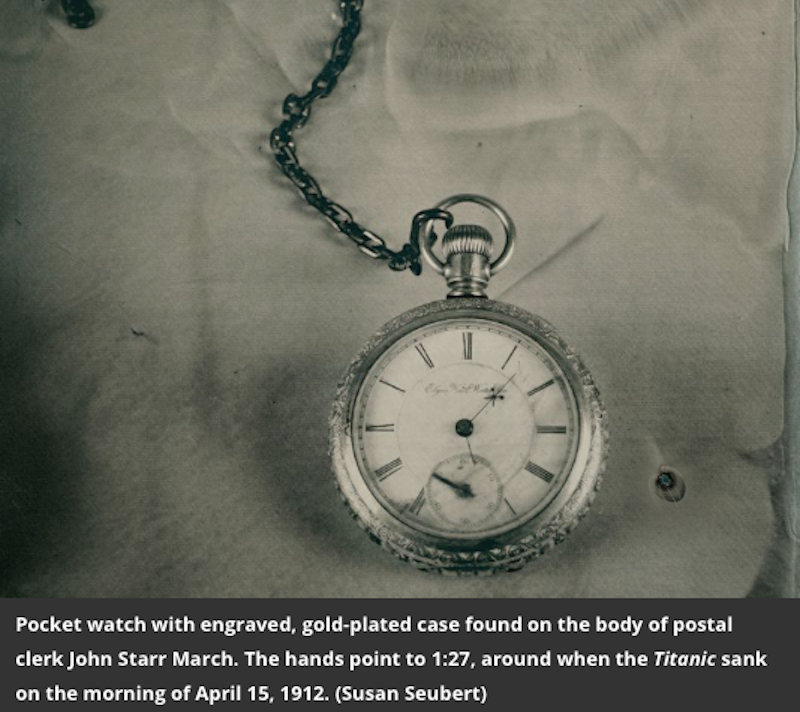 The first thing you notice is that the watch is handsome: the gold case engraved with an elegant filigree, the fine script announcing it was made by the Elgin National Watch Company. It’s a watch befitting its respected owner, John Starr March of New Jersey, who in 1912, at the age of 48, served as a mail clerk aboard the Titanic.

March’s wife had died in 1911, and his two daughters implored their father to look for a job on dry land; it’s easy to imagine that having lost one parent already, they wanted to hold onto the other. March was no stranger to drama on the high seas: In eight years working in ocean liner mailrooms, he’d been involved in no fewer than eight separate nautical emergencies. But the Titanic assignment was apparently too good to pass up: a chance to run themailroom aboard the greatest ship ever built.

Next you notice the rust-colored stains on the watch’s white face, signs of water having seeped beneath the glass, and the black hands, slender, the larger with a delicate metal decorative accent, showing the time as 1:27. And what a tale those hands tell if you also recall that the fateful collision on April 14, the Titanic striking an iceberg in the North Atlantic on its maiden voyage, occurred at 11:40 p.m. The 883-foot-long ship plunged beneath the surface less than three hours later, at 2:20 a.m. Some 1,500 passengers and crew died and 705 survived.

So, 1:27. Inevitably we wonder what March was doing in the hour and 47 minutes after the Titanic struck and before his watch stopped.

The cost of building and operating such a ship, says Daniel Piazza, a curator at the Smithsonian National Postal Museum, was too great to cover with passenger fares alone. So the giants of the White Star and Cunard lines carried mail, maybe a million individual pieces on any given voyage. Aboard Titanic, there were five postal clerks and a fully operating mail-sorting facility—a rarity, since ocean liners more typically carried closed mailbags from one port to another. Among other things, the Titanic’s sorting facility allowed passengers to send postcards and letters when it docked in Ireland and France.

Mail clerk might sound like a menial occupation, but it was in fact a plum assignment. “You had to pass a test and only the top percentage would qualify for this sort of a job,” says Piazza. And they were paid accordingly, he adds, with salaries “somewhere between $1,000 to $1,500 a year, which is a lot of money in 1912.”

In the hierarchy of the ship’s crew, the mail clerks were somewhere in the middle. Initially, they were housed in third-class quarters, and expected to take their meals with that group, but after some protest they were moved, and given a private dining room. On the evening of April 14, they had gathered to celebrate the 44th birthday of another American mail clerk aboard, North Carolina-born Oscar Scott Woody.

A ship’s officer who rushed to the mailroom after it had become clear the vessel was in serious trouble later told a Senate hearing investigating the disaster what he saw. “I looked through an open door and saw these men working at the racks, and directly beneath me was the mail hold and the water seemed to be then within two feet of the deck we were standing on....And bags of mail floating about.”

Like the chamber orchestra, which reportedly continued to play until just before the ship sank, March and his colleagues apparently performed their duties amid the chaos and tried to save as much mail as they could. Piazza suggests they would have started with the registered mail; and indeed, survivors later reported seeing the clerks hauling mailbags up to the deck, evidently in an attempt to keep them dry until help arrived. Help did not materialize until after the ship went under, of course, and in some accounts people huddling in lifeboats later reported seeing mailbags bobbing in the inky-black water.

In 1985, oceanographers located the wreck some 13,000 feet below the surface, and over the years salvage operations would recover countless Titanic artifacts—dishes, jewels, pieces of the ship itself, many items eagerly purchased by collectors on the private market—as well as 340 bodies, including that of John Starr March. He was buried in Hillside, New Jersey, with “U.S. Sea Post Service, R.M.S. Titanic” engraved on his headstone.