Why King Khufu’s Solar Boat Is on the Move After 4,600 Years 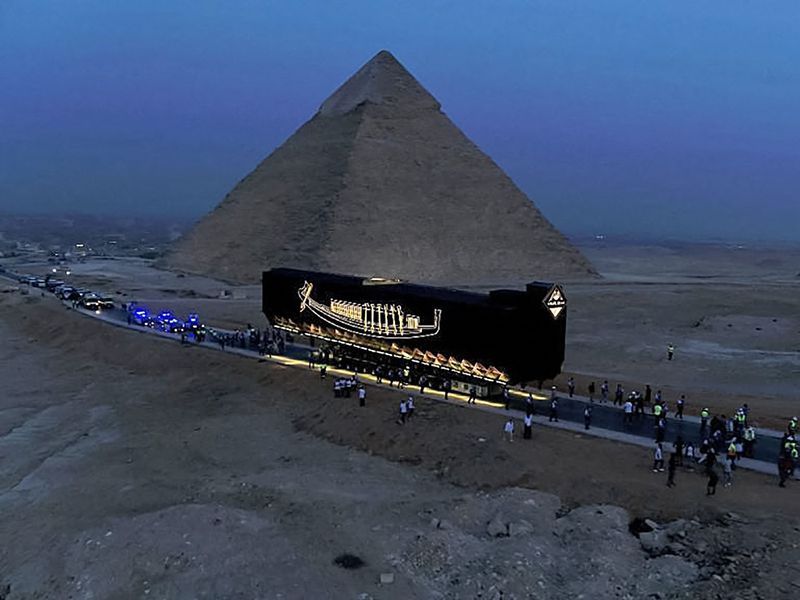 Last weekend, a 4,600-year-old ship once owned by the pharaoh Khufu traveled from its longtime home near the Pyramids of Giza to the Grand Egyptian Museum, a state-of-the-art venue slated to open outside of Cairo in late 2021.

As Agence France-Presse (AFP) reports, the 20-ton, 138-foot-long vessel—a solar barque, or solar boat—was found buried next to Khufu’s Great Pyramid in 1954. Experts are unsure of the ship’s exact purpose, writes Kamal Tabikha for the National, but suggest it may have been part of the pharaoh’s fleet in life, or was perhaps designed to carry the resurrected king through the skies following his death.

Egyptian officials transported the cedarwood boat in a shock-absorbing metal container carried by a remote-controlled vehicle imported from Belgium. Though the Pyramids of Giza stand just five miles away from the new museum, the procession had to move slowly to protect the fragile vessel from damage. In total, the trip took ten hours, beginning late Friday night and wrapping up Saturday morning.

“The aim of the transportation project [was] to protect and preserve the biggest and oldest organic artifact made of wood in the history of humanity for … future generations,” says Egypt’s Ministry of Tourism and Antiquities in a statement, per a translation by Reuters.

According to the statement, the imported vehicle—initially unveiled in June—is outfitted with technology that absorbs vibrations and adapts to changes in the terrain. Archaeologists and engineers collaborated on the project to ensure that the ship emerged from the journey fully intact.

Khufu ruled over Egypt sometime during the Fourth Dynasty (roughly 2613 to 2494 B.C.E.). Scholars don’t know much about the pharaoh, but he probably ascended to the throne in his 20s and began work on his Great Pyramid shortly after assuming power, per the BBC.

Writing some 2,000 years after Khufu’s reign, the Greek historian Herodotus described him as a cruel, wicked leader who relied on enslaved people to build his pyramid. Other accounts portray the king as a traditional, good-natured monarch who only employed conscripted laborers.

Kamal el-Mallakh, one of Egypt’s most renowned archaeologists, discovered Khufu’s ship in 1954 in a closed pit near the Great Pyramid, the oldest and largest pyramid on the Giza plateau. The vessel had fallen apart by the time el-Mallakh found it, but the wood remained well preserved because it had been tightly sealed in a 171-foot chamber, notes the National.

Per PBS’ “Building Pharaoh’s Ship” portal, the archaeologist spent some 20 months excavating the boat’s 1,224 fragments. Restorers only pieced the vessel back together after roughly a decade of researching ancient Egyptian shipbuilding techniques, wrote Tim Wyatt for the Independent in 2019. 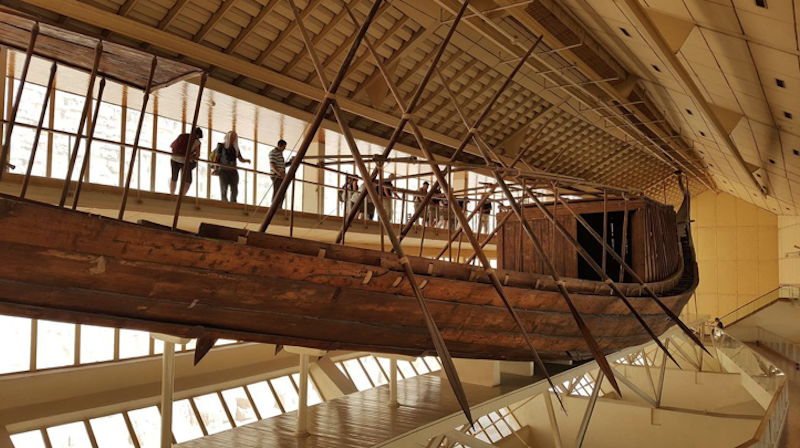 Officials plan to host an unveiling ceremony for the boat at a later date. The ship will ultimately be displayed at the much-anticipated, long-delayed Grand Egyptian Museum, which will feature more than 100,000 artifacts outlining the nation’s ancient history. Objects on view will include a group of around 30 sealed coffins unearthed in Luxor in 2019 and more than 5,000 items from the excavation of King Tut’s tomb.