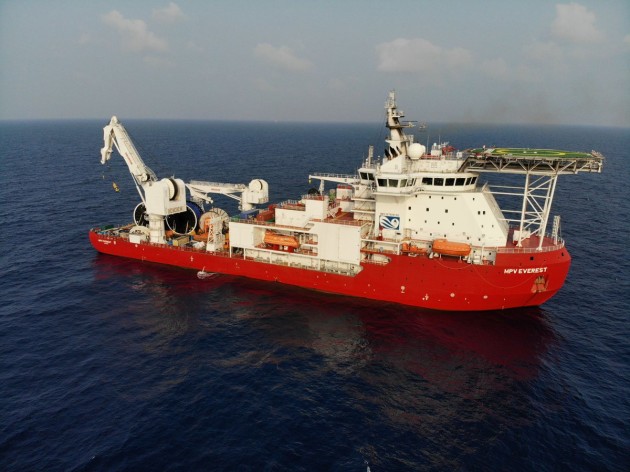 The Australian Antarctic Division will use the MPV Everest to resupply its Antarctic stations and sub-Antarctic Macquarie Island next summer.

The Ice-Class Multi-purpose vessel is operated by Dutch company Maritime Construction Services and is capable of navigating in ice up to 1 metre thick.

AAD General Manager of Operations and Safety, Charlton Clark, said the end of the Aurora Australis’ contract and the delayed arrival of Australia’s new icebreaker RSV Nuyina means an alternative ship had to be contracted.

“The MPV Everest was selected after a call for proposals and was identified as providing the best value for money,” Mr Clark said. “The 140 metre long ship was built in 2017 and will be used for a minimum of 90 days next Antarctic summer season.” “The vessel can accommodate up to 100 expeditioners, has large fuel storage tanks and space for up to 96 twenty-foot cargo containers on its decks. “It also has a helipad above the bridge which will be used for ship-to-shore resupply operations,” he said.

Australia’s new icebreaker RSV Nuyina was due to arrive in Hobart at the end of the year, but the current COVID-19 pandemic will delay its arrival.

“The fit-out and testing schedule for the vessel is being severely impacted by travel restrictions around the world, with specialist teams unable to get to the shipyard in Romania,” Mr Clark said. “Due to the uncertainty around the coronavirus situation, we don’t know when the ship will be finished and ready to undergo the required sea-trials before being handed over to the Australian Antarctic Division.”

It’s not expected that the delay will have any impact on the cost of the long-term contract.