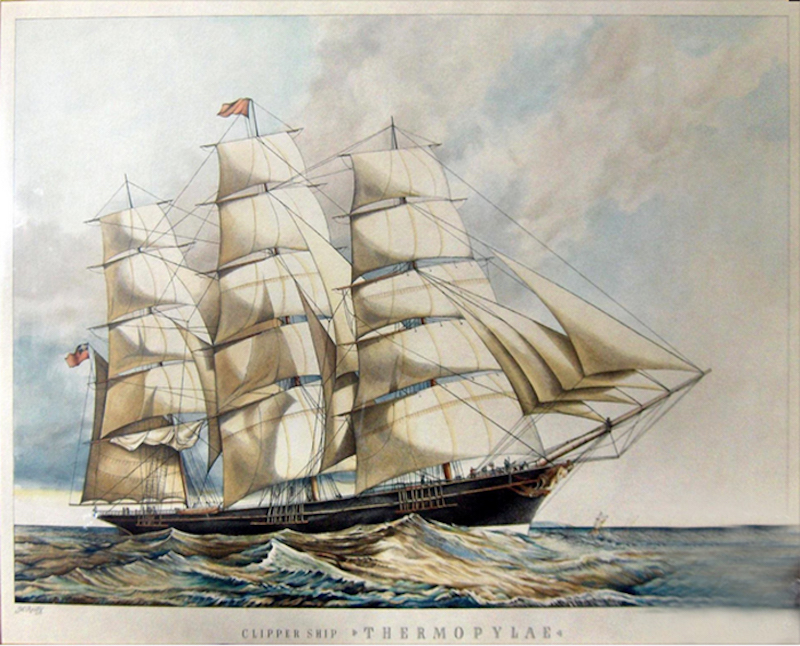 The British clipper ship Thermopylae arrived in Melbourne on 9 January 1868, having sailed from London in the record time of 63 days.

She left left Gravesend, Kent, on November 7 1868, on her maiden voyage for Melbourne, under the command of Captain R. Kemball. Not a regular master in the Aberdeen Line, Kemball had been chosen for the reputation he had made while in command of the Yangtse, normally a slow ship, but one in which he had beaten crack vessels.

The Thermopylae passed the Lizard 33 hours from Gravesend; 21 days out saw her crossing the Equator - that day she sailed 288 miles.

Finally, she anchored at Melbourne 63 days from the Lizard, a record; and, having discharged her outward cargo, went on to Newcastle, New South Wales, to load a cargo of coal for Shanghai. This passage she did in 28 days, pilot to pilot, which was another record.

Having loaded tea, she left the Pagoda Anchorage in early July and made a passage of 91 days home against the monsoon. This was a third record, but twelve days later Sir Lancelot, under Captain Robinson, arrived in the Thames, having done the passage in 89 days, which is still the record for a sailing ship from China against the monsoon.