The Other Titanic ? SS Waratah, the Lost Ship Of South Africa 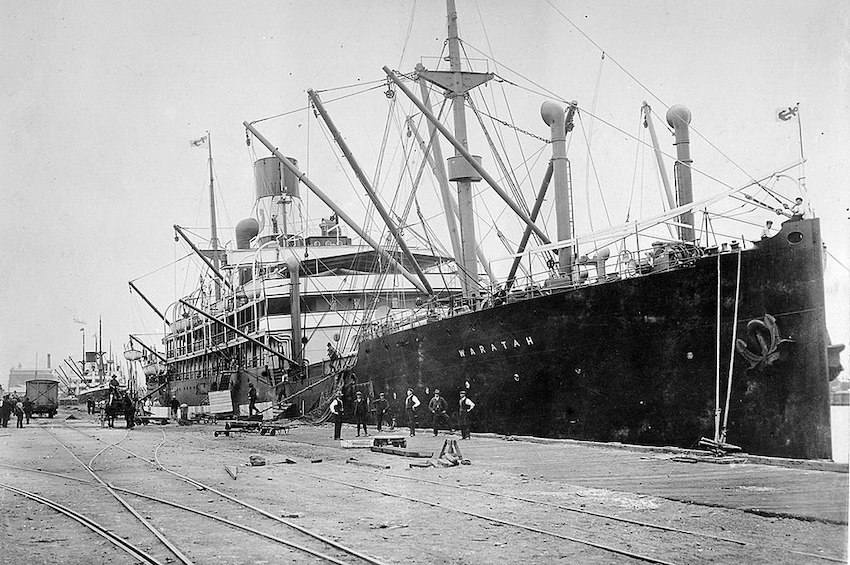 The story of the Titanic, which sank after colliding with an iceberg with the loss of 1,500 lives, is well known. Such maritime tragedies were thankfully rare by the 20th century, but the loss of the Titanic was the second time a large passenger steamship had been lost in three years.

The SS Waratah
These are the known facts: in July 1909, the passenger and cargo steamship Waratah disappeared suddenly on her return voyage from Australia to Cape Town in South Africa. More than 200 passengers went missing in the Indian Ocean off the eastern coast of South Africa.

Waratah was brand new, having been constructed the previous year in 1908. She had been designed for Blue Anchor Line’s shipping company and was meant to operate between Europe and Australia. The ship was launched on the 12th of September 1908 by the wife of the Agent-General of Victoria, Mrs. J. W. Taverner.

The ship disappeared on only her second voyage. She left Durban in South Africa at about 8.15 pm on the 26th of July, 1909, with the crew and 211 passengers on board. On the 27th of July, at around 4 am, the ship was spotted by another ship named Clan Maclntyre, the steamer of Clan Line shipping company.

As SS Waratah was a faster ship, she was able to catch up and drew level with Clan Maclntyre by 6 am. Both the vessels communicated with each other using signal lamps and exchanged information relating to the name and destinations of the ships.

Eventually Waratah pulled away from Clan Maclntyre, gradually speeded up and vanished over the horizon by 9.30 am. This was the final sighting of the ship, who was unknowingly sailing into a hurricane.

Over the next 24 hours the weather deteriorated rapidly and the seas became extremely rough. According to the captain of Clan Maclntyre, it was the worst ever weather condition he had witnessed at sea in his career as a seaman in 13 years.

Unconfirmed Sightings
There have been a number of unconfirmed sightings of SS Waratah after its disappearance. On the 27th of July, a ship named Harlow saw smoke coming out of a steamer. The amount of visible smoke made the captain of Harlow think that the ship was on fire, and certainly a new ship such as the Waratah should not be producing excess smoke unless something was seriously wrong.

When darkness fell, the Harlow crew saw the running lights of the steamer approaching. Then, as they watched, they suddenly saw two bright flashes coming from the direction of the steamer, and the lights disappeared. The captain thought it was due to explosions.

On the same evening, at about 9.30 pm, the Union-Castle Liner “Guelph”, which was heading north of Durban, passed a ship and exchanged lamp signals. Due to poor visibility and bad weather, she was only able to see the last three letters of the ship ‘T-A-H.’

The final possible sighting comes from the land. A mounted rifleman named Edward Joe Conquer was watching the seas through a telescope on 27th July. In his diary, he had mentioned a ship whose description matched that of Waratah. He had witnessed the ship struggle with the heavy seas and then suddenly disappear as the wave rolled over her.

Search Efforts
SS Waratah was scheduled to reach Cape Town on the 29th of July, 1909. However, she never reached her destination. Initially, the non-appearance of Waratah was not so alarming as it was quite common for the ships to reach the ports days or weeks overdue.

As SS Waratah was thought to be unsinkable (much like the later Titanic), a delayed arrival was expected due to some mechanical faults or a potential breakdown. However, fear started growing as other ships that left Durban after SS Waratah started arriving, and they reported not seeing Waratah.

On the 1st of August, 1909, the first search was launched by the tugboat T.E Fuller. Encountering dreadful weather, she was forced to abandon her efforts and return to port. Cruisers named HMS Forte, and HMS Pandora were deployed by the Royal Navy to search for Waratah. However, due to large and strong waves, they also had to return to the port.

By this time it was becoming apparent that the worst had happened. On the 13th of August, 1909, the steamship named Insizwa reported sighting several bodies at the Mbhase River’s mouth, where Waratah was last seen. The captain of another ship, the Tottenham, also saw bodies in the water two weeks after the disappearance of Waratah.

In September 1909, the Blue Anchor Line again tried to find the Waratah, sending the Union-Castle cargo ship Sabine to search. The Sabine was equipped with searchlights and other equipment, but she also failed to find any trace. The Waratah had simply disappeared.

What Happened to Her
There are a number of theories relating to the disappearance of SS Waratah. One of the prominent theories is that the SS Waratah may have encountered what is known as a “rogue wave” off the South African coast.

These waves are even now poorly understood, but it seems that on rare occasions storms and high winds can produce a single wave in a sequence which is much larger and higher than the others. The Waratah would likely have been swamped if she had been hit by such a giant wave.

Even if the wave did not sink her, the ship may have been incapacitated due to damage from the wave and became lost in the sea after losing her rudder. However, except for the absence of a wreck, there is no actual evidence that supports this theory.

Another theory is cargo shift. Waratah was carrying about 1,000 tons (907 tonnes) of lead and 300 tons (272 tonnes) of iron ore in the form of a coarse, broken up powder. These concentrates could have liquified due to the motion of the ship and shifted, affecting the ship’s stability and causing it to capsize.

Many other people suggest that SS Waratah may have been caught up by a whirlpool and disappeared. The explosion is yet another potential theory relating to the disappearance of Waratah, as reported by the officers of Harlow.

Until the wreck is found however, we can only guess as to the fate of the Waratah.

14 JULY 1999 - DISCOVERY OF THE WRECK OF PASSENGER LINER SS WARATAH
The SS Waratah was the flagship of the Blue Anchor Line shipping company. On the 14 July, marine explorer, Emlyn Brown, announced he had discovered the location of the wreck off the Eastern Cape coast. This was the culmination of an 18 year long search for him. The wreck was found in an upright position, resting on the ocean bed, indicating that it had sunk quite rapidly. Brown declined to share the exact location of the wreck, as this would tempt unscrupulous and amateur explorers to plunder the wreck. Further, the wreck was located at a position surrounded by strong currents and at a depth that made conventional diving techniques and equipment unsuitable. It is speculated that the ship was sunk by a freak wave.