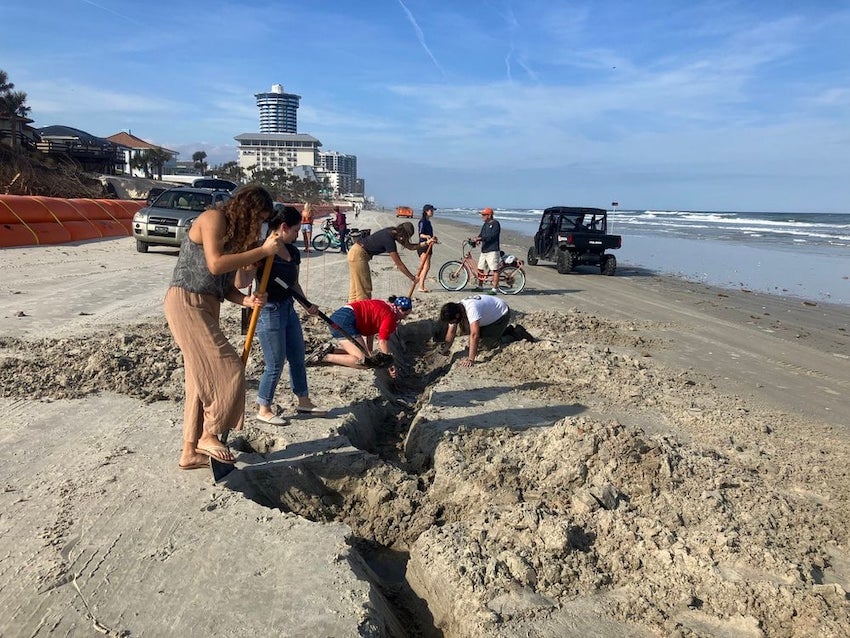 Beach erosion caused by Hurricane Ian and Hurricane Nicole has revealed the remains of a 19th-century shipping vessel in Florida.

When a mysterious structure made of wood and metal began to emerge from the sand in Daytona Beach Shores in Volusia County, Florida, last month, beach-goers put forward all sorts of theories about what it might be—possibly an old pier or bleachers left over from when NASCAR held races on the sand, per the New York Times’ Christine Hauser and Jesus Jiménez

But after examining the structure, which measures roughly 80 feet long, archaeologists have an answer: It’s actually a shipwreck.

To solve the mystery, researchers and volunteers dug a trench around the structure, which is still mostly buried, to get a better look. Their excavation revealed joints, ribs and curved wood that likely belonged to a privately owned merchant ship from the 1800s.

The team thinks it was a “cargo-carrying vessel that would have sailed in sight of land up and down the coast,” says Chuck Meide, a maritime archaeologist and director of the research arm of the St. Augustine Lighthouse & Maritime Museum, to the Times.  Using historical knowledge of maritime routes, Meide adds that if the vessel was transporting fruit, it may have been traveling north from the Caribbean. If it was ferrying manufactured goods, then it was likely traveling south along the coast. “Imagine as many Amazon trucks that you see on the roads today—this was the equivalent in the 1800s,” says Christopher McCarron, a maritime archaeologist at the museum’s research program, to Fox 35 Orlando. 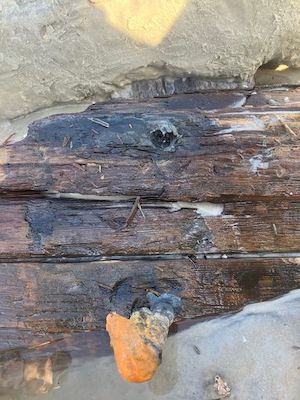 Archaeologists took 22 samples of the wood, and they hope further analysis will reveal even more about the ship.

Any attempt to remove the mysterious vessel would be expensive and labor-intensive. For now, it will stay in its final resting place under the beach, where it’s well protected by the sand.

“We will let Mother Nature bury the wreck,” Meide told the Associated Press’ Mike Schneider and Freida Frisaro. “That will help preserve it. As long as that hull is in the dark and wet, it will last a very long time, hundreds of more years.”

As the Times notes, the wreck is also protected by a Florida law that prohibits people from removing, defacing, destroying or altering archaeological specimens.

Beaches erode naturally over time. But this fall, the two storms—Hurricane Ian in September and Hurricane Nicole in November—sped up the process in Florida.

After Hurricane Nicole battered Florida’s east coast last month, some beachfront homes and buildings in Daytona Beach Shores crumbled onto the sand. Beach-goers and lifeguards were near those collapsed structures when they first stumbled upon the shipwreck sticking out from the beach over Thanksgiving weekend.

“This erosion is unprecedented at this point,” says Tammy Malphurs, deputy chief of Volusia County Beach Safety, to WKMG-TV’s Molly Reed. “We haven’t seen this kind of erosion in a very long time. I’ve been on the beach probably 25 years and that’s the first time I’ve seen [the shipwreck] exposed.”