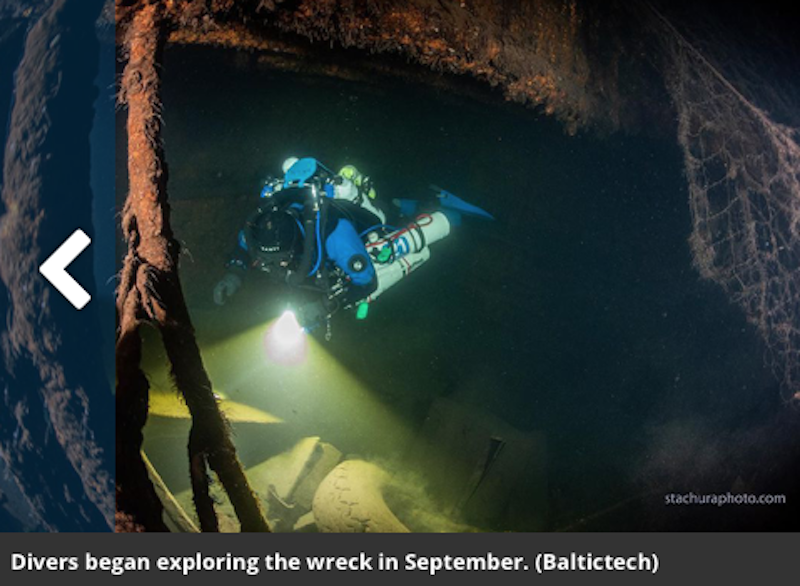 On April 13, 1945, Soviet planes sank the German steamer Karlsruhe in the Baltic Sea, killing almost 1,000 people. Now, divers say they’ve found the wreck—which could hold remnants of the famed Amber Room—some 300 feet under the sea off the coast of Poland.

“It is one of the last unresolved mysteries of the Second World War,” technical diver Tomasz Stachura, president of the SANTI diving equipment company and co-founder of the international Baltictech Conference, tells Atlas Obscura’s Isaac Schultz.

As Monika Scislowska reports for the Associated Press, Baltictech used Allied, German and Soviet documents to research the steamer. After spending more than a year searching for the wreck, the ten-member diving team announced in September that it had located the ship’s remains. Initial expeditions revealed military vehicles, china and sealed chests stowed away in the ship’s hold.

The AP reports that Soviet forces sank the Karlsruhe while it was participating in Operation Hannibal, a large-scale evacuation that transported German citizens and Nazi soldiers out of Königsberg in East Prussia as the Red Army advanced on the area.

“Karlsruhe was an old small ship, but in those days, any ship capable of evacuating people to the west was important,” says Baltictech in a statement. “She set off on her last voyage under extremely tight security with quite a heavy load.” According to Baltictech, the Karlsruhe—built in 1905—was about 218 feet long and 33 feet wide. At the time of its destruction, the ship was part of a convoy headed toward the German port of Swinemunde, which is now Swinoujscie in Poland.

Nazi Navy reports studied by Baltictech suggest that 1,083 people, the majority of whom were German civilians, were on board the Karlsruhe when it sank. The ship also contained 360 tons of “returnable goods.”

Per the statement, the Karlsruhe sank within three minutes of the Soviet planes’ attack. Other ships in the convoy only managed to rescue 113 passengers.

The divers speculate that the wreck may hold the remains of the Amber Room, a spectacular space that has been called the “Eighth Wonder of the World.”
Frederick William I of Prussia presented the room, made of several tons of amber encrusted in jewels, to Russia’s Peter the Great in 1716. As Jess Blumberg wrote for Smithsonian magazine in 2007, Czarina Elizabeth had the room installed at the Catherine Palace in Pushkin in 1755; just under 200 years later, in 1941, the Nazis looted the Amber Room and reinstalled it in a museum in Königsberg, Germany (now Kaliningrad). As Allied forces bore down on the city in late 1943, the Nazis dismantled the opulent room once again, crating it up for safekeeping. 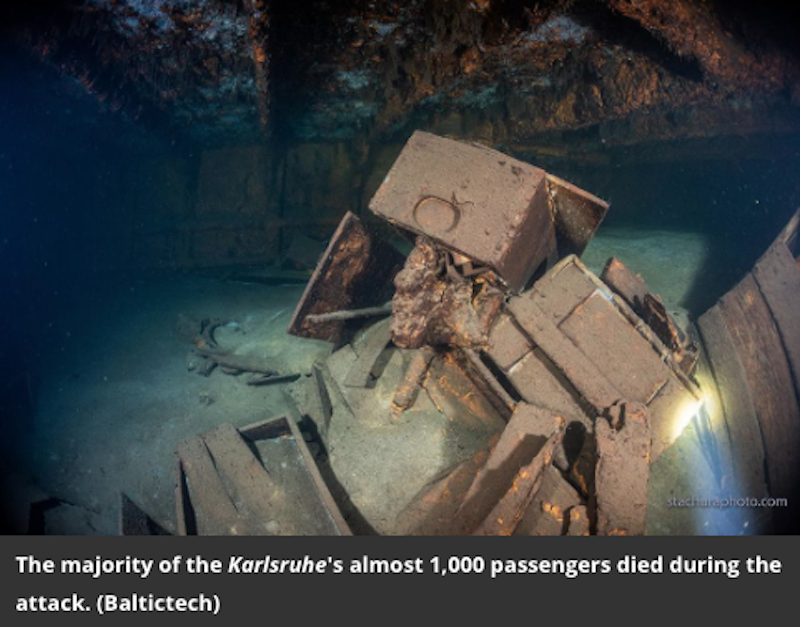 The Amber Room’s location has remained a mystery ever since. Though the majority of historians believe the panels were destroyed by bombing raids, some argue that the crates are still in Kaliningrad—or lying at the bottom of the Baltic Sea.

In a remarkable coincidence, another sunken Nazi warship also named the Karlsruhe was discovered off the Norwegian coast earlier this year. That ship sank in 1940 at the start of Germany’s invasion of Norway.