Did the Northern Lights Play a Role in the Titanic’s Demise? 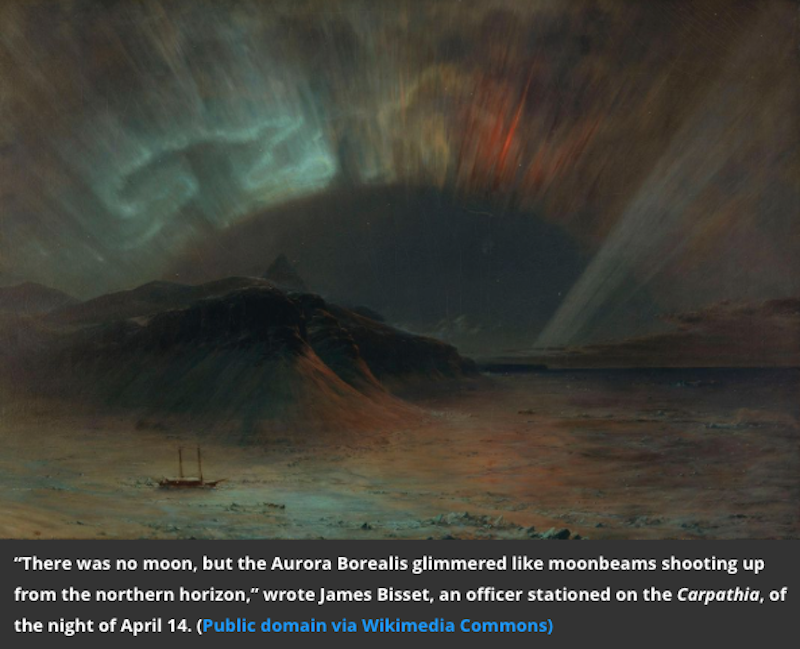 The R.M.S. Titanic sank on a moonless night in April 1912—but the sky wasn’t completely dark. Instead, the Northern Lights shimmered green overhead.

Formed when the charged particles of a particularly strong solar storm hit Earth’s magnetic field, exciting oxygen and nitrogen in the upper atmosphere, the Northern Lights, or aurora borealis, illuminate the sky in a stunning display of swirling colors.

As Mindy Weisberger reports for Live Science, the solar storms responsible for this light show can disrupt magnetic signals and radio waves. Such interference, argues independent Titanic researcher Mila Zinkova in a newly published paper, may have contributed to the luxury liner’s untimely demise.

Writing in the journal Weather, Zinkova outlines evidence linking the Titanic’s sinking to the celestial lights. Among other factors, she points out that the solar storm’s charged particles could have thrown off the ship’s compass, placing it on a collision course with the iceberg widely blamed for the disaster. “Even if the compass moved only one degree, it already could have made a difference,” Zinkova, who is a retired computer programmer, tells Hakai magazine’s Chris Baraniuk.

James Bisset, an officer assigned to the R.M.S. Carpathia, which rescued 705 survivors from the sinking Titanic, described the April 14 light show in his logbook. There was no moon, but the Aurora Borealis glimmered like moonbeams shooting up from the northern horizon,” he wrote, as quoted by Live Science. Five hours later, Bisset added that he could see “greenish beams” as the ship approached the Titanic’s lifeboats.
Another witness of the night’s events, survivor Lawrence Beesley, later noted that the aurora borealis’ glow “arched fanwise across the northern sky, with faint streamers reaching toward the Pole-star.”

According to NASA, solar storms known as coronal mass ejections send a wave of electrified particles into space. When Earth is caught in the wave, the charged particles travel along the planet’s magnetic field, interacting with oxygen, which produces red and green light, and nitrogen, which generates blue and purple light.

The planet’s magnetic field protects Earth from most solar storms’ effects. But severe space weather can still interfere with magnetic equipment like compasses, as well as the electrical grid and space traffic, reports Caroline Delbert for Popular Mechanics. Today, some people store precious digital records in Faraday cages to protect them from electromagnetic pulses.

Zinkova suggests that a solar storm may have pulled the Titanic’s compass needle in the wrong direction, steering the ship off course. If the Carpathia’s compass was similarly affected, she argues in the paper, the interference may have inadvertently guided the steamer to survivors, making up for the fact that the original SOS signal had directed the Titanic’s rescuer to a spot almost seven miles away from its actual location.

The study also posits that the solar storm affected the Titanic’s radio transmissions. The nearby La Provence didn’t pick up the Titanic’s signal, according to Hakai, and the Mount Temple’s responses never reached the sinking ship.

Speaking with Hakai, historian Tim Maltin, who has previously studied the impact of optical illusions on the collision, says he agrees that a solar storm probably occurred on April 14, 1912. But, he adds, “I think it was not a significant factor” in the disaster.

A 1912 Congressional investigation attributed the sinking to failures of ship design and crew protocol, as well as amateur radio enthusiasts jamming the airwaves used by professional ships. In response, the legislative body passed the Radio Act of 1912, which required all radio operators to hold a federal license, ensured ships stayed on alert for distress signals and limited the frequencies available for use by amateurs.