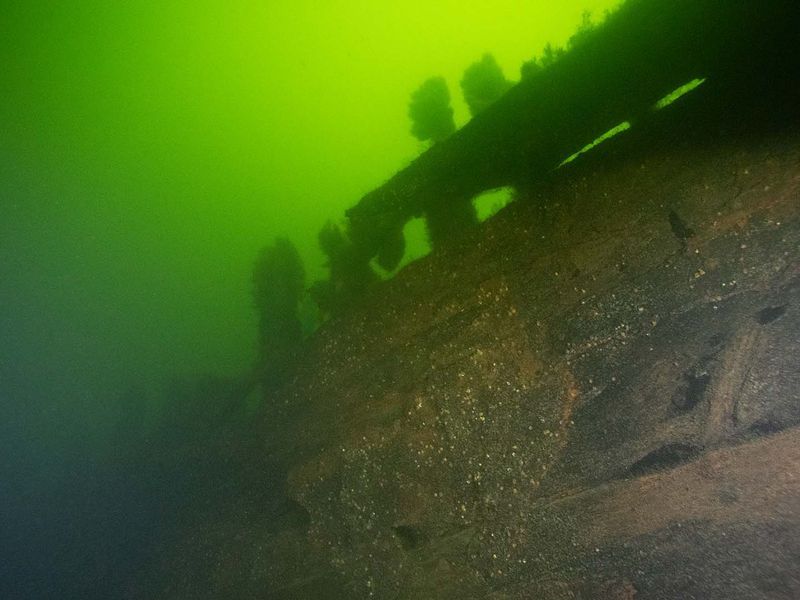 Marine archaeologists discovered the wrecks of two well-preserved 17th-century warships off the coast of Vaxholm, a Swedish island near Stockholm, last Tuesday. Per a press release from Stockholm’s Vrak Museum of Wrecks, researchers suspect one of the vessels is the sister ship of the famed Vasa warship, which sank in the Baltic Sea in 1628 but was recovered in 1961.

“When I came down as the first diver, … I saw this wall five or six meters high and I came up and there was a massive warship,” archaeologist Jim Hansson tells Agence France-Presse. “It was a thrilling feeling.”

King Gustav II Adolf commissioned the Vasa as a symbol of Sweden’s growing maritime might in 1625, tasking master shipwright Henrik Hybertsson with construction of the vessel. On August 10, 1628, the day of the Vasa’s first voyage, the ship—equipped with 64 bronze cannons—was the most “powerfully armed warship in the world,” according to PRI’s Rhitu Chatterjee. Unfortunately, this distinction only lasted for several minutes: Less than a mile into the journey, a gust of strong wind struck the ship, sinking it in full view of a large crowd assembled to witness what should have been a decisive naval triumph. A total of 30 people died in the disaster.

Amateur archaeologist Anders Franzén found Vasa in 1956 after three years of failed search attempts. Workers salvaged the 300-year-old ship in 1961, and today, the reconstructed vessel serves as the centerpiece of Stockholm’s Vasa Museum.

As the press release notes, one of the newly discovered ships is believed to be roughly the same size as the 226-foot-long Vasa. Although the boat’s stern is broken, its bow remains in place, poking up around 16 feet above the seabed. The second of the two wrecks recovered is probably larger than the first.

Per AFP, the archaeologists think the ships were intentionally scuttled to block enemy ships from approaching Stockholm. Historical records suggest locals sank several large decommissioned warships—including Vasa’s sister ship, the Äpplet, or Apple—near Vaxholm during the second half of the 17th century in order to create “underwater spike strips.”

The team’s next step will be testing wood samples collected from the wrecks in hopes of dating the ships and perhaps even identifying where the lumber originated. “Then we can even see where the timber has been cut down and then we can go back and look in the archives and I think we have good chances to tell exactly which ship this is,” says Hansson.

The researchers are cautiously optimistic that the smaller ship found is the Äpplet. Launched in 1629, the vessel participated in Sweden’s invasion of Germany during the Thirty Years’ War but was largely sidelined in the aftermath of the 1630 skirmish. Records state that the Äpplet was sunk in the strait off Vaxholm in 1659.

The team suspects the second wreck may be the Kronan (Crown), a ship launched in 1632, or the Scepter, a ship launched in 1634. According to the Vrak Museum, these vessels—also built around the same time as the Vasa—saw action during the 1640s and ‘50s but were sunk near Vaxholm in the 1670s.
Both wrecks appear to be in good condition, preserved by what the Local Sweden calls the “brackish waters” of Lake Mälaren.

“We don’t have salt water and some organisms that live in other waters don’t exist in the Baltic so it is very well preserved generally in our waters,” Patrik Höglund, another diver from the museum, explains to AFP.

Regardless of the ships’ true identities, the researchers say they have no plans of salvaging them, as leaving the wrecks in the water is likely the best preservation option. Around 95 percent of the Vasa’s wooden structure was intact upon its raising in 1961, but over the subsequent decades, the ship has faced various preservation challenges, especially from acidic conditions in the interior of the wood caretakers fear could weaken the ship’s integrity over time.