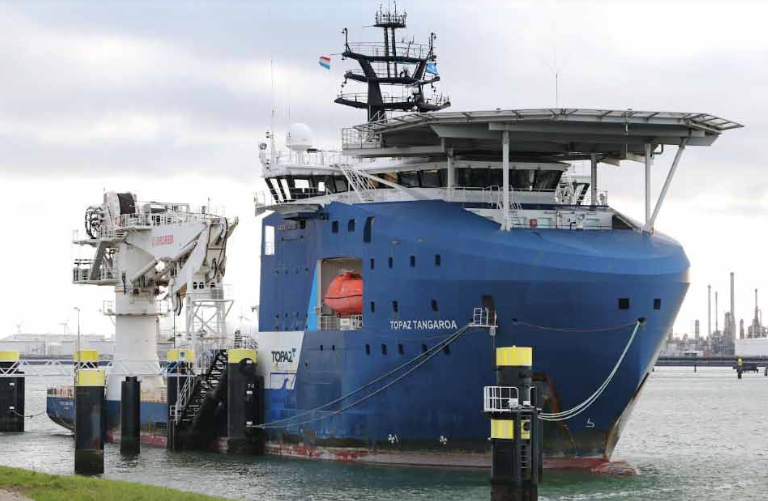 The offshore support vessel, MV Topaz Tangaroa has been purchased by the UK Ministry of Defence for conversion to a Multi-Role Ocean Surveillance (MROS) ship.

She will arrive at Cammell Laird shipyard on Merseyside this week for conversion and will serve in the Royal Fleet Auxiliary renamed RFA PROTEUS. PROTEUS will be dedicated to safeguarding critical seabed infrastructure and will act as a ‘mother ship’, operating remote and autonomous off-board systems for underwater surveillance and seabed warfare. The vessel was purchased for £70 Million from Topaz Marine, a subsidiary of P&O Maritime.

This modern, 6,000-tonne ship was built in 2019 for work in the offshore oil industry supporting construction, maintenance and inspection work and is equipped to operate autonomous submersibles. VARD designed her and the hull was built by their Tulcea shipyard in Romania and fitted out at their Brattvaag facility in Norway.The ship has diesel-electric propulsion driving azimuth thrusters at the stern. A dynamic positioning system with powerful twin bow thrusters allows her to hold a precise stationary position when working over subsea installations. She also has good sea-keeping abilities, low fuel consumption and will be well suited to her new role. A ‘moon pool’ – a vertical shaft in the centre of the vessel provides a sheltered way for robot submersibles to be launched or recovered in high sea states. The 98.1 metre-long ship also has a flight deck, a heavy duty crane, 1,000 sq meters of cargo space and a working deck aft. She has previously been employed on undersea construction in the North Sea and more recently on a major wind farm project off Taiwan.

The conversion by Cammell Laird should be relatively straightforward, primarily painting her grey and the addition of light weapon mounts and military communications equipment. Otherwise, the ship is already in good shape for her new role and RFA Proteus will enter service in the summer of this year.

A second MROS ship will eventually be constructed from scratch to a bespoke design and is currently in the concept phase. Proteus will be operated by a small RFA crew of 26, augmented by about 60 RN specialists responsible for the undersea surveillance, survey and warfare systems. It is expected she will primarily operate from Portsmouth Naval Base, although RFAs are not usually permanently base-ported like RN vessels. The procurement process has been rapid since the Secretary of State’s announcement in early November.

Spurred by the serious threat of Russian interference with subsea assets, the MoD has been scrambling to put this project together in a short time frame. The ship acquisition is relatively simple but in parallel, the RN has been working to procure and equip her with suitable ROVs and UVVs to perform the surveillance task. A cadre of operators will need to be trained up and develop a close working partnership with industry and the owners of the infrastructure. There are thousands of miles of subsea pipes and cables to be monitored and RFA PROTEUS is just one small step in the right direction to improving security. With MROSS(1) and its submersibles in service, the UK will at least be able to begin a programme of surveillance of its undersea infrastructure and will have a vessel ready to respond to interference, make assessments and potentially assist in making repairs should they be required.

A second ship, the MV ISLAND CROWN, (currently in Norway) has also been purchased by the MoD and is also due to be converted later this year into a mother ship for RN autonomous mine warfare boats. She will also serve in the RFA although her new name has yet to be decided upon. She is likely to be based at Faslane and will operate in support of mine countermeasures tasks around the UK and in European waters. 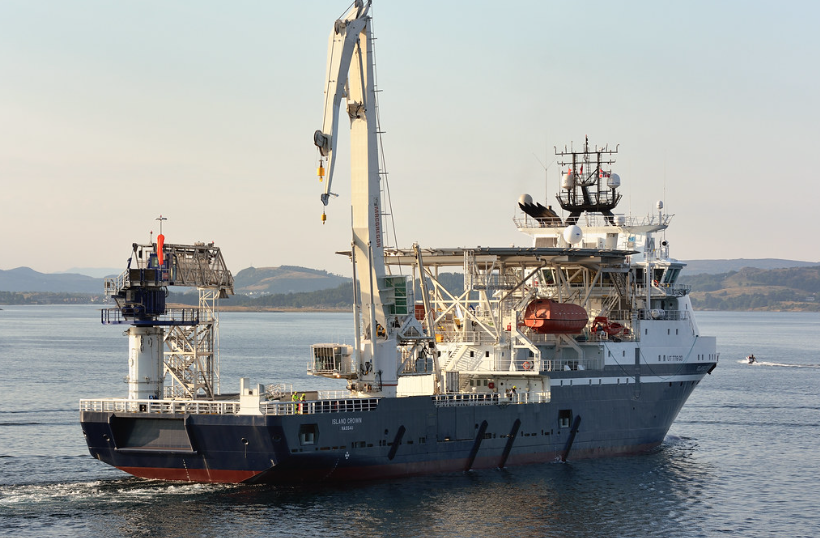 ISLAND CROWN is slightly smaller than the TOPAZ TANGAROA, designed primarily as an accommodation and ‘walk to work’ (WTW) vessel to safely deliver personnel to and from offshore energy installations. She was also designed and built in Norway and was completed in 2013. She has a 561 sq metre working deck, helideck and accommodation for up to 100 people. More details on this project to follow as they become available.