Size matters in the dark fleet 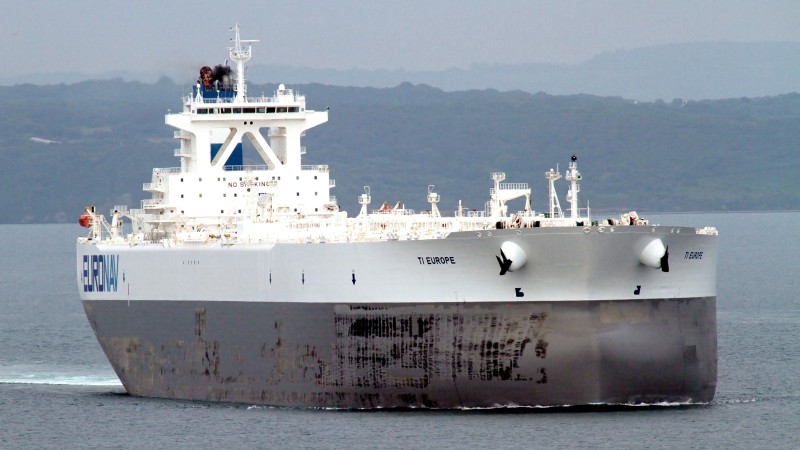 The “big” news in the two months of September and October 2022 was the sale of the 2002-built, 441,561-dwt EUROPE by public-listed Euronav to (at the time) an undisclosed buyer for storage.The Belgium-based operator reported the vessel  was debt-free and the sale generated a capital gain of US$34.7M. EUROPE has a Special Survey due in November 2022.

Euronav controlled the quartet of 3M-barrel ULCCs built at Daewoo in 2002 and 2003 and retains ownership of OCEANIA (2003, 441,585 dwt) and 100% ownership since July 2022 of FSO ASIA (2002, 432,023 dwt) and FSO AFRICA (2002, 432,023 dwt), with both ULCC vessels converted into purpose-built FSO vessels under long-term contract in Qatar. In 2018, Euronav acquired OCEANIA (ex- Seaways Laura Lynn) from International Seaways for US$32.5M.
These four ULCCs were the brainchild of Greek shipping tycoon Basil Papachristidis, whose company Hellespont Steamship, ordered the series of four new ULCCs at Daewoo for a reported US$98M each. Hellespont Steamship reportedly paid Daewoo an extra $10M above the normal standard for this type of tanker, with extra steel, a wider beam, Japanese engine beds and continuous inert gas injection and venting to remove oxygen from the rusting equation. A more obvious novel feature was the white hull topsides.

A known issue for VLCCs and ULCCs sat for months on storage duties in the broiling heat of the Middle East sun is the extreme expansion of deck plates.The reflective paint is said to keep the expansion within acceptable ranges, but inevitably, the ULCCs were labelled ’white elephants’. “Premium earnings have created a strong incentive for less scrupulous owners to get involved” Later reports pin-pointed the buyer of the ULCC tanker EUROPE now called SA EUROPE as VE Marine, a Singapore-based operator. The VE Marine fleet also includes the 307,000 dwt 2002-built VLCC SA CAPRICORN, the 300,300 dwt 1997-built FSO SA EQUATORIAL, and another FSO, the 338,595 dwt 2001-built SA Horizon. While the sale of EUROPE was largely transparent, many sales in the VLCC sector have not been.

Poten & Partners manager marine research & consulting Erik Broekhuizen noted in a paper* that many sales have been off-the-market and the so-called dark tanker fleet continues to grow. This dark fleet of tankers (aka shadow fleet or subterfuge fleet) consists of vessels that are involved in transporting sanctioned oil and has gained prominence as a result of US sanctions.

The ‘dark fleet moniker’ is linked to the tendency of vessels used in sanctioned trading to turn off or disable their automatic identification systems (AIS) in a practice colloquially called ’going dark’. AIS are transponders that provide location, position, identification and other information about a vessel for the purposes of navigational safety. After ex-President Trump withdrew the US from the Iran Nuclear Deal in 2018 and reimposed all previous sanctions on the country, Iran started to use a growing fleet of tankers to continue its oil exports (mainly to China). When Trump sanctioned Venezuela as well in 2019, the dark fleet expanded to include tankers exporting Venezuelan crude oil. The US- based organisation ’United Against Nuclear Iran’, which follows the Iranian oil trades closely, estimates the dark fleet had grown from 70 vessels in November 2020 to 257 just two years later.

Reputable shipowners do not want to get involved in these trades, which limits the supply of vessels available to those trading in sanctioned oil and products. This shortage in vessel supply has also made moving sanctioned barrels extremely lucrative. While this market is by nature very secretive, estimates from knowledgeable observers suggest that shipping rates for Venezuelan or Iranian barrels can be two or three times the market rate for legitimate voyages.
These premium earnings have created a strong incentive for opportunistic, less scrupulous owners to get involved in these trades. Given that the nature and longevity of these sanctions is very unpredictable, almost all tankers involved in these trades are older units. Owners of vessels buy them for the specific purpose of utilising them in these illicit trades, and they want to be able to earn their money back in a short period of time. In other words, the downside of an older (cheaper) ship is more limited. These owners buy old vessels (frequently vessels that would otherwise would have been recycled) and spend the bare minimum on repairs and maintenance.

The illegal nature of the business makes it impossible to use reputable crew managers and arranging proper insurance is difficult as well. To obfuscate the illicit nature of their employment, owners of these tankers frequently change the vessel’s name and ownership and flag them in jurisdictions that are known to be less strict.

As a result of these factors, the risk that these vessels are involved in accidents is elevated and so is the potential harm that could be inflicted on the crews and the environment in case of an oil spill.This dark fleet may grow substantially when the free flow of Russian oil is further restricted due to the implementation of the EU import ban and the G7 oil price cap, especially since President Putin has indicated he will not sell oil under the price cap mechanism. In apparent anticipation of the need for a larger dark fleet, sales of second-hand tankers have been brisk this year, despite the fact that prices for older vessels have increased markedly over time.

At least 60 VLCCs, 42 Suezmax tankers and 93 Aframax tankers have changed hands year-to-date, with an average age of more than 15 years. *Part of this article first appeared on Poten & Partners’ website.