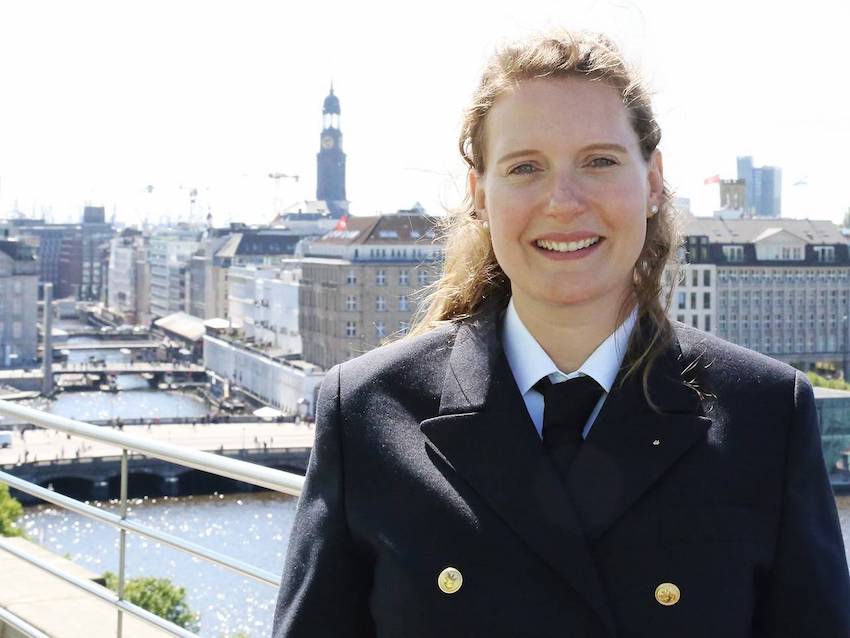 People often want to take photos of Taalke Middents on the container vessels she helps helm through ports and passages like the Suez Canal. That’s because she’s a rarity in maritime shipping: a female officer. When local pilots climb aboard to assist the crew in navigating the hulking ships in tight spaces, they’re often taken aback, but mostly welcoming, said Middents, a chief officer with Hamburg, Germany-based Hapag-Lloyd AG, the world’s No. 5 container carrier. As chief officer, Middents is second in command to the captain. On her most recent trip on the 368-meter (1,207 feet) Brussels Express, that most-senior role was also filled by a woman. “Some would take a picture with us and say, ‘there are two women doing this job — it’s no problem — maybe my daughter, my niece, my neighbor will be inspired by this,’” she said. Despite Middents’s experience, the global shipping industry remains frozen in the past on gender parity. Less than 2% of the world’s almost 1.9 million seafarers are women, and the disparity is one reason that shipping companies are expected to fall short of the additional 89,500 officers they’re expected to need by 2026. Flush with cash from record profits, shipping lines have made big promises to boost the number of women in their ranks, in some cases to as much as 50% of new recruits. The goals are particularly lofty in a pandemic era, with its own set of recruiting hurdles.

Convincing women to join a career that involves long, unpredictable stretches away from home in a mostly male, sometimes inhospitable workplace has always been a challenge, but the pandemic has made it an even tougher sell. While much of the world hunkered down at home and panic ordered sought-after goods, ship crews worked long past expired contracts to keep global trade moving and feed the unprecedented demand. Some seafarers even got stranded for months as travel restrictions prevented them from getting home.

“It was hard before Covid to attract people,” said Elpi Petraki, the newly appointed president of the Women’s International Shipping & Trading Association, or Wista. “Now it’s even harder.” Harassment, Discrimination

Big, publicly traded carriers like Hapag-Lloyd and Denmark’s A.P. Moller-Maersk A/S have plenty of reasons for wanting to hire more women. On top of the global shortage of staff, the International Maritime Organization, a United Nations agency that regulates shipping, has committed to the UN’s sustainability goals around gender equality. Meanwhile, multiple studies have shown sexual harassment and gender discrimination toward women is likely to be more prevalent in male-dominated workplaces.Last week, a US unit of Maersk said it settled a sexual assault lawsuit with a former employee, ending a case that led the world’s No. 2 container carrier to drastically change the way it manages staff on vessels. Maersk is now assigning its female employees to ships in groups of three to four, so no woman is alone at sea.

A recent survey suggests the threat of harassment on ships is widespread. When Wista polled 1,128 female seafarers from 78 countries, it found that almost 60% of respondents had encountered gender-based discrimination in the workplace, and 25% said physical and sexual harassment are common. About 90% of those polled worked on cruise ships, with the rest on cargo carriers, according to the data, which was released last month.

“The shipping sector is at risk due to a lack of new talent,” said Sanjam Sahi Gupta, the founder of Wista India. “One of the best and most effective strategies to stop the growing disparity is adopting gender-inclusive policies within a safe work culture.” Stephen Cotton, the general secretary of the London-based International Transport Workers’ Federation, said that increasing gender parity in shipping is a “massive challenge” given the culture change that’s necessary, especially for international crews who usually work under contracts. “The whole of the supply chain needs to look at itself to become a more inclusive culture for women,” said Cotton, whose organization connects nearly 700 trade unions from 150 countries.He said shipping’s transition to more digital operations and cleaner-burning fuels in coming years provides an opportunity to change the industry’s macho image and create conditions that might attract more women.Seafarers usually enter the industry one of two ways: either starting as a deckhand and working their way up the ranks, or through vocational study programs that offer a more academic route to a life on the ocean. Either way, it can be backbreaking work at times.Higher up the chain aspects of the job becomes more academic, especially as engines, navigational systems and other ship functions become more technologically advanced.

“I would say the job is more brains than muscles,” said Middents, who grew up in a small seaport on the northwest coast of Germany. She went through cadet training, drawn in partly by the breadth of the topics — from physics to navigation and medicine — that she needed to study for her officer training.
Work-Life Balance

Back in 2005, when Silke Muschitz started as an shipping apprentice — the training course required before college — there were just two women in her 37-person class. In 2018, she became the third woman to be promoted to captain of a Hapag-Lloyd container vessel, performing that job for two years before switching in 2020 to an executive position on land. As senior director of fleet management, she recruits at job fairs and highlights the variety of skills needed to work on an ocean-going vessel to budding engineers. For both male and female crew members, there’s a need to offer a better work- life balance, she said. Deployments of about three months or longer are typical for officers.

Long gone are the romanticized days when the seafaring life was a ticket to travel the world. “Yes, there are shore leaves from time to time and there are wonderful sunsets, but this is not how we can sell this job nowadays,” Muschitz said.

The change needed is also going to require fresh thinking on how seafarers are paid, the ITF’s Cotton said. “If you treat people like the hired help — especially as younger people become more immersed in their career opportunities — they don’t stay in the job,” he said. “All of our transport modes are struggling to recruit people.” The pay scale on container ships varies widely depending on seniority. An entry-level deckhand might make about $6,000 a year, while some captains earn salaries of $120,000 or more.

Despite the challenges, big shipping companies are setting themselves tough goals around gender equity. In May, Maersk announced the first cadet program for women in India, a country that accounts for about 10% of all seafarers of which just 0.5% are women. Its aim is to boost the share of female cadets to 50% by 2027, from a baseline of 7.6% last year.

French container line CMA CGM SA, meanwhile, wants women to be earning 30% of its top 200 salaries by 2025.In a report last year, the company found that women held a third of management positions, but only 12% of the top 100 paying jobs. It’s not clear how many of these are based at sea: as of late 2021, CMA CGM employed almost 83,000 people, including 5,344 international seafarers.

Hapag-Lloyd has three women captains in its German fleet out of a total of 84, with two more on track to reach that rank. This year, nearly 40% of apprentices in its German officer training class are women.“We might not to be where we want to be, but we’ve come a long way,” Muschitz said.