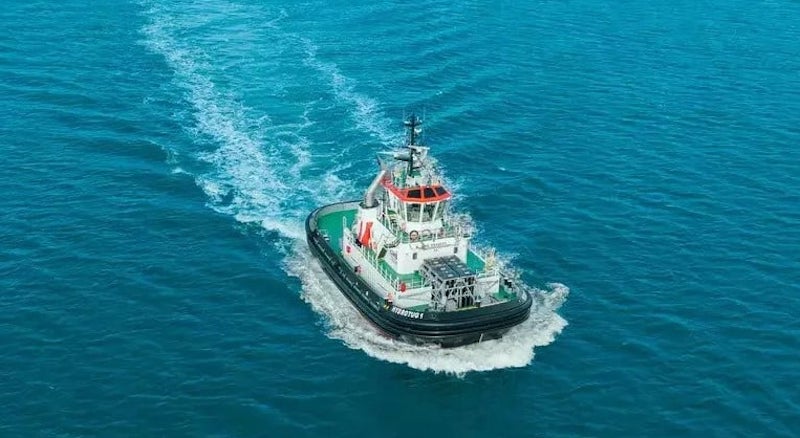 The Hydrotug 1, the world’s first hydrogen-powered tugboat, has arrived in the Port of Ostend, Belgium.

The tugboat was built at Armón Shipyards in Navia Spain where it hit the water on 16 May 2022.

Following the completion of the finishing touches, the tug arrived in the port of Ostend on Thursday 27 October, where it will be fitted with a hydrogen system. Following the installation and testing, the goal is to have the Hydrotug 1 fully operational in Antwerp in the first quarter of 2023, according to the Antwerp-Bruges port authority.

The port authority added that Ostend was chosen because the tug can use the hydrogen bunkering facilities of CMB.TECH’s Hydrocat 48 there.

The Hydrotug 1 consists of two BeHydro V12 dual-fuel medium-speed engines that can run on both hydrogen and traditional fuel. It can store 415kg of compressed hydrogen in 6 stillages installed on deck and eliminates the emissions equivalent of 350 cars.

The port ordered the tug in 2019 from Antwerp-based Compagnie Maritime Belge (CMB).

The Hydrotug 1 is part of an integrated greening programme for the Port of Antwerp-Bruges fleet and its transition to a climate-neutral port by 2050.
Port of Antwerp-Bruges wants to play a key role in the import, local production, processing, and throughput of green hydrogen and hydrogen carriers, such as ammonia and methanol.

The commitment is of particular importance as Belgium announces a revision of the country’s federal hydrogen strategy. To become carbon neutral, Belgium needs large quantities of renewable hydrogen, which is produced locally but will mainly have to be imported in large quantities. One of the goals of the strategy is to position Belgium as an import and transit hub in Europe for green hydrogen.