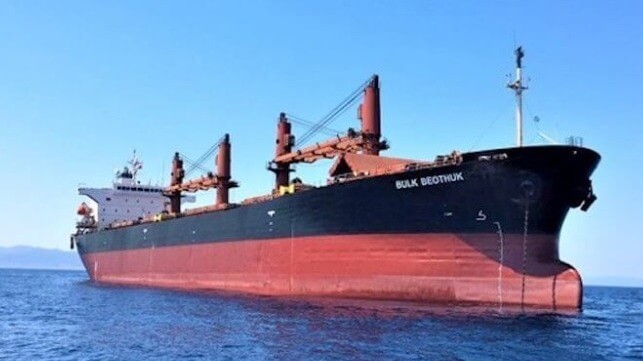 Liberia's maritime administration is investigating an incident aboard a Panama-flagged bulker in which two stowaways were allegedly killed.

Six Nigerian nationals arrived on a beach at Grand Cess, Liberia on September 12, including some who allegedly had injuries. They told local authorities that a total of 14 stowaways had surreptitiously boarded the geared bulker Ophelia at the port of Lagos, Nigeria on September 7 and had remained hidden for several days on the ship. However, when they became hungry, they reportedly banged on the hull to attract the crew's attention.

They alleged that at some point after the crew discovered them, some members of the crew sprayed them with hot water, killing two individuals. They identified the deceased as Nigerian nationals Frank and Osas Velurobo. They further alleged that the crew dumped the two bodies over the side.

Six survivors went over the side and swam to shore when the vessel was within a mile of Grand Cess' beach, Grand Kru joint security task force chief Chris Teah told Front Page Africa. Local fishermen from Grand Cess met the ship and recovered the other six stowaways - four from the deck of the ship and two more who were allegedly thrown in the water, he said.

Local officials in Grand Cess made arrangement for the 12 survivors to get to the Nigerian embassy in Monrovia for repatriation.

The Liberian Maritime Authority has promised to investigate the circumstances of the stowaway incident. In a statement, the Monrovia-based government agency said that it is in contact with the IMO, the flag state, the shipowner and regional port stae control agencies to get more information.

Ophelia is a 50,000 dwt bulker built in 2002. She is flagged in Panama and operated by a shipping firm in Qingdao, China. Her AIS signal has not been received by commercial tracking satellites since September 9.