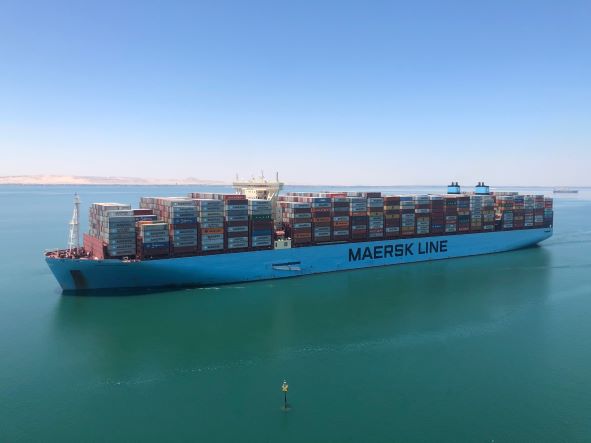 As the industry moves to decarbonize its fleet, numerous questions remain to be answered on the best pathways for shipowners given the uncertainty in relation to the future fuel landscape.

The report takes a deep dive into the technical, environmental, and techno-economic impacts of preparing container ships for conversion to green fuels in an attempt to de-risk investment decisions and provide shipowners with answers on what converting boxships to ammonia or methanol would entail.

The highlights build upon the results of the  ‘Green Fuels Optionality Project’, which used insights from a number of project partners to determine the technical requirement and costs of converting from fuel oil to methanol or ammonia or LNG to ammonia for containerships, bulkers and tankers.

The reference vessel used for this report is the container shipping sector is a 15, 000 TEU twin island containership.

Converting from fuel oil to methanol or ammonia
The project found that the accommodation was the most optimal location for the alternative fuel tanks on the boxship, as this position has the smallest impact on cargo space. However, tanks cannot be retrofitted in this position due to the existing ship structure, so vessels must be prepared for conversion at newbuild. When ships aren’t prepared, methanol or ammonia tanks must be installed in the cargo According to the project findings, methanol and ammonia dual fuel newbuilds should cost approximately 11 and 16% of a standard newbuild cost, respectively.

“We also calculated that conversion from fuel oil to a full-range methanol or ammonia dual-fuel vessel costs 10-16 and 19-24% of a standard newbuild cost, respectively, depending on the level of preparation at newbuild. For dual fuel newbuilds and conversions, converting to methanol is less expensive than converting to ammonia. This is partly because fuel tanks can be sized for methanol, installed at newbuilding and used for fuel oil before conversion. However, this is not possible for ammonia tanks, which are already more expensive than methanol tanks,” the center said.

Methanol and ammonia have a lower calorific density than fuel oil, so they require larger tanks to provide the same range as fuel oil vessels. The study used full-range tank volumes of 16,000 m3 for methanol and 20,000 m3 for ammonia, compared with 8,000m3 for fuel oil.space during conversion.

As a result, converting to full-range dual fuel vessels using these designs reduces cargo space by 240-610 and 530-1100 TEU for methanol and ammonia, respectively, with conversion of unprepared ships sacrificing most space. As explained, these cargo losses can cause a significant reduction in the earning potential of the vessel, so they must be carefully considered before planning dual fuel or conversion-ready vessels.

The center said that it modeled the impacts of lost cargo space on the total lifetime costs of converted vessels using its techno-economic model, which included add-on newbuild costs, conversion costs, and cargo loss costs depending on the number of years the ship is operated on fuel oil only before conversion.

“Our model showed that fully capable dual fuel newbuilds with full-sized tanks integrated from newbuilding are the most cost-effective option if you plan to convert vessels after a relatively short time operating on fuel oil only (5-8 years for full range conversion),” the report added. “For methanol conversions, a conversion-ready vessel is the best option from a total cost perspective if you are planning a medium-term conversion. For ammonia conversions, the cost difference between converting a prepared or unprepared vessel is minimal because the expensive tank system cannot be prepared at newbuild, so there is no medium-term option. “The significant cargo costs associated with converting unprepared vessels to methanol or ammonia mean that this strategy only makes sense after 8-10 years of operation when the increased earning potential from using the full cargo space before the conversion can balance out the increased cost of conversion and larger cargo losses after conversion.”

The center further pointed out that conversion costs and cargo losses can be reduced by converting to a reduced alternative fuel range. The proposed reduced range designs have a tank capacity of 10,000 m3 for methanol and 7.800 m3 for ammonia, resulting in a slot loss of around 400 TEU.

Although the range is significantly reduced, it is believed to be sufficient for traveling between Singapore and Southern Europe on ammonia. The reduced range conversion enables conversion CapEx to be cut to 9-12 % of a standard newbuild cost for methanol and 14-19% for ammonia.

“Our emissions analysis showed that the CO2 emissions from conversion are minimal, at around 0.3% of the lifetime emissions of a fuel oil vessel, and as converting to methanol or ammonia significantly reduces operational emissions after conversion, conversion is worthwhile from an emissions perspective,” Mærsk Mc-Kinney Møller Center said. 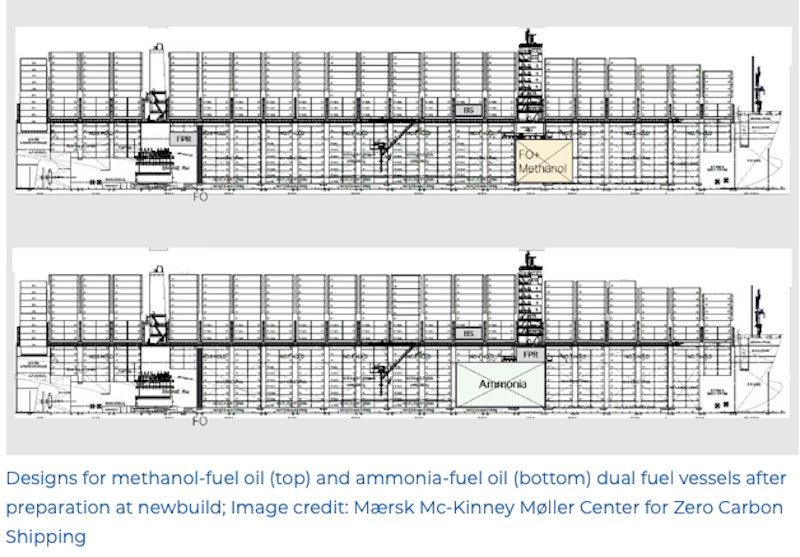 In cases where the existing LNG tanks cannot be prepared for ammonia, it will not be practically possible to replace the LNG tanks located under the accommodation, and as a result, conversion to ammonia would not be feasible. As a result, LNG vessels must be compatible with liquid ammonia storage from newbuild for a conversion to take place.

After conversion, these ships become ammonia-fuel oil dual fuel vessels and can no longer operate on LNG.

According to the report, the designs which prepare the vessels for later conversion, increase the cost of a newbuild by 7% and 2% for full range and reduced range, respectively, compared to a standard LNG-fuel oil newbuild. Conversion costs were 8% of an LNG newbuild, resulting in total additional costs for newbuild and conversion of 15 and 10% for full and reduced range. This is 33 and 28%, respectively, of a standard fuel oil newbuild cost.

“The additional costs of preparing a vessel for LNG, a larger tank for ammonia operation, and then converting to ammonia make this strategy relatively expensive. However, based on a normalized fuel market situation, operating on LNG rather than fuel oil before conversion offers fuel cost savings,” the report said. “We included fuel savings in our techno-economic model of this option, along with newbuild, conversion, and cargo loss costs. We found that LNG-ammonia conversions are cost-effective if conversion takes place after eight years of LNG operation for full-range vessels and one year for reduced range vessels. Again, the emissions associated with conversion were minimal and operational emissions were significantly reduced post-conversion.”