According to numerous reports, Carnival Cruise Line and Royal Caribbean Cruises canceled their itineraries to Ensenada, Mexico after a weekend of vandalism, looting and threats of mass violence by a drug cartel in that port city and other locations in Northern Baja. The Jalisco New Generation Cartel (CJNG), formerly known as Los Mata Zetas, burned vehicles in the area and threatened violence. 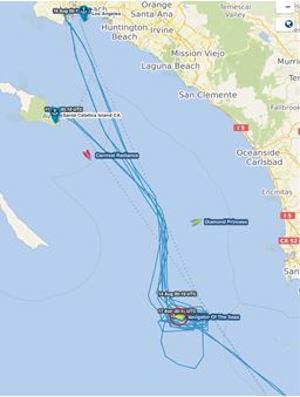 These two Miami based cruise lines, which sail from Long Beach, California to the west coast of Mexico, stopped calling on Ensenada this past weekend. AIS tracking systems show both the Carnival Radiance and Royal Caribbean’s Navigator of the Seas sailing in circles off the coast of Ensenada earlier this week.

Last Friday, the Mexican drug cartel sent a warning promising “mayhem on the streets” throughout the weekend unless some of its gang members were released from prison. Reports followed of automobiles being hijacked and burned, roadblocks being erected and stores being looted.

The Los Angeles Times reported that “messages also began circulating on social media, purportedly from the Jalisco New Generation cartel, declaring a curfew in Tijuana (about 100 kilometers of Ensenada) and warning residents to go home or risk being attacked.” The Times also reported that “hundreds of military troops and special forces had arrived in Tijuana to help restore order and reinforce security. Some 300 troops, along with 50 members of the national guard, were flown in to support 3,000 national guard troops and the 2,000-strong Tijuana police force that, according to the mayor, were already patrolling.”

According to the Border Report, the mayor of Ensenada, Mexico issued a public announcement that “cruise ships are coming back” after pulling out over security concerns for passengers and employees.

According to the mayor’s office, Carnival had “threatened to cease operations in Ensenada unless security measures for passengers were enhanced.”
The mayor claims that he obtained unspecified “assurances” from Carnival during a conference call Monday afternoon. “I’m very happy they confirmed the rest of their scheduled arrivals and they trust in the actions we’ve implemented,” Mayor Ayala Robles said. The nature of the so-called “security procedures” allegedly undertaken were not mentioned.

Carnival has not publicly stated that it has specific plans to resume its previous iteniraries to Ensenada. Royal Caribbean has been silent about this danger.

Selling cruises to Mexico has always involved being tricky. Gunmen robbed 22 Carnival passengers on an excursion in Mexico around ten years ago.

Back in 2012, Royal Caribbean and NCL cruise ships, which sailed to Mexico, repositioned from Los Angeles because of fears of violence in Mexico. We wrote numerous articles over a decade ago about the danger of drug-related violence and crime in certain Mexican ports of call.
An AP article from over a decade ago stated that although port officials and cruise industry representatives have tried to emphasize that most violence in Mexico takes place away from cruise destinations, this message has a hard time “competing with images of beheaded bodies on the news.”