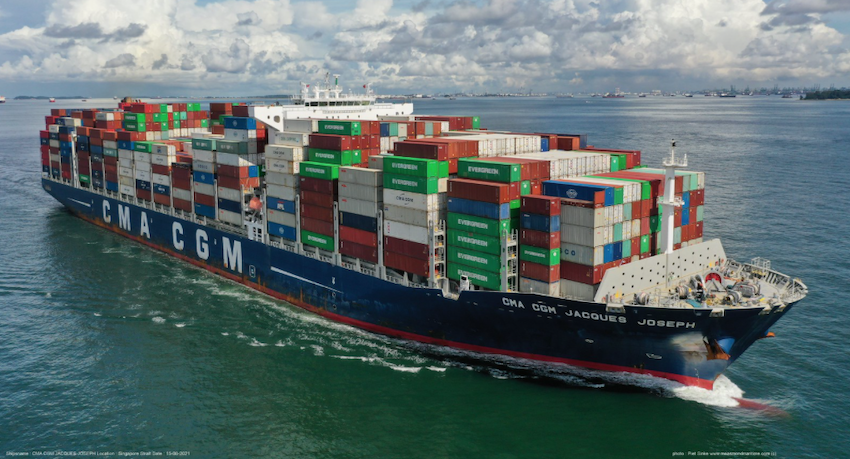 A new estimate sees $256 billion in net income this year

The world’s biggest container lines are on course to post profits in 2022 that will top last year’s record by 73%, according to a new forecast, buoyed by logistics and labor strains that are squeezing capacity amid sustained US demand for imports. Net income this year will likely reach $256 billion based on the 11 carriers monitored by industry veteran John McCown, the founder of Blue Alpha Capital. That’s an increase of $36 billion from his prior estimate in April and roughly equivalent to the gross domestic product of Portugal. The figure last year hit an all-time high of $148 billion, according to McCown.
“These profit increases are being driven by continuing increases in the rates in contracts that cover the large majority of loads actually moving on ships,” he said in an email. Even though spot rates have declined all year, they represent a small fraction of overall seaborne freight costs, McCown added. Two years of economic disruptions have transformed an industry that carries about 80% of global merchandise trade from a perennial money loser into one of the pandemic’s most surprising financial successes. Some are investing the cash influx in new ships with cleaner-burning engines and more digital links to land-based computer networks.The turn of fortunes, however, is fueling critics beyond the customers of ocean freight as inflation grips economies from Australia to Germany and politicians look for scapegoats. Some governments are increasing their scrutiny of shipping companies’ profits in defense of logistics workers whose livelihoods aren’t seeing a similar lift.In the UK, dockworkers at the country’s busiest container port are upset about wage gains that inflation is outpacing, so they’re threatening to strike later this month. On the West Coast of the US, longshoremen union leaders kicked off ongoing contract talks in May by blaming “foreign-owned, billion-dollar shipping companies that gouged American businesses by charging them 10 times the usual shipping rates and have contributed toward the rise in inflation.”

As economies around the world slow in the third year of the pandemic and with Russia’s war in Ukraine worsening shipping snarls, the rising tide of profits was expected to recede for container carriers. But they’re proving more resilient than they have in recent history, where they’ve fallen victim to boom-and-bust cycles. McCown is raising his outlook after a series of better-than-expected results for the second quarter were announced by some of the biggest shipping firms -- the latest of which was Taiwan’s Evergreen Marine Corp. on Friday.

Copenhagen-based A.P. Moller-Maersk A/S, the No. 2 player, earlier this month said it expects record profit of $31 billion in 2022. Hapag-Lloyd AG, ranked fifth, announced an improvement so strong that it now rivals Volkswagen AG as Germany’s most profitable company. The windfall comes despite an almost 30% decline in spot shipping rates tracked by Drewry since the beginning of the year. That’s because only 10% of ocean freight travels under spot-market terms -- the rest moves based on contracts between carrier and cargo shipper that spell out rates and volumes for a year or more, according to McCown. In McCown’s analysis, overall container-shipping pricing in the second quarter was 2.84 times higher than levels measured two years earlier. Average spot rates were 4.72 times higher, while contract rates are up 2.13 times. Maersk said Aug. 3 that the average contract rate this year is expected to be $1,900 for a 40-foot container, an increase of $500 from its expectation at the end of the first quarter. “The financial results published by the shipping lines show the impact of customers protecting their supply chains by negotiating long-term contracts,” according to a report Monday from UK- based Container Trade Statistics. “The fear of congestion in the supply chain has meant that corporates have chosen to play safe rather than risk a spot market.”

Big Three on the Oceans
The container industry, where nine of the largest companies are concentrated into three alliances that share capacity on vessels, has also seen more pressure from governments for charging soaring rates while performing a service where on- time delivery tracked by Sea-Intelligence is hovering at 40%.

In July, France’s National Assembly narrowly rejected a tax on windfall profits targeting energy and transport companies. Before the vote, Marseille-based CMA CGM SA -- the world’s third-biggest container line -- raised a rebate to 750 euros ($765) from 500 euros for shipments to France from Asia and added a discount on exports amid government pressure to curb inflation on household goods.

In the US, President Joe Biden has blasted the container carriers -- the largest of which are based in Asia and Europe. In June, he signed the Ocean Shipping Reform Act, a law passed with bipartisan support that directs the Federal Maritime Commission to prevent carriers from unreasonably refusing to fill open cargo space with US exports and investigate late fees charged by the container lines. The International Federation of Freight Forwarders Associations, a Geneva-based organization that represents 40,000 logistics firms, said the concern isn’t only about container rates but also whether the market functions free of distortions. “The price shocks to shippers, consumers and supply-chain intermediaries hinder recovery from the pandemic and other economic shocks in the recent past,” the group said in an emailed statement. “All affected jurisdictions globally should pay close attention through their competition authorities to ensure the market is not distorted, and put in place a mechanism to intervene quickly to protect shippers and consumers worldwide.”