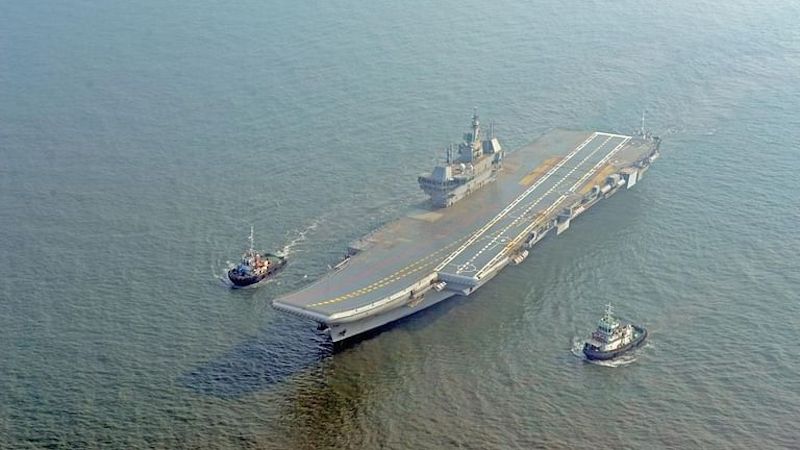 The Cochin Shipyard Ltd (CSL) delivered the first Indigenous Aircraft Carrier (IAC-1) to the Indian Navy here on Thursday. The acceptance form was signed by Madhu S. Nair, CMD of the shipyard, and Commodore Vidhyadhar Harke, Commanding Officer (Designate) of the vessel. The 262-metre-long vessel which can attain speed of up to 28 knots is scheduled to be commissioned and inducted into the Navy in the third week of August by Prime Minister Narendra Modi.

The IAC is the largest warship to be built in India, having a deep displacement of approximately 45,000 tonnes. Costing ₹20,000 crore, the vessel is a mammoth special-grade steel structure of 21,500 tonnes, developed indigenously and used in Indian naval ships for the first time. The indigenous content of the vessel is about 76%, says a CSL release.The enormity of the vessel can be gauged from the 2,300 km of cabling, 120 km of piping and over 2,300 compartments available on board

The vessel can accommodate an assortment of 30 fixed-wing and rotary aircraft, comprising MIG-29K fighter jets, Kamov-31 and MH-60R multi-role helicopters, in addition to indigenously-manufactured Advanced Light Helicopters (ALH) and Light Combat Aircraft (LCA-Navy).Using a novel aircraft-operation mode known as STOBAR (short take-off but arrested landing), the IAC is equipped with a ski-jump for launching aircraft and a set of ‘arrester wires’ for their recovery on board, says a Navy release.A major spin-off is the development and production of indigenous warship grade steel for the ship through a partnership between the Navy, DRDO, and the Steel Authority of India (SAIL), which has enabled the country to become self-sufficient with respect to warship steel.

The IAC will soon be commissioned into the Navy as Indian Naval Ship (INS) VIKRANT, which will bolster India’s position in the Indian Ocean Region (IOR) and its quest for a blue water Navy, it says.The basic design of the IAC was developed indigenously by the Directorate of Naval Design of the Indian Navy, while its detailed engineering, construction, and system-integration works were undertaken by the CSL.

The ship’s keel was laid in February 2009, followed by its launch in August 2013, making India join the elite club of nations that are capable of indigenously designing and constructing an aircraft carrier.

The maiden sea trials of the vessel was conducted in August 2021 and subsequently the vessel proceeded and successfully completed another four phases of sea trials. The naval design team acquired significant insight into the basic and functional design aspects of an aircraft carrier. The project also led to the enhancement of detailed designing and engineering capabilities of the CSL, which in turn helped overcome many production challenges, official sources said.

The shipyard has a long association with the Indian Navy in ship repairs, with all its aircraft carriers undergoing major refits and docking here. Currently, the yard is constructing eight anti-submarine warfare shallow water crafts (ASWSWCs) and also won an order for the construction of six next generation missile vessels (NGMVs) for the Navy.The shipyard is also augmenting its infrastructure, which includes a new dry dock to cater to the construction of even larger ships, including next-generation aircraft carriers, they added.