New vessel type could be needed to carry electric vehicles

SAFETY considerations surrounding electric vehicles are sufficiently different from those that apply to internal combustion engine vehicles that a new vessel type may be needed for their carriage, according to a P&I club safety specialist. Consideration should be given to vehicle spacing, which is governed by deck layouts, and the use of different firefighting equipment, said Simon Hodgkinson, head of loss prevention at West of England.

He was speaking after the loss of MOL Car Carriers’ 60,000 gt FELICITY ACE, which suffered a serious fire off the Azores in February, while laden with 4,000 new Volkswagen-Audi Group cars. This incident marked the latest in a long line of major car carrier casualties over the past decade, including HOEGH XIAMEN , GOLDEN RAY and GRANDE AMERICA. Questions are inevitably being asked about the safety of the vessel type, and insurers are responding by seeking higher premiums to reflect perceived greater risk. Investigations into Felicity Ace are still ongoing, and the causes of the fire may never be definitively determined, not least because the hull now sits on the seabed. But Mr Hodgkinson believes there is good reason to suspect that the casualty was at least aggravated by the presence of electric vehicles on board. Electric vehicles are less likely to start fires than internal combustion engine vehicles. But once they do, the fire is harder to put out.
“Older ships were designed to carry internal combustion engine vehicles, whether that is a pure car carrier, a car and truck carrier or a ro-ro. Design has not quite caught up with the changeover to electric vehicles,” he said. “In the perfect world, if you carry both types [of vehicles], you design the vessel to deal with the more difficult type to work with. That will be the electric vehicle, which is a bit more of an unknown and a bit trickier to work on.”

The internal combustion engine has been around for more than 130 years, and in terms of firefighting requirements, is pretty much a known quantity. Electric vehicles are a relatively new technology. What is apparent is that fires can create a state of ‘thermal runaway’ — when high temperatures cause a chemical reaction within a lithium-ion cell, resulting in it entering an uncontrollable self-heating state — which is difficult to deal with It is precisely this risk that caused airlines to ban some models of mobile phones from being carried on planes some years ago.Petrol and diesel driven cars are typically filled to around just 5% of fuel tank capacity, to facilitate a car being driven onto and off the ship. That is a relatively small amount from a firefighting viewpoint.

But electric vehicle manufacturers cannot afford to see their vehicles’ batteries go flat after leaving the factory and arriving at the dealer, so electric vehicles tend to be about 75% charged during their time at sea. That is a significant amount of energy to be converted to heat in the event of thermal runaway. Car carriers would prefer charging to be lower, in the hope that the situation will be more controllable if something goes wrong.“At the moment, there are debates between the companies transporting the cars and the manufacturers, and things are coming to an agreement as to what is the right level [of charging] when transporting a car,” said Mr Hodgkinson.

Once electric vehicles do ignite, the fire can spread rapidly to other cars, both ahead and behind them, and possibly above or below them on multiple decks separated by perforated steel, depending on the configuration of the car carrier.Spraying electric vehicle batteries with water cools them off, cooling down the heat and creating steam. But in the event of a fire, it is necessary to keep cooling efforts going until all energy has drained away. 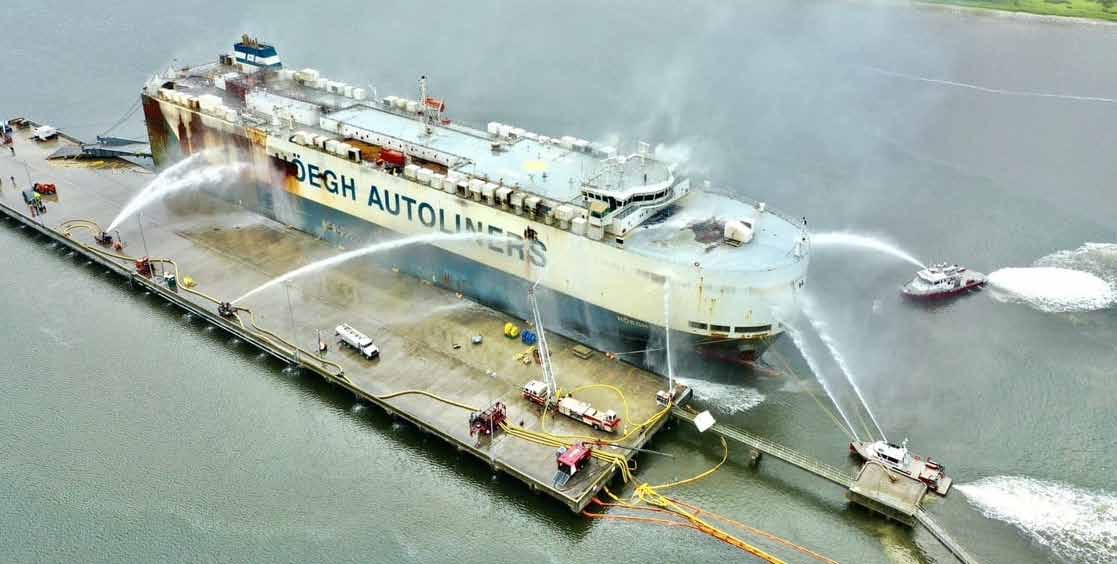 The issue here is that the amount of water that can be used in the hold of a ship is limited by stability considerations. So-called water mist systems developed for engine rooms over the past two decades may be more suitable for the task. These work by pushing water through a very small nozzle at very high pressure, creating artificial fog by reducing the size of water particles to microscopic levels, and thus massively increasing their overall surface area.

Firefighters may also be able to use lances to pump water directly into battery casings, a technique like that used to tackle fires inside containers. But the best thing to do is to prevent thermal runaway from occurring in the first place, which is best achieved by putting fires out while they are still small, or even better still, stopping them occurring in the first place.This can be done with the installation of extra closed-circuit television and additional thermal cameras, in a bid to detect danger as soon as possible. “If you can catch [the fire] before the thermal runaway has hit the ignition, you can constantly cool it until the battery runs flat.“If you can keep the fire to one car, you can probably contain it. If you allow it to get to 12 cars, you probably can’t.”

Second hand electric cars, which are starting to be shipped from first world countries to emerging markets, feature older technology and are not necessarily in the best condition, which can increase the firefighting challenges. The operator of Felicity Ace, Mitsui OSK Lines, stated soon after the vessel’s sinking that it had stopped taking bookings for used fully-electric cars on its pure car and truck carriers after ‘a review of its standards.’ “In future, there needs to be consideration given to developing a vessel purely to carry electric cars. Although they look the same, they are a different vehicle. They need to be treated in a different way to deal with the issues,” said Mr Hodgkinson.But while few vehicle carrier operators extol the virtues of their vessel fleets, with many of them being on time-charter rather than owned or managed, one operator, Höegh Autoliners, has been talking up its latest class of new pure car and truck carrier — the Aurora’ class, which is due to come on stream from 2024. The company has stated that its new ships will have far superior fire detection compared with previous ships and, crucially, dedicated spaces for electric cars.