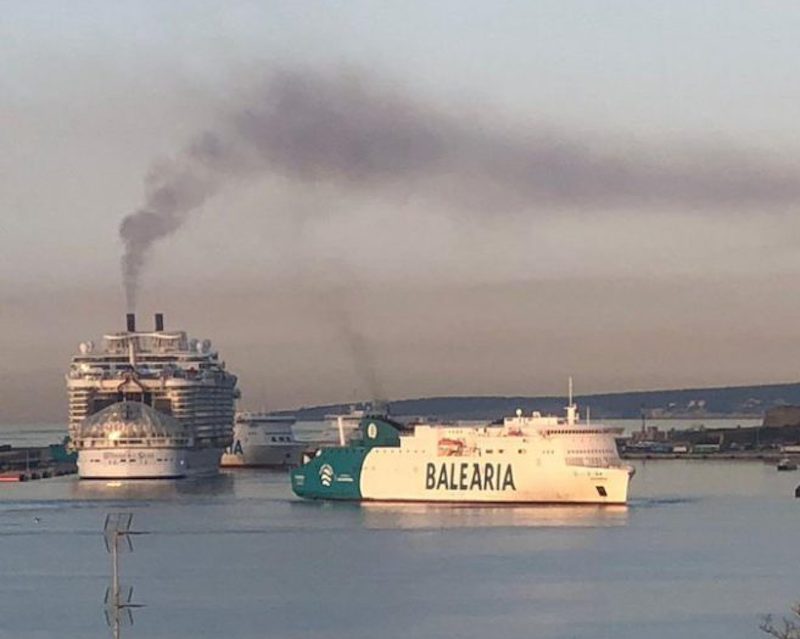 Two weeks ago, on May 3rd, the largest cruise ship in the world, Royal Caribbean’s Wonder of the Seas, arrived in Palma de Mallorca billowing a thick cloud of black smoke from its stacks.  The reality of this huge cruise ship belching out a huge plume of smoke over the Mediterranean port contrasted sharply with Royal Caribbean’s over-the-top marketing of the “World’s Newest Wonder” which touted two “advanced emission purification systems” which allegedly “remove 98% of sulfer emissions.”

Many residents, who tweeted images, of the toxic smoke emitting from the “mega cruise ship,”  denounced the “cloud of toxic smoke” over the city. A number of residents joined in retweeting the photos of the huge polluting cruise ship, with comments such as “The largest cruise ship on the planet arrives. The first thing it does is release a toxic cloud on Palma. They pollute, overcrowd, reduce health and pay tribute to tax havens . . . ”

The local newspaper, Diario de Mallorca, chronicled the protest in an article titled: The Megacruise ‘Wonder of the Seas’ in Palma: They Denounce the “Cloud of Toxic Smoke” Over the City. The newspaper reported that The Wonder of the Seas belongs to the latest generation of cruise ships that is characterized by its “gigantism.” It measures 64 meters wide, 362 meters long and a tonnage of 230,000 tons and can accommodate over 9,000 people (6,988 guests and a crew of 2,3000.

Comments made on social media include “the health and well-being of the population does not matter” and “because of its smoke, it robs us of our health.”

In addition to the protests ashore at the port, the protesters embarked on the Rafael Verdera sailing ship, which is the oldest active sailboat in Spain, to position themselves in front of the Wonder of the Seas with a banner stating that “we do not want any megacruiser in Palma.”

The newspaper also reported on the agreement reached by which Palma has become the first Spanish port – and the second in the Mediterranean after Dubrovnik – to limit the number of cruise ships to a maximum of three a day and, of them, only one can be a megacruiser with more than 5,000 guests and crew like the Wonder of the Seas.

Local ports which limit cruise ships do so for good reason. Cruise ships are a major source of air pollution which causes and/or contributes to a wide range of serious health problems such as respiratory ailments, lung disease, cancer and premature deaths. The pollutants from ship engines exhaust gases  include sulfur oxides (SOx) as well as non-combustible particulate matter and black carbon.

Heavy fuel oil (HFO), sometimes referred to as bunker fuel, has historically been a low cost favorite of cruise ships. HFO has tar-like consistency which results from the residue of crude oil distillation. HFO is contaminated with several different compounds including sulfur and nitrogen, which makes HFO emissions far more toxic compared to low sulfur fuels.
Bunker fuel cannot be used without incombustible particles flying all over the place – not unlike burning a tire – with the residue burrowing deep into the mucous membranes of your lungs. It should be considered to be a public nuisance and banned as such. No one reading this article would burn bunker fuel in their house, or subject their neighbors to this toxic pollutant. Bunker fuel is the nastiest and most toxic fuel you can use. But this fuel is the cornerstone of the cruise industry.

The smoke billowing from the Wonder of the Seas earlier this month appears not unlike the pollution we have seen from other large cruise ships, like the Royal Caribbean Symphony of the Seas, which was videotaped in 2019 belching smoke while leaving the port of St. Thomas, U.S.V.I., or the MSCVirtuosa cruise ship which was filmed billowing pollution while docked in the Isle of Portland, in Dorset U.K. last year.  There are many, many other examples,

Reporting on the Wonder‘s air pollution is certain to create the usual debate every time I post an article about a cruise ship burning high-sulfur bunker fuel bellowing smoke from its funnels. Defenders of the polluting cruise industry (who invariably do not live in the port community) will usually comment that the images do not show engine gases but condensed water vapor from the air stack “scrubber” operations.

Even if what we are seeing with our own eyes from the Wonder of the Seas is somehow water vapor as the cruise line wants us to think, and not toxic smoke, the ship would still be creating vast quantities of toxic sludge via its scrubber systems (which Royal Caribbean emphamistically calls “advanced emission purification systems”) which is routinely discharged as waste water. That is why many people say that scrubbers just turn air pollution into water pollution.