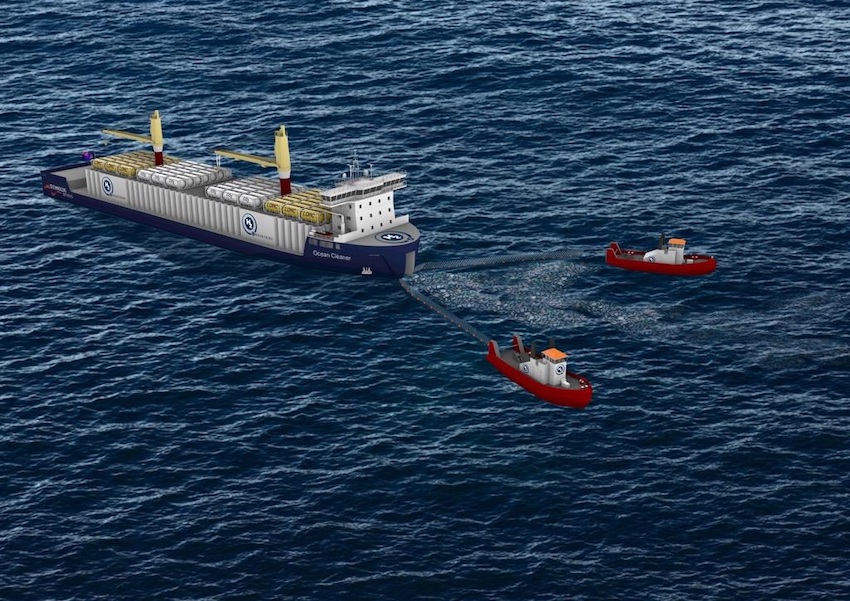 Plastic debris currently makes up 80 per cent of all marine debris found from surface waters to deep-sea sediments. In addition, at least 14 million tonnes of plastic end up in the ocean every year.

This new design for an innovative concept shows a ship that will collect plastic waste and then convert it into clean hydrogen, allowing surplus hydrogen to be shipped back to shore.

The vessel will be more than 150 metres in length. It is to travel at four knots with the waste plastic collected by two smaller vessels towing a two-mile net that funnels the waste from the surface and up to ten metres below it. The most novel feature of the vessel will be the open bow design that allows the collected plastic waste to be fed onto conveyors and into the storage hold.

This waste will then be converted into hydrogen by the same thermolysis process that the H2-Industries’ plants will be using onshore.  For every 600 kilograms of waste, approximately 100 kilograms of hydrogen can be produced and then, stored in liquid organic hydrogen carrier (LOHC) in 20-foot containers. These containers will be transferred to smaller vessels by onboard cranes for delivery to shore.

Due to the benefit of removing plastic waste from the ocean, hydrogen produced in this manner can be classified as “beyond green” or “greener than green”.
LOHC carrier fluids bind hydrogen chemically and the stored hydrogen is neither volatile nor capable of self-discharging. The LOHC can be hydrogen-charged and discharged only in combination with a certain catalyst. H2-Industries says its storage solutions work by charging and discharging the LOHC. The charging and discharging are independent processes using proprietary catalyst technology.