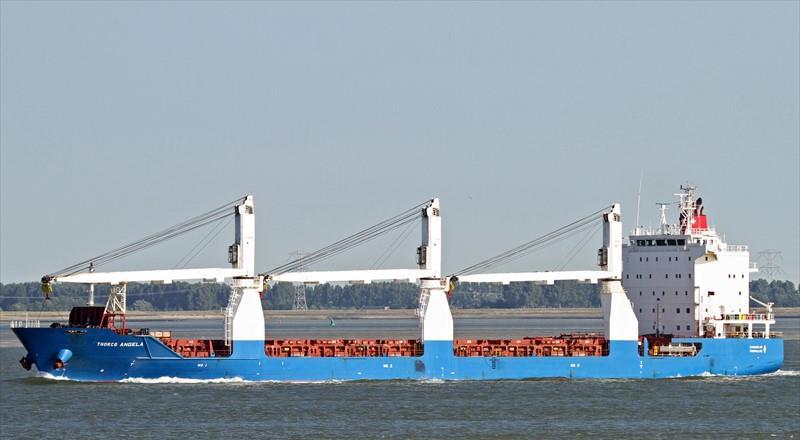 In July 2021, 8000t of bagged sweet potato product was loaded into the cargo holds of Thorco Angela in Rizhao, China. While loading, shore stevedores and, at a later time during the load, Thorco Angela’s crew, placed cans and pouches of aluminium phosphide fumigant between the bags of cargo. On 19 July, Thorco Angela departed Rizhao for northern Europe, and carried out scheduled crew changes during the voyage that included the master, chief officer, second officer and third officer.

At 1745 on 10 October, Thorco Angela berthed in Liverpool. At 1955, stevedores subcontracted to Peel Ports Liverpool started cargo discharge. The stevedores found open cans containing powder among the cargo and alerted their supervisor. At 2200, cargo work was suspended and the stevedores waited in a mess room on the quay.

In the early hours of the next morning, one of the stevedores became unwell and was taken to hospital suffering with nausea, loss of balance, and nerve damage to his hand; he had an extended absence from work while recuperating. After the accident, Thorco Angela’s crew removed some of the fumigant from the cargo holds. A specialist contractor subsequently removed 150kg of fumigant from Thorco Angela’s cargo holds.

The MAIB preliminary assessment identified that:
• The fumigant was provided to Thorco Angela by one of the cargo suppliers, but it was likely that specialist fumigators were not allowed to board Thorco Angela and deploy the fumigant due to the COVID-19 restrictions that were in force in Rizhao. Thorco Angela’s crew were not trained to deploy or remove the fumigant and the personal protective equipment they were wearing was inadequate for the task.

• Thorco Angela’s officers did not adhere to the company’s safety management system (SMS) or international guidelines on the use of fumigants. Consequently, the fumigant was incorrectly deployed and did not fully volatilise and disperse during the voyage to the United Kingdom.

• The risk presented by the cans of fumigant was underestimated when they were first found, which delayed the cessation of cargo discharge, and Peel Port’s emergency response procedure was not strictly followed.

• The stevedore ingested fumigant either while working cargo or while eating and smoking after leaving Thorco Angela.

Action taken
As a result of the MAIB’s preliminary assessment, The Chief Inspector of Marine Accidents has written to Peel Ports Liverpool advising them of the safety issues identified and highlighted the guidance regarding fumigated cargo emergency response planning detailed in the Department for Transport publication A Guide to Good Practice on Port Marine Operations.

The Chief Inspector has also written to Auerbach MARINE GmbH & Co. KG notifying them of the shortfalls in Thorco Angela’s officers’ actions and the failure of the company SMS

Peel Ports Liverpool has carried out an internal investigation into the accident and committed to the addition of cargo fumigation status to its vessel cargo work checklist and development of fumigation awareness training for its management, supervisors, and stevedores.
Auerbach MARINE GmbH & Co. KG has yet to advise the MAIB of the actions taken in response to this accident.