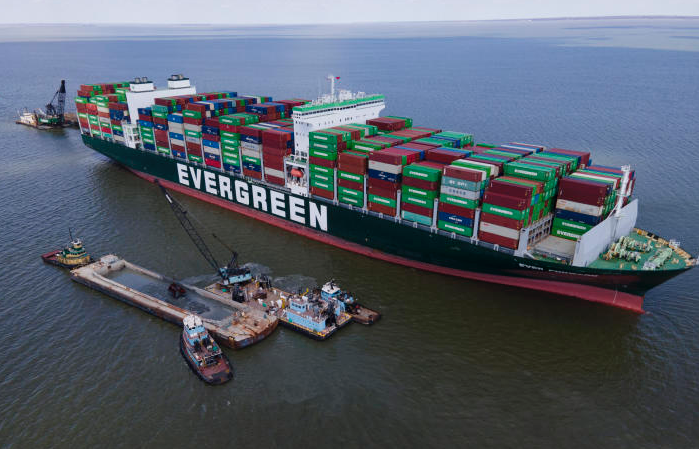 At long last, the Ever Forward is free.

After weeks of tugging, pulling, digging and dumping, the 1,095-foot cargo ship was pried from the muddy clutches of the Chesapeake Bay Sunday morning.

Two pulling barges and five mighty tug boats manuevered the massive ship backward and sideways until it was dislodged just before 7 a.m. Salvage crews harnessed the power of a full moon and a spring tide in a third and final push to free the ship that had sat stuck for more than a month. Coast guard officials have still not revealed how the biggest ship to ever be so stuck in the Chesapeake Bay missed a turn and jumped the narrow Craighill Channel, propelling into at least 18 feet of mud and silt the night of March 13. The blunder has created a national spectacle marveled by onlookers and mounted a logistical nightmare for marine engineers.

Following weeks of salvage operations, authorities turned to a costly last resort April 9 and began to remove containers from the ship. A crew assigned to two cranes rappelled up and down towering stacks of containers for 12 hours a day, every day, for the past week.

Crews continued to offload containers under bright moonlight until 10:30 p.m. Saturday, when pleasant weather turned into a night of fierce winds. Nearly 500 of the 5,000 large metal containers onboard were removed from the EVER FORWARD and placed onto barges, which returned them to the Port of Baltimore. The ship was traveling from Baltimore to Norfolk, Virginia, when it became wedged in shallow waters and was visible for weeks from the Eastern Shore and Pasadena. More than a month after running aground outside the shipping channel, the Ever Forward container ship was freed Sunday from the Chesapeake Bay mud. (Jerry Jackson/Baltimore Sun/TNS)

Exactly what the EVER FORWARD is transporting from China isn’t clear, though some items include a New York reporter’s furniture shipped from Hong Kong and 10,000 copies of a Los Angeles author’s recent graphic novel. The ship is owned by Evergreen Marine Corp., the same Taiwanese company that owns the Ever Given, which attracted international attention when it blocked the Suez Canal, a crucial channel for global trade.

Maryland law requires that a local, expert pilot join and guide a ship when it is moving in and out of state waters. The Association of Maryland Pilots has not replied to requests to comment, but a Maryland pilot was aboard the ship at the time of the grounding, U.S. Coast Guard officials said. Removing 10% of the ship’s cargo caused it to refloat by about half a foot, making enough room to reduce friction between its hull and the ground. The EVER FORWARD was then pulled across a dredged hole and finally into the safety of the channel’s 50-foot depth.

Dozens of dredging boats cycled through the bay, digging around the ship, which needs 42 feet of water to safely navigate, and dropping mud at Poplar Island in Talbot County. The powerful DALE PYATT, the largest clamshell dredge in the Western Hemisphere, was tapped for the excavation for its ability to scoop 60 cubic yards at once. At least 210,000 cubic yards of material were carried to Poplar Island, the size of 64 Olympic-sized swimming pools

Still, the EVER FORWARD did not budge until the month’s highest tide arrived Sunday and resurrected the stalled ship.

Once it refloated, the EVER FORWARD was weighed down again by water tanks to ensure safe passage under the Chesapeake Bay Bridge. Black smoke wafted from the ship’s engine, guided by taut tug boat lines that pulled it three hours to an anchorage south of Annapolis. Marine inspectors will now examine the ship’s hull to make sure it didn’t get crumpled from days of rocking against the ground.

If the hull is unharmed, the ship then heads back to the Port of Baltimore to reload the 500 captive containers before taking a second run at its journey to Norfolk.

The enormous effort to free a giant ship has created fanfare among both locals and far-flung Marylanders who travel to catch a glimpse of the celebrity boat. A line of cars patiently awaited the opening of Downs Park in Pasadena at 7 a.m. to watch the morning’s events unfold. Observers who dutifully check the ship’s movements, or lack thereof, started camping out in nearby neighborhoods to bypass the county park’s $6 admission fee.