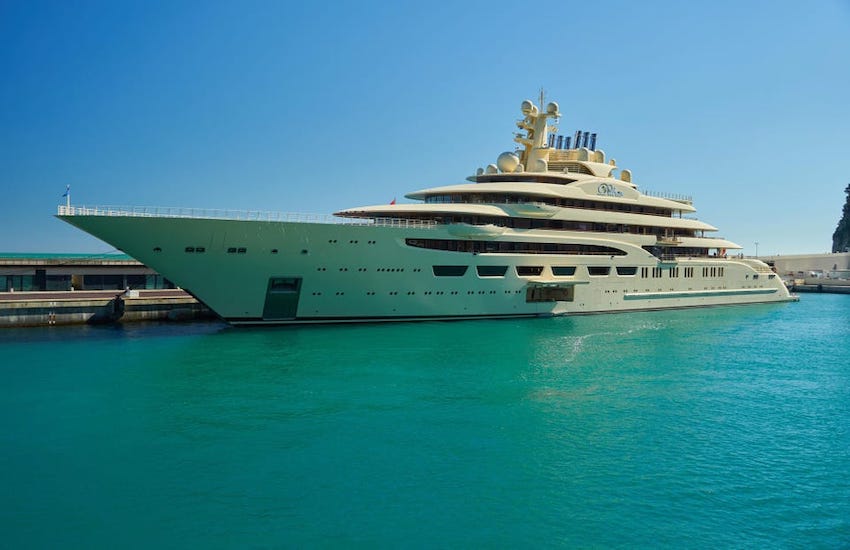 Russian billionaire Alisher Usmanov’s superyacht, the world’s largest by volume, was seized by German authorities in Hamburg, according to Forbes. The German government has frozen the DILBAR, Usmanov’s 512-foot yacht, the publication said, citing three unidentified industry sources. Built in 2016 and named after his mother, the boat is estimated to be worth $594 million, according to the Bloomberg Billionaires Index.

The European Union adopted sanctions on six of Russia’s wealthiest individuals on Monday, including Usmanov, who called the decision “unfair” and “defamatory.” The DILBAR had been undergoing refitting in the northern German city.

Superyachts and other opulent displays of wealth among Russia’s elite have drawn intense scrutiny since the country’s invasion of Ukraine, even making it into U.S. President Joe Biden’s State of the Union address. “We are joining with our European allies to find and seize your yachts, your luxury apartments, your private jets,” Biden saidduring Tuesday’s address.

Five other individuals were named in the latest EU sanctions: Mikhail Fridman, Petr Aven, Alexey Mordashov, Gennady Timchenko and Alexander Ponomarenko. Mordashov owns two superyachts: the NORD, which is in the Seychelles, and LADY M, anchored in Imperia, Italy.

Some Russian tycoons also still have superyachts docked in Europe. Roman Abramovich’s SOLARIS is in Barcelona; Iskandar Makhmudov’s PREDATOR is in Genoa, Italy; and Vagit Alekperov’s GALATIC SUPER NOVA is in Montenegro, among others, according to data tracked by Bloomberg.

Usmanov, 68, owns a major stake in USM, a Russian investment group with holdings in Metalloinvest, one of the world’s largest iron ore producers, and telecommunications company MegaFon. He’s the sixth-richest Russian with a fortune of $19.5 billion, according to Bloomberg’s wealth index, though that figure includes the DILBAR.

Russian President Vladimir Putin has also been sanctioned by U.S., EU and U.K. authorities. He has been linked by news organizations including Business Insider to the superyacht GRACEFUL. That boat left Hamburg Feb. 7, about two weeks before Russia invaded Ukraine. It’s now in Kaliningrad, Russia.