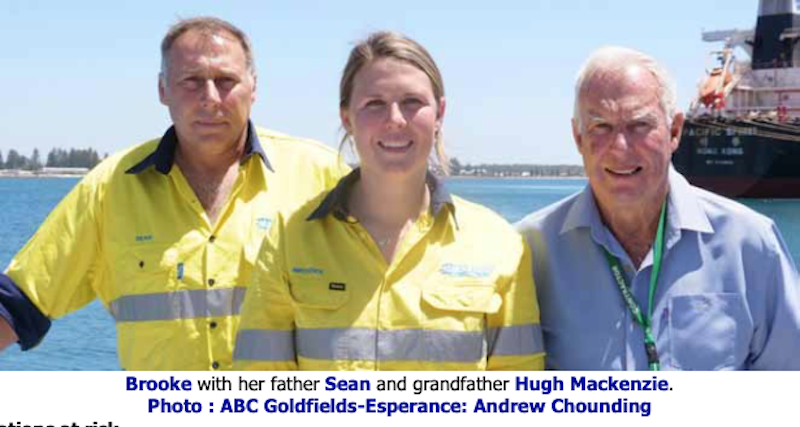 A family tug boat operator working in the port of Esperance for 50 years could lose the port as international competition grows. Multinational tug operators with deep pockets are outbidding small operators for regional port contract Mackenzie's Marine and Towing is family owned and has been operating in the port for the past 50 years.

Four generations at risk
The fourth-generation tug master has followed in her father's and grandfather's footsteps, working in one of the state's few deep-water ports capable of handling cape-size vessels.On any day, Ms Mackenzie and her crew move ships carrying grain, iron ore and cargo — weighing up to 200,000 tonnes — through the Esperance port.Ms Mackenzie hopes to one day lead the company started by her great-grandfather in 1972, but increasing competition from international operators has led to struggles for the business."We have a lot of pressure from the multinational companies," she said. "We are so small and isolated in WA and there is a lot of competition and multinational companies coming into Australia and WA." Brooke Mackenzie is the only female tug master working in the south-west of WA

Monopoly on WA Ports
The Esperance-based business recently lost a five-year Port of Bunbury contract to competitor Svitzer, the tug operator owned by global shipping giant Maersk.The contract tightened Svitzer's hold on the WA tug industry. The Danish-owned operator now holds contracts for nine ports in WA. Ms Mackenzie's father Sean Mackenzie is the company's general manager.After buying two new tugs to win the port five years ago, he said losing the Bunbury contract had taken a financial and emotional toll on the business. While competing with the likes of Svitzer was financially challenging, Mr Mackenzie said monopoly operators posed their own challenges. "We don't have the large bankrolls behind us," he said.

"A lot of these companies like to claim that because they operate across multiple ports in multiple countries that it makes them stronger. "Personally, I don't think that's the ideal solution." In November, Svitzer threatened to lock out almost 600 tugboat workers from 17 ports across the country following protracted negotiations with Australia's three maritime unions. The Fair Work Commission ultimately ordered the company to abandon the  industrial action after it was revealed the lockout would reduce shipping activity in affected ports by about 90 per cent. Maritime Union of Australia WA branch secretary Will Tracy said monopoly operators like Svitzer were the reality of the business but brought "inherent" problems. "Certainly there are problems where they can exercise their size and their chokehold on the Australian supply chain in the way that they did several months ago," he said.Competition for tugboat contracts in WA is expected to rise over the next 10 years in line with the resource sector. Mr Tracy said resource projects in the north of the state were building their own ports and he projected more would follow in the area between Dampier and Port Headland."There are several new operators in terms of resource projects that have come online that have their own ports, and so there's been an extra requirement for tug services in new ports that have arisen," he said. Mr Tracy said the challenge for independent operators was having the financial backing to scale up quickly to meet demand against a global competitor with deep pockets. "In an industry where the margins are that large, and where major players like  Switzer can run a loss-making enterprise to keep the competition out, it makes it very hard for small, family-owned enterprises to be able to expand," he said.

For Mr Mackenzie, the idea of losing the Esperance port, which his family has held for 50 years, is something he tries not to think about.

With a decade of local expertise on their side and a new tug arriving in February — bolstering the fleet from three to four — Mr Mackenzie hopes his daughter will be able to carry on the family legacy. But with competition for one of WA's key ports rising, he says the future is uncertain."As far as the future goes, Brooke will always have a role as tug master somewhere, whether it's here or another port," Mr Mackenzie said."She certainly has the skill set to go anywhere. Myself; I don't know."