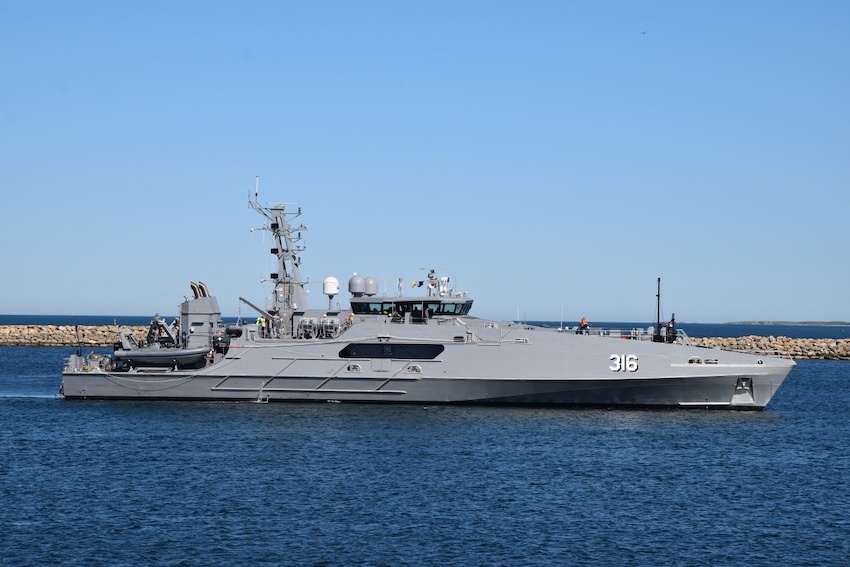 The vessel, ADV Cape Naturaliste, was officially accepted by the Commonwealth of Australia.

“Austal has now delivered three Evolved Capes to the Royal Australian Navy since the contract was signed in May 2020. Our productivity has improved with each new vessel, to the point where Austal is launching a new Evolved Cape after just 12 months construction. “The fourth vessel, the future ADV Cape Capricorn, is alongside now and we have four more Evolved Capes at various stages of production, here in Henderson.
“With the continued support of our trusted supply chain partners, the Austal shipbuilding team is well on track to deliver all eight Evolved Cape-class Patrol Boats to the Navy by mid-2024, on schedule.
“Austal is leading the way in delivering effective capability to the Navy and adding value to the National Naval Shipbuilding Enterprise and we couldn’t be prouder,” Mr Gregg added.

The 58-metre aluminium monohull patrol boat is the third of eight to be delivered to the Royal Australian Navy. The first two Evolved Cape-class Patrol Boats, ADV Cape Otway and ADV Cape Peron were delivered in March and August 2022, respectively.

The Evolved Capes feature new, larger amenities to accommodate up to 32 people, improved quality of life systems and advanced sustainment intelligence systems that further enhance the Royal Australian Navy’s ability to fight and win at sea. The patrol boats will be utilised for a wide variety of constabulary and naval missions and play a critical role in Australia’s national security, as a high-performing, reliable and effective maritime asset.

Austal Australia continues to employ approximately 400 people (directly) in Western Australia and is engaging more than 300 supply chain partners across Australia, to deliver the Evolved Cape-class Patrol Boat Project (SEA1445-1) for the Royal Australian Navy. In-service support for the Cape,

Austal Australia is also contracted to deliver 22 Guardian-class Patrol Boats to the Commonwealth of Australia under the Pacific Patrol Boat Replacement Project (SEA3036-1) and has delivered 15 vessels since 2018.