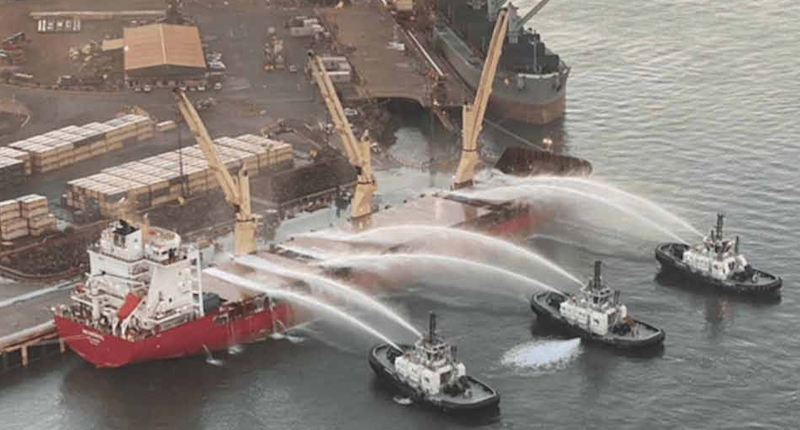 What happened
In the early hours of 25 March 2021, a fire broke out in the lower cargo hold of the general cargo ship BBC Rhonetal while it was alongside Port Hedland number two berth. The fire started during hot work to remove sea fastenings from the tween deck in preparation for cargo discharge operations.
Immediate efforts by the crew to extinguish the fire with deck hoses were unsuccessful and all persons safely evacuated the area before the hatch covers were closed and carbon dioxide using the ship’s fixed fire extinguishing system was released into the cargo hold. Shoreside fire authorities responded to the emergency and monitored the situation until the fire was declared extinguished on the morning of 28 March.

What the ATSB found
The ATSB found that the risk of fire had not been adequately assessed by the crew prior to commencement of the hot work. As a result, a continuous fire watch was not maintained and proper precautions were not taken to sufficiently protect vulnerable cargo from catching alight.
The ATSB also found that BBC Rhonetal’s managers had not effectively implemented the shipboard safety management system procedures to prevent the fire, which was the tenth such fire on a ship managed under the same parent company in the past 14 years, and the fourth investigated by the ATSB, identifying similar contributing factors.

What has been done as a result
BBC Rhonetal’s managers advised the ATSB that shipboard procedures for hot work will be amended to better describe the fire watch role, emphasising its importance in fire prevention. Fire watch requirements will be integrated into the hot work permit procedure and additional equipment for the fire watch is to be distributed across the fleet. The company also intends to educate ship crews on the amended procedures and the additional equipment through a training video with shore-based staff further reiterating safe hot work practices during shipboard inspections.
The ATSB considers that the proposed safety action has the potential to address the safety issue concerning the hot work procedures. However, as no timeline for implementation was provided, the ATSB issued formal recommendations to BBC Rhonetal’s managers, and the parent company, that the proposed safety action be implemented across their fleets.

Safety message
The continuing incidence of fires in the cargo holds of ships while performing hot work highlights the importance of adhering to shipboard procedures and recognised safe work guidelines for hot work.

Ship operators and managers must ensure that their safety management system protocols for hot work are suitable and properly implemented on board their ships. This requires regular verification that ships’ crew understand and follow prescribed safe work practices for hot work.