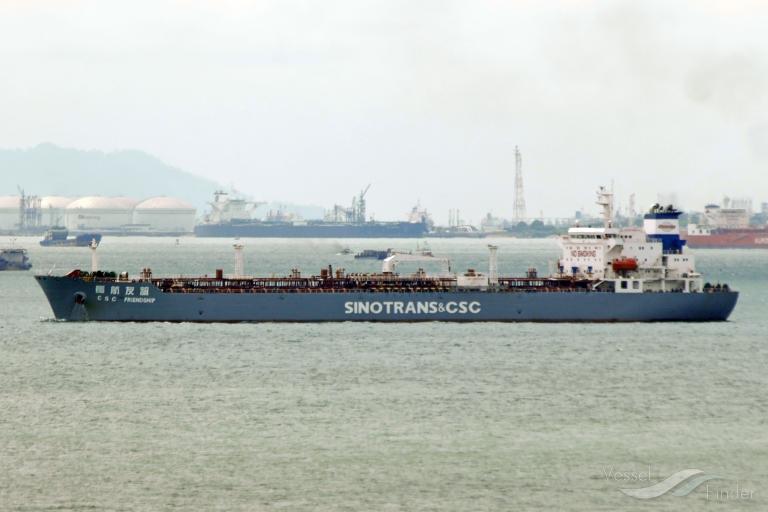 THE AUSTRALIAN Transport Safety Bureau has released a preliminary report into the breakaway and grounding of CSC FRIENDSHIP in Port of Brisbane earlier this year. The Hong Kong-flagged oil tanker had been berthed at the Ampol Products Wharf in late February as intense rainfall and flooding wreaked havoc at Port of Brisbane. CSC FRIENDSHIP was chartered by to backload 25,000 tonnes of diesel oil and 7000 tonnes of gasoline at the Ampol wharf to deliver to Adelaide. The ship was fully loaded by 2020 on 26 February. At the time of the grounding, the ship was owned by Fu Ning Marine, managed by Nanjing Tanker Corporation and had a Chinese crew of 25 personnel.

According to the ATSB, at the time of the incident on 27 February, the crew felt a sudden surge through the ship before the centre aft stern line parted suddenly, increasing the load on the 13 remaining mooring lines. “The crew quickly mustered, powered up the ship’s mooring winches, and prepared to bring the ship’s main engine online,” ATSB said in the report. “The ship’s mooring winch drums slipped on the brake under the increased load, the ship picked up momentum and surged downstream along the berth.

“One forward spring line, two aft spring lines and an aft breast line parted a short time later. The ship continued to break away downstream, causing the gangway to strike berth loading booms before falling away from the ship’s side onto the wharf.” ATSB said the ship came to rest around 90 metres further down the berth, secured only by the 9 remaining mooring lines. Two assisting tugs had minimal effect in moving the ship, and as a third tug prepared to join the effort, Brisbane VTS arranged for a pilot to urgently attend the vessel to help bring it back alongside. “About 0028 on 28 February, with the two tugs unable to hold the ship alongside and the river current not abating, CSC Friendship broke free of the berth. “The ship was swept downstream, across the channel and grounded east of and abeam Clara Rock beacon at Lytton Rocks Reach. A short time later, the additional tug, Svitzer Newstead, arrived.” After recovery attempts and further groundings, the pilot was able to gain control of the ship. Once underway, the ship transited downstream without further incident and anchored at the ship-to-ship transfer anchorage at around 0645.

According to the ATSB, crew inspections, internal tank soundings and an underwater hull survey on 3 March confirmed some shell plate damage, including buckling and abrasion of the hull. No injuries or pollution resulted from the grounding. On receipt of a conditional safety construction certificate from China Classification Society, CSC FRIENDSHIP was permitted to sail to Botany Bay to discharge cargo, then directly to China for dry dock and repair.

So far, the ATSB has attended CSC Friendship in Port Botany to collect relevant physical, documentary and electronic recorded evidence and interview the master and relevant crewmembers. The ATSB also visited the Port of Brisbane to collect relevant physical evidence and interview individuals directly involved with the incident.Further investigation will address weather and flood conditions at the time of the incident, mooring arrangements, the ship’s emergency response, shipboard communication, port procedures during flooding events and an analysis of human factors. ATSB will issue a final report at the conclusion of the investigation.