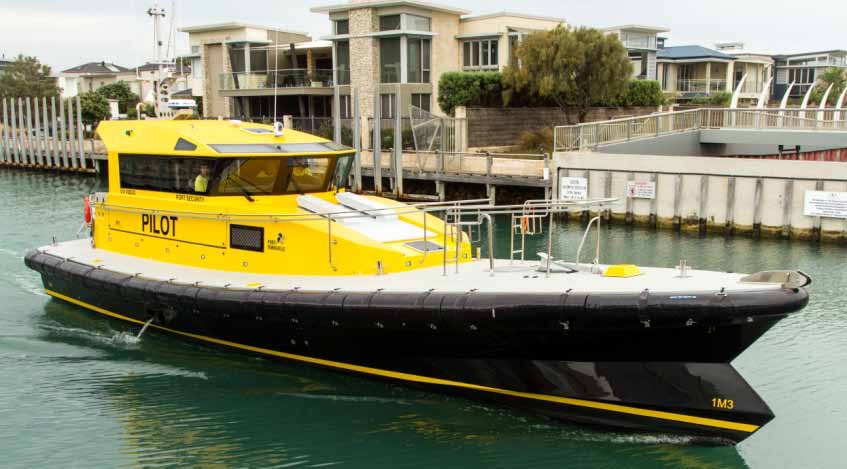 Australia’s Hart Marine commenced life as a builder of very exotic, light and fast FRP racing yachts. However, perhaps unsurprisingly, as owner Mal Hart’s father was a marine pilot and harbour master, the company evolved into building pilot and patrol boats of the highest quality. Since teaming up with a leading French designer, the company has readily adapted its high-tech FRP building skills to the commercial and government sectors. A classic example of its work is this highly refined 17-metre pilot boat for the ever-busy Townsville Port Authority.

“MANTARAY features a unique beak bow hull form,” Hart Marine told Baird Maritime. “This feature reduces slamming, vertical acceleration, and fatigue of pilots besides improving the wave-piercing ability of the boat thereby reducing drag and improving fuel efficiency.” The boat also features self-righting ability at it was designed and built with the provision of safe, comfortable, and efficient pilot transport and transfers as the primary consideration. The result is a sound design delivering a higher level of safety and ease of operation, whilst reducing operating costs.

Hart Marine said the Covid-19 pandemic and the resulting extended lockdowns in some parts of Australia were the only real issues it faced during the construction of the vessel. However, any delays were minimised, partly with the support of the customer during the otherwise difficult period.

When asked about any shipbuilding trends that are gradually growing in importance, Hart Marine indicated the use of relevant technologies in the construction of composite vessels.“We have been working hard over the past six years on composite infusion processes and so we have developed significant technologies that are not used at any other yard. For Mantaray, we were able to infuse the hull and structure in its entirety, an approach which has significant strength and weight advantages.” When constructing a composite vessel, the builder would normally rely on secondary bonding during the layup process for the hull shell and structure, a process that could take many weeks. For this project, all of the fibre was placed dry for the hull shell and structure and the resin-infused under vacuum. Hart Marine said that doing this in one step provides for a truly homogenous structure with no reliance on secondary bonds.

Other advantages of this approach include improved control over the vessel’s weight, as the amount of resin infused is controlled and the environment for the workers is greatly improved.

“We now infuse all parts of our pilot vessels to these high standards,” the company told Baird Maritime. Even with Covid- 19, Hart Marine kept busy throughout 2021, as evidenced by the launching of three new pilot boats and a police patrol boat. The company expects additional prospects in the current year following the further expansion of its range of 12- metre and 17-metre police, rescue, and pilot boats as well as the growth of its commercial service division to cater to both new and existing clients throughout Australia.
“We have also been working on a new facility at Yaringa Marine on Westernport Bay, which is a 45 minutes’ drive from the Melbourne CBD. We acquired the facility in 2018 and we intend to move there in 2023, to allow our company to grow even further by being able to work on larger vessels.” Hart Marine sees that the future of marine pilotage focusing more on the operators of the boats. “The trends we see are based on operator fatigue and how to improve their environment to maintain a safer workplace for them and their passengers. Attributes that are commonly sought after in vessels are ergonomic seating with in-built suspension, sustained noise levels under 72 dB, and intuitive layouts throughout the vessel design and systems.” The company added that base trends that have not wavered are fuel economy through hull design and propulsion packages that can offer improved power-to-weight performance. It believes fuel economy has been and will continue to be the driving factor in the marine sector as fuel is the major cost in high use operating climates. “As for the Australian workboat industry,” Hart Marine told Baird Maritime, “it is very strong at present and we see the outlook is very good. Specifically, we believe the future is in autonomous vessels and in green propulsion and alternative fuels, and so we have been working on these areas.”