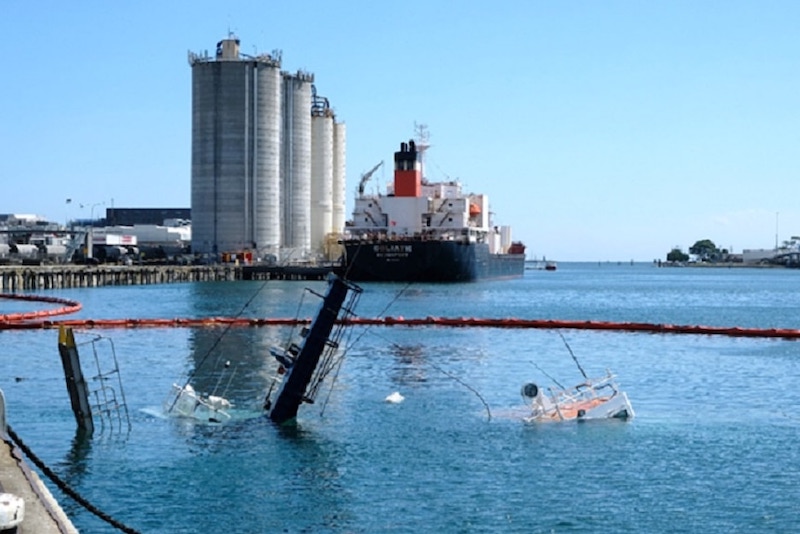 The cement carrier Goliath smashed into two stationary tugboats in January in the Mersey River at the port of Devonport, causing millions of dollars' worth of damage. Both tugs sank.

TasPorts has started legal proceedings in the Federal Court of Australia against Goliath's owner, CSL Australia TasPorts chief executive Anthony Donald said the port authority would try to reach an "acceptable settlement" with the company in the short to medium term. "It is not TasPorts' intention to progress the proceedings unless and until it becomes necessary to do so, but we believe that the commencement of proceedings is a prudent step to take to protect our rights," he said.

In a statement, CSL Australia said they had been transparent with authorities since the incident and had supported and cooperated the investigations conducted by the Australian Maritime Safety Authority and the Australian Transport Safety Bureau. They said they "sincerely regret that the incident occurred". The company said "the safety of crew members and the community, and the protection of the environment remain our top priorities” TasPorts is still in discussions with the company over a financial settlement.

Earlier this month, the Australian Transport Safety Bureau (ATSB) released a preliminary report from its ongoing investigation into the crash involving the two TasPorts tugs, York Cove and Campbell Cove. It found an incorrect steering setting was selected on the cement carrier, and the ship's speed increased by more than three knots as it navigated a tight turn in the Mersey River.

Goliath was travelling from Melbourne on a routine trip with 17 crew members on board when the master of the ship felt it was "not swinging as expected" as it manoeuvred a tight turn in the Mersey River. In a dramatic few seconds, the master tried to stop the ship from moving forward by changing the steering setting, while being informed of the "rapidly decreasing clearances" between the ship and the tugs.

The tugs had a combined 69,000 litres of diesel fuel and other oil on board. While much of the oil and diesel was contained, people and their pets were urged to stay out of the water between Devonport and Latrobe.

The clean-up is continuing.
"At this time, completion of the clean-up operation remains TasPorts' focus," Mr Donald said. "And we are continuing to do everything we possibly can to minimise disruption to port users and other stakeholders."

Salvage continuing
The salvage operation to remove the sunken tugs from the river, described as one of the most complex undertaken in Australia in recent years, is continuing.
Specialist salvage divers were brought in to examine the wrecks. It is hoped barges from the mainland will arrive within the next week to help remove the wrecks. Both tugs are expected to be lifted from the river by a crane and transported to Bell Bay by the end of the month. The incident also caused extensive damage to the wharf. No crew members were onboard the tugs, and no-one was injured.

The investigation is ongoing.