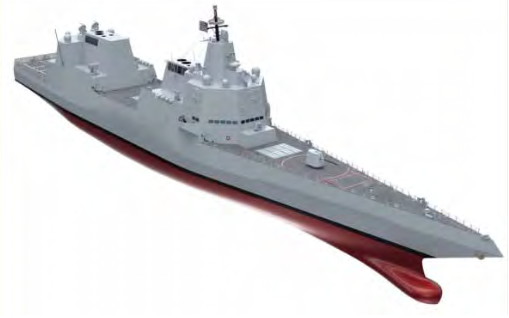 The Navy wants its next warship to fire hypersonic missiles and lasers that would be ten times more powerful than the service’s existing laser weapons, according to the most detailed outlook to date of the DDG(X) next generation warship issued by the service. The warship, the largest the Navy’s attempted in more than 20 years, is designed to provide the service with the power to drive a new generation of directed energy weapons and high-power sensors that will follow the Navy’s current fleet of Arleigh Burke-class guided-missile destroyers. The warship is estimated to start construction in 2028, the Navy told USNI News last year.

“Capabilities that we’re going to need for the 21st century to continue combating the threat are increased missile capability sensor growth, directed energy weapons, which actually require a lot of power, increased survivability and increased power availability,” deputy program manager Katherine Connelly said at a Wednesday briefing at the Surface Navy Association symposium. The Navy is developing the DDG(X) using the combat system developed from the Flight III Arleigh Burkes that incorporated the new SPY-6 air search radar and the Baseline 10 Aegis combat system.
“In order to understand DDG(X) and the need for it, you really need to talk about the large surface combatant as a whole,” Connelly said.“Flight III is going to be in the fleet through the [2060s]. So, the threat is going to continue to evolve. And there will be new threats out there. We on the Navy side will continue to evolve our combat and other capabilities to deter the threat. And we will need a platform that can accommodate those new technologies.” The ship will trade the traditional gas-turbine propulsion system for one like the Integrated Power

System found on the Zumwalt class of guided missile destroyers.
On the three Zumwalt-class DDGs, the ship’s gas turbines drive a ship-wide electrical grid that generates more than 75 megawatts of power – enough to light a small town. The technology will be key for the DDG(X) to generate the power for directed energy and new sensors. Notionally, the new ship could power up to 600-kilowatt lasers that would be powerful enough to interdict hostile guided missiles. Initially, the ship would feature a 32-cell Mk-41 Vertical Launch System forward of the superstructure that could be swapped for 12 larger missile cells capable of fielding the Pentagon’s emerging hypersonic weapons being developed for the Navy, Army and the Air Force. The current DDG-51s field 96 MK-41 VLS cells and USNI News understands that Navy requirements keep the VLS cells for DDG(X) about the same.

The SPY-6 air search radar could expand from a 14-foot aperture to an 18-foot aperture that would increase the sensitivity of the sensor. The Navy is also planning for a modular payload space for different future missions. The Navy is also calling for a ship that can travel 50 percent farther and spend 120 times longer time on station. The plan also calls for a 25 percent reduction in fuel usage compared to the DDG-51 and reduced requirement for the Navy combat logistics fleet. DDG(X) aims to have improved seakeeping and improved Arctic operations.

Arleigh Burke destroyers were designed to operate primarily in the tropics.The combat system developed for the Flight III destroyers will be wrapped in a new hull that would be able to grow as weapon systems evolve, Connelly said. “When we upgraded the Flight III ... we took up all of the service life allowance on that platform. All of the space, weight and power has all been allocated. There is not enough room on that ship to put a new combat capability that takes more power or a larger footprint within the ship,” she said. “The first ship will focus on a new hull form and a new integrated power system. We will use the proven combat system from the Flight III ship so we are designing the ship with the flexibility and the margins to accommodate the future of the Navy and the needs for where we’re going.”

The program office isn’t committed to a specific hull design but presented a swept, angular, bulbous bow design reminiscent of an Arleigh Burke rather than the tumblehome, wave-piercing design of the Zumwalts.

“We haven’t actually locked down the hull form, yet. That’s a concept,” Connelly said, referring to the concept drawing the office presented.“It is one of the many options still in play. ... We as the design team, are going through all the different options to see which one performs best for the long-term and the mission.”

The size of the ship and estimated costs for the program remain unclear. A new warship program will run more than one billion dollars per hull, given the cost to construct a new Arleigh Burke and the developmental costs of the Constellation- class frigate (FFG-62). The program office is now working with the defense industry to refine the basic design after creating a draft Capability Development Document that will hone the operational requirements. Part of that work will be done by the shipbuilding industrial base.

“One of the key things that we’re finding from that is the upfront and early engagement of industry to help us inform our design decisions, our design process. And by doing that, that will enable us to... design a platform that is both producible and affordable in the future. So industry will be part of that decision trade space as we move through the design process,” Connelly said.