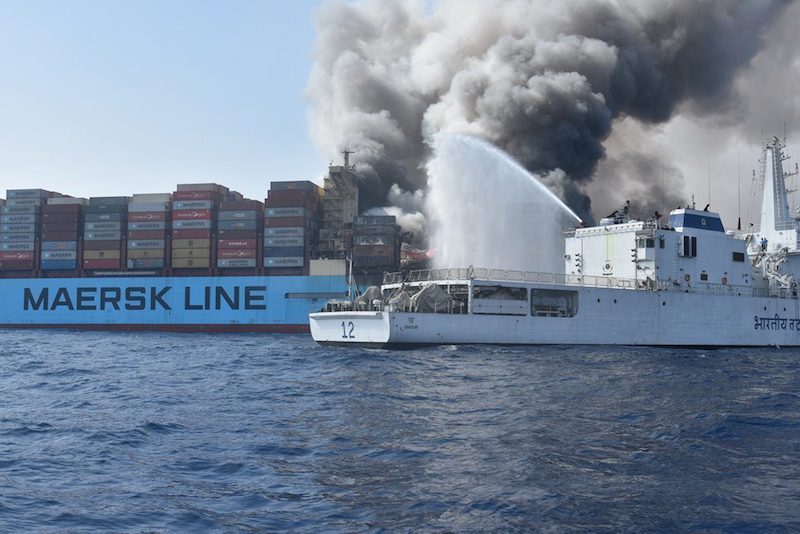 Safetytech Accelerator webinar assesses the complexities of container ship fires and how the maritime industry is innovating to address this challenge.

Identifying the location of the outbreak of a fire onboard a large container ship can be “almost impossible” as it could be in any one of many thousand boxes located either “high up in a stack or buried deep onboard”. With fire onboard happening around every 10 days, Danny Harwood, Deputy Chief Inspector of Marine Accidents at the UK Marine Accident Investigation Branch (MAIB) who participated in a SafetyTech Accelerator webinar on the role of technology in fighting container ship fires, stressed the paramount importance of fire containment and crew training for dealing with these complex situations.

Fellow panellist Alfred Gomez, Director of Maritime Standards at containership owner and manager Seaspan Corp, pointed out that while all seafarers undergo short courses in fire-fighting, their capabilities in this respect are in no way comparable to those of land-based firefighters. IMO regulations need updating, he said, both in terms of the training and onboard equipment required. “With the growing size of ships, we haven’t kept up with firefighting equipment,” he said. “We are severely lacking in the equipment needed so companies like Seaspan have to supply their own.” Fires aboard containerships, as opposed to say large bulk carriers, are also “extremely difficult to handle” because of the more complex configuration of decks, he added, coupled with the vast distances involved to traverse them on larger ships.

Peregrine Storrs-Fox, Risk Management Director of insurer TT Club, pointed to the ‘adjacency risk’ of fires spreading from one box to another, that risk being aggregated by the increasing size of box vessels. This makes it essential for container cargoes to be properly declared, allowing hazardous materials to be identified as such in advance and stowed accordingly. Lessons learned arising from improper stowage should also be widely shared across the industry, as already happens under the Cargo Incident Notification System (CINS) first introduced by shipping lines back in 2011. The TT Club’s priority is for ‘cargo of concern’ to be identified prior to loading, he continued, and while the IMO is working on the problem across the supply chain, there will be a considerable time lag before any regulatory solution is introduced, he warned.

So, what can be done in the meantime to tackle the problem ?

Nick Chubb, Founder and Managing Director of marine innovation consultancy Thetius, pointed to the role that AI and Machine Learning can play in spotting anomalies in vast sets of data and thereby helping detect mis-declared or non- declared cargoes. Liner company Zim, for example, has recently introduced its ZimGuard AI-based system which already detected around a dozen mis-declared cargoes in its first month of trial operation in selected locations and is now being rolled out across the rest of the line’s network. Also, shipbuilder Hyundai Heavy Industries has developed an AI-based fire alarm system that helps detect the outbreak of fires more quickly, Chubb added, and while this was initially used mainly in engine rooms its deployment is likely to be widened. Then there are initiatives from companies like ScanReach that use onboard wireless connectivity to allow temperature sensors to be placed in previously inaccessible locations onboard to more quickly identify rises in temperature caused by an outbreak of fire.

Likewise, Lloyd’s Register is working on battery-powered sensors in difficult-to-access cargo holds under its Safety Accelerator programme, he added, which should give “a 20-minute upstart on traditional smoke detection systems.” In the event a fire does break out, there’s no substitute for the crew having undergone ship-specific physical training that has involved the actual donning of fire- fighting protective suits and operating suppression equipment. “That way you have to go hard on drills, drills, drills,” urged Seaspan’s Gomez. In the same way you need a “high level of competence” in the shoreside personnel who actually inspect cargo before loading, commented Storrs-Fox, with Chubb suggesting that the current IMDG (International Maritime Dangerous Goods) Code contained a hefty, two-volume tome could be made “easier to use.

You can request the webinar recording by visiting: /https://safetytechaccelerator.org/events/webinar-cargo-fire/