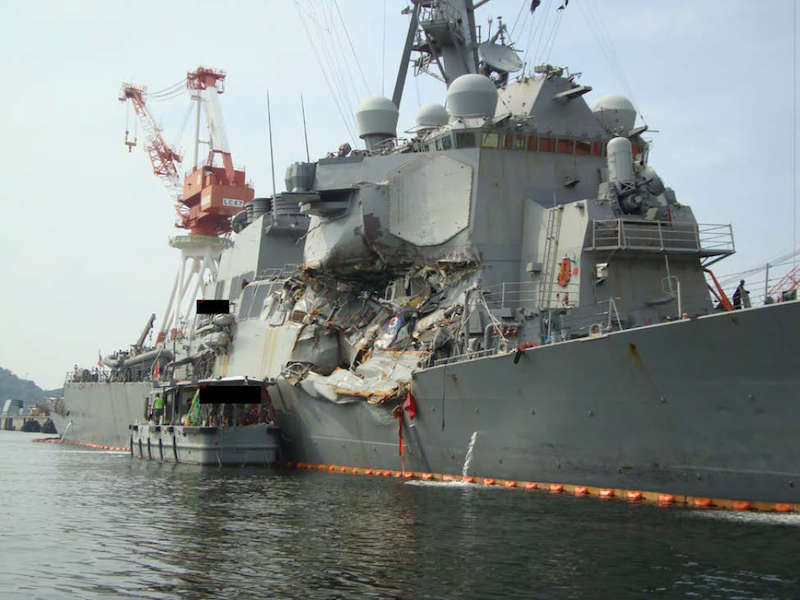 The National Transportation Safety Board (NTSB) has released its final report into the collision between the U.S. Navy destroyer USS Fitzgerald and the boxship ACX Crystal on June 17, 2017. The accident badly damaged Fitzgerald and killed seven members of her crew.

On June 16, USS Fitzgerald left her homeport of Yokosuka, Japan, bound for the Philippines. In the early hours of the following morning, Fitzgerald was traveling southbound at about 22 knots in the bay of Sagami Nada, south of Tokyo Bay, with her lights extinguished and her AIS off. The 730 foot-long container ship ACX Crystal with 21 people on board was traveling east-northeast at about 18 knots in the bay, headed to Tokyo from Nagoya, Japan.

At 0124 hours Fitzgerald made a slight 10 degree course change to starboard, putting her on a collision course with ACX Crystal. The reason for the course change is not known. Neither vessel radioed the other as the distance between the ships decreased, and the watch aboard USS Fitzgerald - the give-way vessel - acted too late to prevent a collision.

At 0130, ACX Crystal's bulbous bow punctured Fitzgerald's starboard side below the waterline, flooding a berthing compartment and killing seven sailors. Her bulwarks crushed a substantial segment of the Fitzgerald's topsides below the bridge, including the commanding officer's cabin. The ACX Crystal, a far larger vessel, suffered non-critical damage above the waterline and no injuries.

Like the U.S. Navy, the NTSB determined that the primary causal factors were COLREGS errors, exacerbated by deficiencies in communication, training and oversight. According to NTSB, these factors included:
- the Fitzgerald’s bridge team’s failure to take early and substantial action to avoid collision as the give-way vessel in a crossing situation (the primary probable cause);
- The ACX Crystal watch officer’s lack of early detection of the Navy vessel and insufficient actions to avoid collision once in doubt as to the destroyer’s intentions;
- Ineffective communication and cooperation among the Fitzgerald crew on the bridge and in the combat information center (CIC);
-The Fitzgerald commanding officer’s (CO) insufficient planning for the transit;
- The Fitzgerald crew’s fatigue;
- The standing practice of US naval vessels not to broadcast automatic identification system (AIS) information;
- and the Navy’s flawed oversight of the Fitzgerald in the areas of operations scheduling, crew training, and fatigue mitigation, as previously identified by the Navy and the Government Accountability Office (GAO).

The NTSB's report recommends three actions for the Navy to take, all of which have been addressed in the Navy's after-accident investigation reports and policy changes. These include recommendations to:
- Review and revise fleetwide training and qualification requirements for officers of the deck related to COLREGS;
- Review and revise bridge resource management training in approved course curriculum, including comms between the bridge and the Combat Information Center (CIC);
- Instruct all ships to broadcast AIS information while operating near commercial vessel traffic at all times unless a broadcast compromises tactical operations or strategic interest.