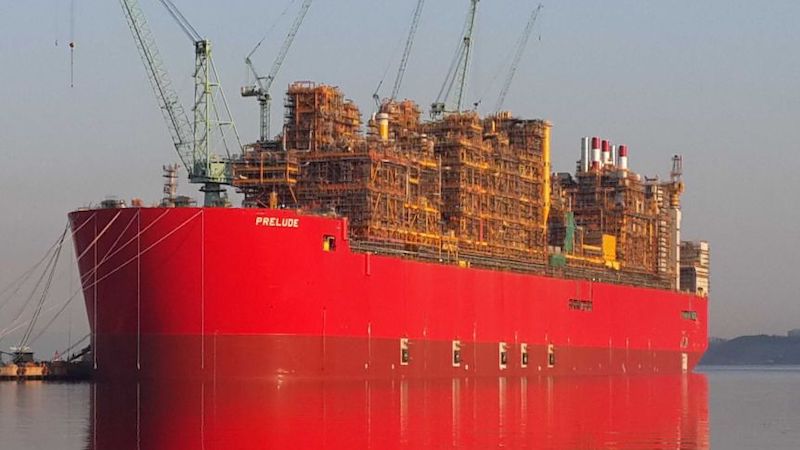 Shell's massive floating LNG factory off the Kimberley coast has been in shutdown since February and industry analysts are divided on whether the $12-17 billion facility has a future. With five times the steel of the Sydney Harbour Bridge and half a kilometre long, it certainly is big.

But as it sits idle 400 kilometres north of Broome, it risks becoming the world's biggest white elephant.

Tim Treadgold is a resources industry analyst who writes for US business magazine Forbes, and says Shell is trying to keep Prelude's predicament under wraps. "It is a big deal, and it's also a big embarrassment, and that's one of the reasons why you're not hearing much from Shell," he said.  "It was hoping to reinvent the way remote gas fields are developed, and you would have to say at this stage that they haven't succeeded."

Curtin University energy economist Roberto F Aguilera said Mr Treadgold's assessment was too pessimistic. "There is no doubt the facility has had trouble. It's a unique technology, very complex," Dr Aguilera said. "It would seem unlikely that they would cut their losses after so much effort and so many billions of dollars in investment."

The floating solution
PRELUDE was born out of the ashes of Woodside Petroleum's attempts to bring the undersea gas in north-west Australia's Browse Basin to an LNG processing hub on the Kimberley coast at James Price Point. When Woodside pulled the pin on James Price Point in 2013 as forecast costs went stratospheric, Shell was already building Prelude in a Korean shipyard.

Shell have never revealed the cost of construction, but even at the estimated figures of $12-17 billion, and with no land- based approvals needed, floating LNG seemed to solve the problems that plagued building new onshore facilities. But even with a vessel that dwarfs the massive LNG ships it is supposed to offload to, cramming an LNG facility, staff accommodation, and all the other services onto Prelude, has been troubled.

PRELUDE was moored over the Browse Basin in November 2017 and production began in December 2018. It was expected to export 3.6 million tonnes of LNG each year, but full capacity has never been reached. The first shipment of LNG left Prelude in June 2019, while another left shortly before the platform was put into shutdown in February. In a statement, Shell did not specify how many shipments of LNG had taken place, but said "regular offtake of LNG, LPG and condensate cargoes" had occurred up until January.

'Dangerous occurences, led to shutdown'
Shell declined to be interviewed by the ABC, but said in a statement that the facility was shut down in February this year due to "an electrical trip".No further explanation was provided about the problem or why it has now kept PRELUDE shut down for six months. Shell also declined to say when PRELUDE would restart production, but said a process was in its final stages."This is the final phase in the multi-stage, multi-faceted, restart process," the statement read in part. "We will be in a stronger position to talk about timing of production and cargo once that has been completed."

The ABC understands NOPSEMA is now assessing Prelude's revised safety management systems, required before work that risks these dangerous leaks resumes. The oil and gas industry has a history of rough beginnings for new facilities, and Dr Aguilera said Prelude will recover from a trifecta of challenges. "It was not just the technical electrical problems, but also industrial action, and then the pandemic which had that devastating effect on natural gas and LNG demand," he said. "That has given a serious hit to the project, but the same is true of LNG all over the world." Dr Aguilera said that with many projects deferred globally,

LNG prices are set to rise when world economies emerge from the pandemic downturn. But Tim Treadgold says PRELUDE was in trouble well before the pandemic and has shown floating LNG is not viable. "I don't think this is a teething problem, I think this is a fundamental underlying problem with the technology," he said. "It wouldn't surprise me at all if at some stage Prelude is towed back to where it was built in Korea."

Shell rejected the idea that PRELUDE could be decommissioned in their statement, saying it was too early to judge the success of the project." PRELUDE is a multi-decade project and its success will be measured by delivering sustained performance over the long-term," the statement read. But the long-term remains uncertain with Shell releasing a statement in April saying it was delaying a final investment decision on developing a gas field that would be needed to backfill Prelude in years to come "due to the global economic downturn, including the sharp drop in oil price, declining markets and uncertainties with regard to the COVID-19 pandemic."

Mr Treadgold said it meant Prelude may hold its record as the world's largest floating object ever built for all the wrong reasons. "PRELUDE is obviously not profitable, no-one's going to build another one like it until it's proven to be profitable," he said. "It just hasn't worked. There's a very real chance that Prelude will leave the coast and we'll never hear of it again."