Towing of broken up Wakashio gets underway 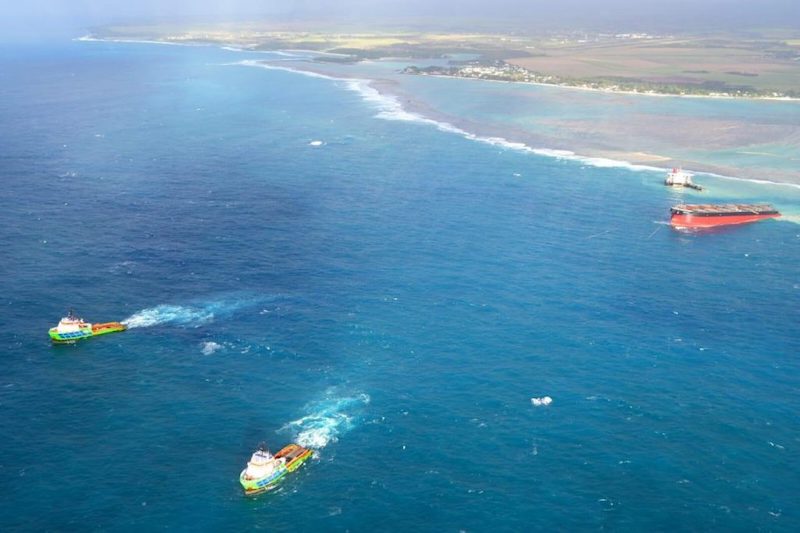 Towing operation of the bow section of the ill-fated bulk carrier Wakashio that split in two after running aground off Mauritius causing a major environmental disaster has been launched earlier today.

Images released by the Ministry of the Environment of Mauritius show that two tugs have managed to set up the tow lines and are pulling the bow section from the grounding site.

In line with the Monday decision made by the National Crisis Management Committee, the bow section is being taken eight nautical miles from the outer limit of the reef at 2000mts depth.

Due to the adverse weather conditions, the stern section which remains aground on the reef is being left at the site as there is still some residual oil in the engine room which needs to be pumped out once the weather clears out.

An estimated 3,894 tonnes of low-sulphur fuel oil, 207 tonnes of diesel and 90 tonnes of lubricant oil were on board.

The affected area is located in a very sensitive zone that includes the Blue Bay Marine Park, Ile aux Aigrettes, and the Ramsar sites.

Around 1,000 of oil are estimated to have leaked from the wreck, while more than 3,000 tonnes of fuel have been extracted. However, some residual oil remains in the stern section.

SMIT Salvage has been appointed by the vessel owner to oversee the salvage operations.

Meanwhile, clean up efforts of the shoreline continues together with monitoring of the impact of the spill on the local flora and fauna.

“Around 884 metric tons of oil liquid waste, 524 metric tons of solid waste sludge and contaminated debris, and 416 cubic meters of saturated artisanal booms have been collected as at mid-day on Monday, August 17, 2020,” National Crisis Committee, set up by the environment ministry, said in the latest update.

The International Maritime Organization (IMO) and the UN Office for the Coordination of Humanitarian Affairs (UN OCHA) have jointly deployed an expert, who is advising the Government of Mauritius on the mitigation of the impacts on the environment and coastal communities.

France and Japan are also assisting Mauritius, which has activated its national oil spill contingency plan.

Alongside IMO and OCHA, the shipowner and International Tanker Owners Pollution Federation (ITOPF) are also mobilising environmental and oil spill experts. The IMO said that its liability and compensation regime is partly in play for this incident.

The Wakashio has compulsory insurance under the 2001 Bunkers Convention concerning all material damage and pollution claims up to the applicable limits in accordance with relevant instruments (including LLMC) and national legislation in force.

Given that the ship involved is a bulk carrier, other international conventions specific to pollution damage caused by oil tankers, such as the IOPC Fund regime, do not apply in this case.

Commenting on the disaster, Greenpeace stressed that the break up of Wakashio and the related spill must serve as an incentive for the industry to “break free from fossil fuels”.