Skipper is used to making waves

The Captain of the COVID-19 plagued ship Artania is no stranger to the limelight. 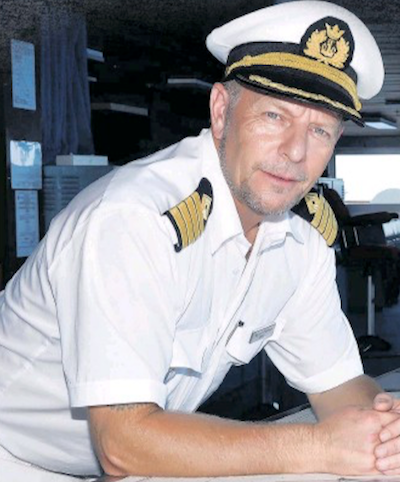 But Morian Hansen’s starring role in a long running Germany documentary series would have done little to prepare him for the health and diplomatic crisis in which he is now embroiled.

Verrückt nach Meer, which roughly translates to Crazy for the Sea, has been running for 10 seasons and details the highs was lows of cruise travel on several Phoenix Reisen operated vessels

Artania, it’s passengers and crew, led by captain Hansen were the stars for three seasons from 2013 to 2017 before sharing time with another ship up until the ninth season, which finished in February

The ship was not part of the shooting schedule for the yet to air 10th season of the programme - depriving viewers of a behind the scenes glimpse of the COVED19 outbreak that forced Captain Hansen to issue an urgent middle of the night plea to dock at Fremantle port last week.

Captain Hansen even has a Facebook page dedicated to him which boasts more than 30,000 followers and Instagram is littered selfies depicting the Norwegian smiling alongside thrilled passengers.

In a magazine interview last year, he revealed he was born into a seafaring family in Norway and completed his nautical trading in his hometown of Tromso

“ Sometimes it’s a bit much because I’m only part of the team, but I always try to find time for the fans. Fortunately I’m a nice guy by nature, so I don’t mind”