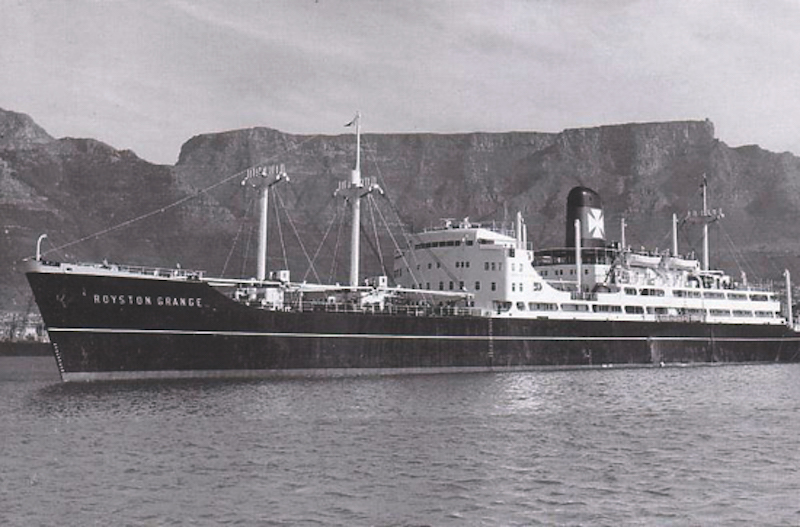 Fifty years ago on 11th MAY 1972 the cargo passenger ship “Royston Grange” was heading from Buenos Aires back to London, on board were 61 crew, 12 passengers (including six women and a 5-year old child) and the Argentinian pilot. In dense fog as she crossed the Pyunta Indio Channel, just before six in the morning she collided with the Liberian-registered tanker Tien Chee, carrying 20,000 tons of crude oil. The Tien Chee immediately burst into flames and a series of explosions rapidly carried the flames to the Royston Grange where most of the crew and passengers were asleep. Sadly all 74 people on the Royson Grange lost their lives.

What was surprising was the fact that the Deck officers and passengers were separated from the engineers and the crew by a cargo hatch. The hold was holding a cargo of butter and the insulation ignited from the initial fireball of vapor from the oil tanker.

The Tien Chee also caught fire and eight of her forty Chinese crew died but the remainder, along with her Argentinian pilot, managed to abandon ship and were picked up by cutters of the Argentine Naval Prefecture.

Following an enquiry into the disaster, the report concluded that the master and pilot of Tien Chee had probably been navigating too far south of the Pyunta Indio Channel in an attempt to find deeper water to accommodate her deep draught. The report concluded that the officers of the Royston Grange were probably not to blame, although there may have been some human error in attempting to avoid the collision. Whilst finding that the Master and pilot of the Tien Chee probably should’nt have entered the channel in the tidal conditions prevailing at the time, the report criticised the lack of maintenance of the channel.

In March 1974, Royston Grange was towed to Barcelona,where her scrapping began on 20 May 1979