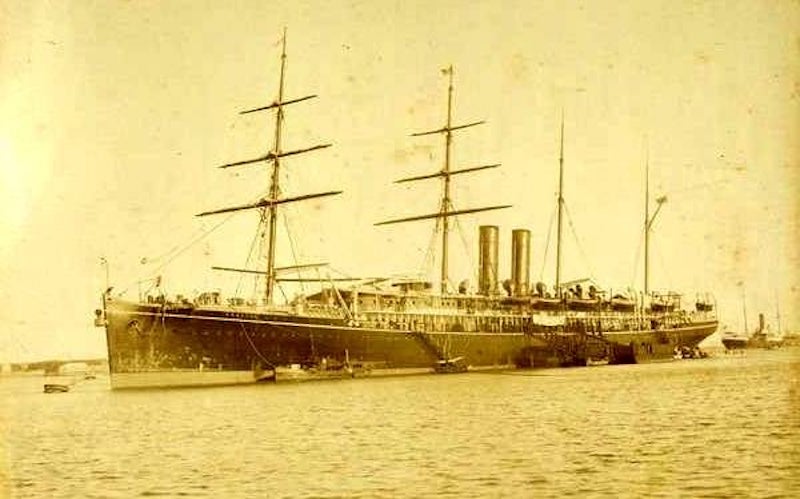 On 15th March 1912, P&O’s Oceana, under the command of Captain Thomas H. Hyde, RNR. completed loading in the Port of Tilbury, for her next trip to Bombay. Onboard were 41 passengers, a complement of 220 crew and a Straits of Dover pilot. She was also carrying £747,110 worth of gold and silver ingots.

The next day she was proceeding west through the Strait of Dover at nearly full speed. The sea was calm although there was a strong headwind. In the opposite direction approached the Pisagua, a 2,850-ton German-registered four-masted steel-hulled barque. Commissioned, owned and operated by F. Laeisz of Hamburg, she was on her way from Mejillones in Chile to Hamburg with a cargo of nitrate, sailing under full sail at a speed of almost 20 knots.

The two ships sighted each other when they were about half a nautical mile apart. Pisagua burnt a warning flare, which was seen by the crew and chief officer on the bridge of Oceana, who then gave the order to turn to port. The pilot, Mr Penny, who was in the charthouse, came into the wheelhouse and realized that this manoeuvre would not be enough to avert a collision, and called "hard to port", but before Oceana could get out of her way, Pisagua struck her amidships, making a 40-foot gash in her side. The collision was 4 nautical miles off Beachy Head.

The immediate closure of all watertight bulkhead doors was ordered, while the captain sent all crew and passengers to their boat stations to stand by to abandon ship.

Receiving Oceana’s immediate distress signal, the London, Brighton and South Coast Railway passenger ferry Sussex attended the scene, while two other paddle steamers and the RMS Ruahine stood by. While awaiting rescue, the Oceana’s crew tried to lower one of the lifeboats, but it crashed into the sea and capsized, resulting in the loss of seven passengers and ten crew. The Sussex managed to take on board 241 of the remaining passengers and crew.

Although listing heavily, Oceana was taken in tow, stern first, by the Newhaven tug Alert, at 08:00. But by 10:00, her propeller was out of the water and Captain Hyde and the crew who had stayed aboard to help the tow, now abandoned ship to the Alert, and watched from the tug as Oceana sank in less than 20 minutes, close to the seaside resort town of Eastbourne, in shallow water, settling on the sea bed with her masts and the tops of her funnels showing above the surface at low tide.

Pisagua drifted off to leeward after the collision, but managed to survive with severe damage to her bow and foremast. Towed to Dover for immediate repair, she was then towed to Hamburg, where she was condemned as a total loss – but later rebuilt as a whale factory ship. 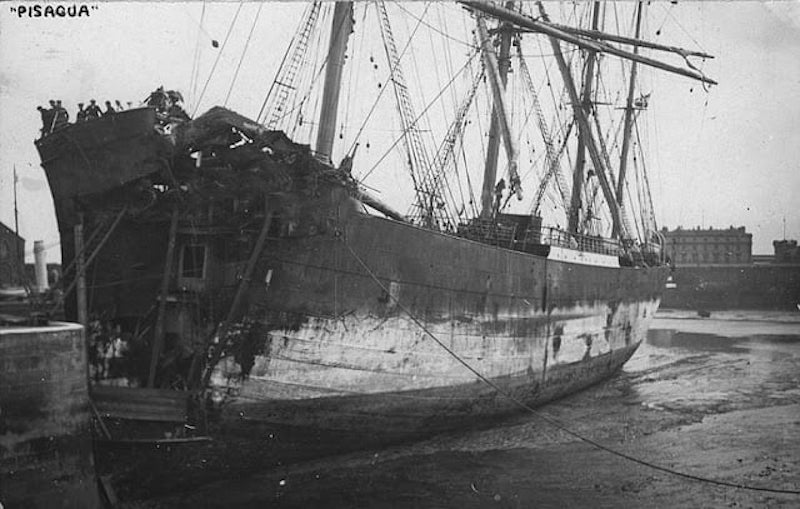 After the sinking, P&O sued Pisagua’s owners, claiming damages for the loss of Oceana. However, judgement was given that Pisagua was not at fault, due to a combination of factors, including that Oceana was obliged to give way to Pisagua under the "steam gives way to sail" rule. The subsequent Board of Trade Inquiry, which reported on 13th July 1912, reached similar conclusions, suspended the chief officer's certificate of competency for six months and censured the master, Captain Thomas H. Hyde, RNR.

The wreck of the Oceana lay in eighty feet of water and, with most of her valuable cargo salvaged, she was destroyed as a hazard to navigation. Today, what remains of her on the seabed, is a popular scuba-diving site - with the odd silver ingot still turning up.....