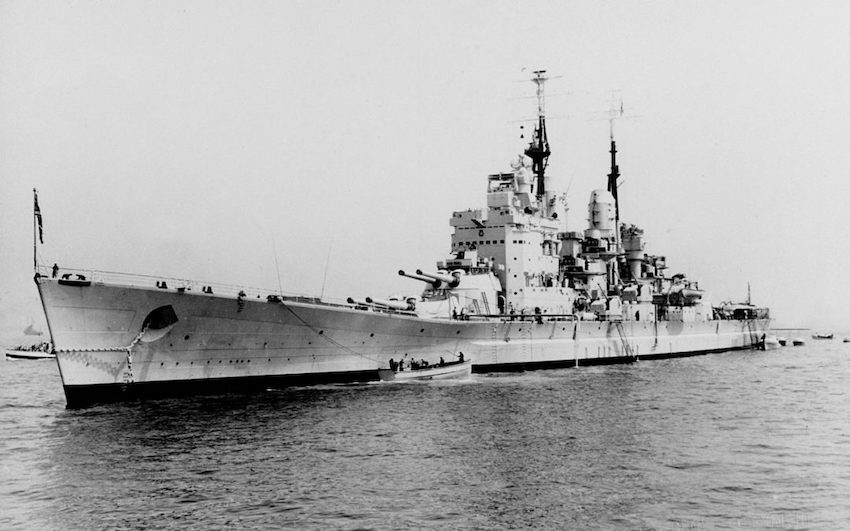 HMS Vanguard was a British fast battleship built during the Second World War and commissioned afterwards. She was the biggest and fastest of the Royal Navy's battleships, the only ship of her class, and the last battleship to be built.

The Royal Navy anticipated being outnumbered by the combined German and Japanese battleships in the early 1940s, and had therefore started building the Lion-class battleships. However, the time-consuming construction of the triple-16-inch turrets for the Lion-class would delay their completion until 1943 at the earliest. The British had enough 15-inch (381 mm) guns and turrets in storage to allow one ship of a modified Lion-class design with four twin-15-inch turrets to be completed faster than the Lion-class vessels that had already been laid down.

Work on Vanguard was started and stopped several times during the war, and her design was revised several times during her construction to reflect war experience. These stoppages and changes prevented her from being completed before the end of the war.She was decommissioned in 1960 and was entirely scrapped within two years.

There is often much debate about preservation of certain ships in the post-WWII environment. As the last British battleship, Vanguard is often a part of those discussions. But, her swift disposal - she was sold to the breakers and scheduled to depart for them within two months of decommissioning - highlights just how little stomach the British had for the costs and complications of preservation after the conflict.

The cost of preparing a ship for display, towing it to its destination, renting waterfront space, maintaining a vessel intended for hundreds of men with a handful of volunteers or even fewer staff on a shoestring budget, all these things are expensive and often prohibitive without the utmost dedication of the right organisation. Modern outrage, regardless of country, is often directed towards “them” - “they should have kept _____.” But the reality is that “they,” the government and respective navy, built the ship for a purpose, and when it is no longer useful and cost-effective, they dispose of it like any other worn-out piece of equipment.

In the case of Britain, while there was SOME public interest in preservation by the late 1940s, as demonstrated by the general distress over Warspite’s very public grounding and eventual scrapping, Britain did not have money to spare and support for preservation was not widespread. The war had taken its toll economically and physically; debt was greater than GDP, and steel was in short supply. By the mid-1950s, the battleship had no place in Cold War naval strategy, and was expensive and manpower-intensive to maintain. The type was thus a political liability; for a combination of all these reasons, they were unceremoniously eradicated from the Navy Lists, ending with Vanguard’s last stand when she ran aground during what was supposed to be a rapid, debate-free departure from Portsmouth for the scrapyard