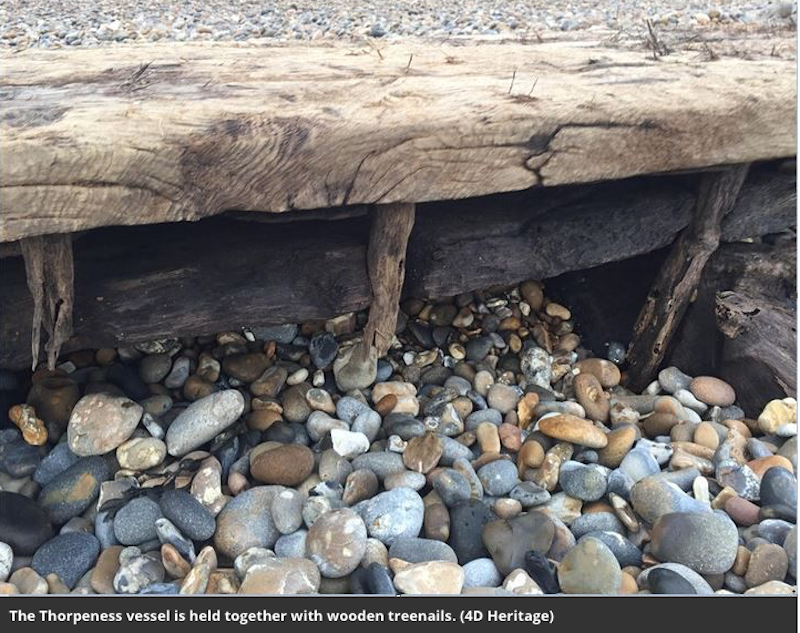 Winter storms on England’s Suffolk coast have uncovered the wrecks of two ships possibly dated to the 18th century or earlier, reports Katy Sandalls for the East Anglian Daily Times.

Saxmundham resident Stephen Sugg and his wife were walking on Covehithe beach, located on England’s eastern coast, when they spotted a large section of a wooden vessel. “It was really nice to go and look at,” he tells the East Anglian. “It was quite impressive.”

The remains of the ship’s hull are held together largely with wooden treenails, a type of fastening pin used between the 13th and 19th centuries, according to BBC News. Traces of the vessel were first uncovered three years ago but were subsequently hidden again by shifting sand and pebbles.

Storms also revealed a portion of a second ship, similarly secured with trenails, at Thorpeness, about 20 miles south of Covehithe. As Sandalls writes in a separate article for the East Anglian Daily Times, Nicholas Mellor, the heritage conservation specialist who stumbled onto the Thorpeness wreck, initially assumed that the debris was driftwood. When he took a closer look, however, Mellor realized that it was part of a larger structure. “It’s got the curve of a large boat,” he tells the East Anglian. “It’s built incredibly solidly.” 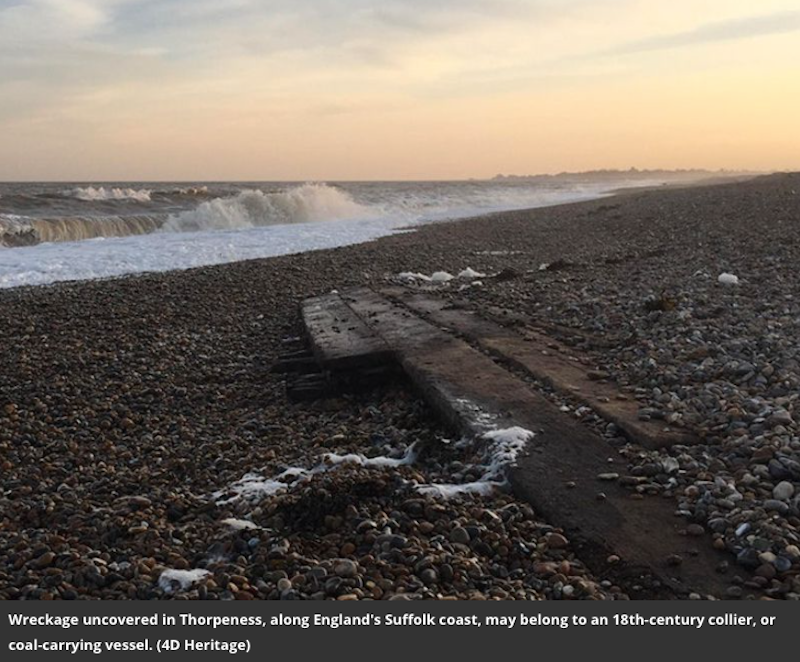 Mellor adds that the ship was likely either a warship or a collier, a type of bulk cargo ship that carried coal.

So far, Covid-19 restrictions have prevented coastal archaeologists from visiting the wrecks to learn more about them. But Andy Sherman, discovery officer for the Coastal and Intertidal Zone Archaeological Network (CITiZAN), tells BBC News that photographs shared by the public have offered a “tantalizing glimpse” of the ships.

“It’s very exciting to see,” he says. “Hopefully they will still be there in three or four months so that we can do further investigations.”Based on available photographs, Sherman has confirmed that the Thorpeness vessel was held together with treenails. He says that the ship may have been made with an unusual technique employed by builders in the late 16th and early 17th centuries. “It’s difficult to tell from the photographs but this section of wreck appears to have double hull planking, which could be really exciting,” Sherman explains to BBC News. “This makes the vessel slightly more buoyant on one side and is really, really rare. Although the technique is known from historical writings there is only one well-known example in the U.K. archaeological record.”

The discovery at Thorpeness has attracted much public interest, with almost 300 people tuning in to a March 4 online discussion organized by Mellor and 4D Heritage.

According to BBC News, Mark Horton, an archaeologist at the Royal Agricultural University who took part in the event, suspects that the wreck is probably an 18th-century collier similar to the H.M.S. Endeavour.

Sailed by James Cook on his 1768–1771 voyage to the South Pacific, the Endeavour was initially designed as a coal carrier. Cook and his crew adapted it for the journey, which ostensibly took them to New Zealand and Australia on a scientific expedition but also involved a secret mission: asserting Britain’s imperialist presence in the region, as Lorraine Boissoneault wrote for Smithsonian magazine in 2018. The Endeavour eventually made its way to the United States, where it sank off the coast of Rhode Island in 1778.

No known colliers survive today, says Horton to BBC News, so the newly discovered shipwreck could yield important findings about this type of vessel.

Mike Tupper, managing director of the International Boatbuilding Training College Lowestoft, is among the individuals who have visited the Thorpeness wreck in person. He tells BBC News that “the sheer size of it blew my mind.” The ship’s topside—constructed out of oak timbers—appears to have measured between 100 and 150 feet long, he adds. “If we can identify the species of oak, we’ll have a good idea of where it was made because back-in-the day, trees of this size—at least 150 years old—would not have been moved far as they were so heavy,” Tupper says.

Like the Thorpeness ship, the wreck at Covehithe will have to wait for pandemic restrictions to be lifted before experts can fully analyze it. The vessel appears to sport thin metal sheathing plates that could be used to date it.