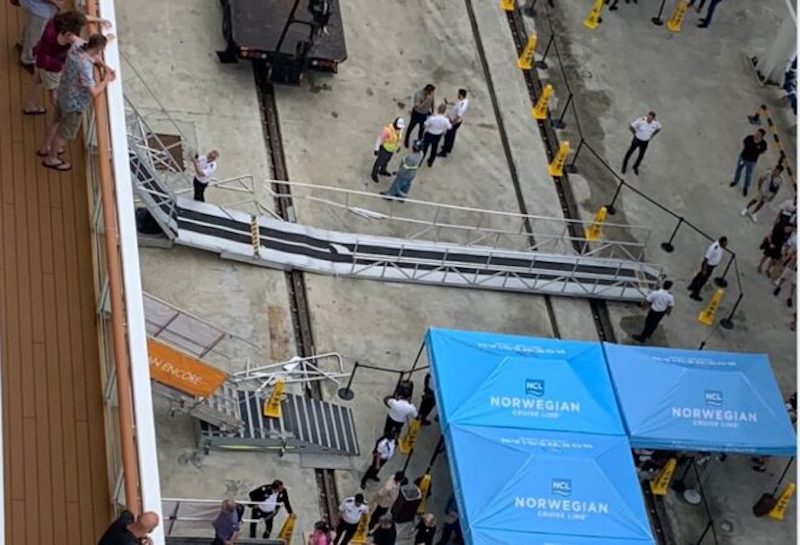 Multiple passengers were injured when a gangway with nearly a dozen passengers on it collapsed after the Norwegian Encore called at port in Panama City, Panama on Tuesday, according to USA Today. The NCL cruise ship is currently on a twenty-one day Panama Canal cruise from Seattle to Miami where the ship will arrive on Sunday.

The injured passengers were taken to a nearby medical facility, a NCL spokesperson told USA TODAY in an emailed statement: “We have dispatched our CARE Team to Panama City to offer additional support to these guests.”

NCL did not mention the number of injured guests, the severity of their injuries, or the reason for the gangway collapse.

A passenger and former journalist who was on the NCL cruise ship who identified herself as JournoGenevieve tweeted photos and video and explained that there were at least nine guests who were injured and taken away by at least six ambulances. She later updated her Twitter feed to state that she learned that “11 passengers were on (the gangway) at the time. All appeared to have been medically disembarked before we left port at 7pm.”

The gangway was located from deck six leading down to the concrete pier below.

This passenger surmised that the accident occurred because “the gangway was put out during low tide in the morning at a fairly reasonable angle, which gradually became steeper and steeper as the tide and ship rose during the day – leading to maybe inevitable collapse when 11 people bounced/flexed on it.”

Pursuant to the forum selection clause in the terms and conditions of the NCL passenger ticket, injured passengers must provide written notice to NCL within six months and must file lawsuits arising out of the accident in federal court for the Southern District of Florida within one year.

A couple of people left comments on our Facebook post suggesting that the gangway may have been owned by the Port Authority in Panama. Even if this is true, cruise lines have a non-delegable legal duty to provide reasonable means of ingress to and egress from the ship which cannot be delegated to third parties. As several courts in this jurisdiction have ruled, a “common carrier has a “duty to maintain reasonable, safe means for passengers to . . . disembark” and that “this duty is nondelegable.”

Members of Cruise Critic posted comments about the accident and several photographs. One person, identified as “User 58953268” who was on the ship, commented:
“At least initially, on the morning of the first port day, the NCL staff was concerned enough about the gangway that they were only letting a small number of people go down the gangway at a time. (There was an extremely long line to get off the ship because this was the only exit, and they were restricting the number of people who could be on it at once.)I have spoken with many people who told me the same thing- which was when they first stepped out, they thought something to the effect of hoping it was safe and could hold them, seeming rickety, kind of nervous about it, etc.
When it first collapsed, early afternoon on the second day, at least some of the people were actually hanging off of it holding on for dear life, until they finally couldn’t hold on any longer and slipped off, crashing onto the pavement below. It sounded horrific, and at least one of the eyewitnesses was hysterical. Later, another eyewitness said that several people had apparent bad injuries but two “were unresponsive.”I do not know if anyone died. I have not spoken to anyone who knows whether anyone died or not . . . I did not see nor hear of anyone with only minor injuries. To my knowledge all victims had serious injuries and were hospitalized in Panama. (Again, unknown if any died. The ships do all have morgues.)

As other passengers were returning to the ship from touring, and getting off the shuttle bus, they used NCL gangways to get back on. You can see them in the photo. I do know of one crew member that stayed behind in Panama with the injured. I personally saw crew members put lots and lots and lots of luggage onto elevators (I saw two FULL elevators of luggage). About an hour after this, the ship left. This was on time.
There have been no announcements about this incident or anything related to it since it happened, nor changes to the itinerary.
May you all never have to experience a tragedy like this, travel or otherwise ”

Another member of Cruise Critic, identified as “PTC DAWG,” indicated he had friends on the ship who informed hin of this information:
“. . . The dock is new, and not completely finished.  Main gangway was not ready, so this one was used instead.  In the morning, they restricted it to two passengers at a time to get off the ship, and it took hours for people to get off for their excursions, and outings.  In the afternoon, for re-boarding the ship, they didn’t restrict the number of passengers on the gangway at the same time — and you see the result.”

Another person on the ship, identified as “shof515,” commented below while posting this photo: ‘Here is a picture of the gangway: i somewhat hate to say but it kind of looks like a fun slide to get off the ship. that could be a neat way to leave the ship.”