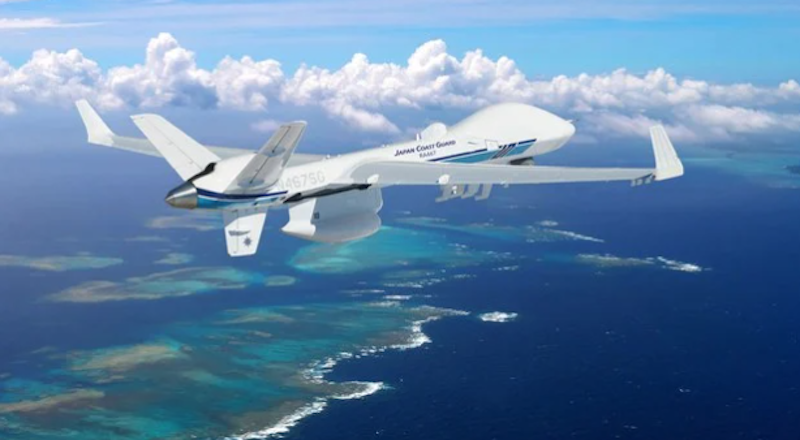 Japanese Coast Guard has put a highly sophisticated U.S.-made drone that can circle the whole country’s maritime area into operation amid increased tensions in the region.

The manufacturer, General Atomics Aeronautical Systems, said that an MQ-9B SeaGuardian unmanned aerial vehicle (UAV) has been deployed since last week for wide-area maritime surveillance over the Sea of Japan and the Pacific Ocean.

“Other missions will include search and rescue, disaster response, and maritime law enforcement,” the California-based company said in a press release.

Japan’s Coast Guard is currently operating the drone from the Hachinohe air station on the northeast coast of Honshu island.

The SeaGuardians are designed to fly for up to 40 hours in all types of weather, enough time to perform surveillance over the entire Japanese exclusive economic zone. They are equipped with high-definition cameras that can detect ships from altitudes of over 3,000 meters (984 feet), as well as identify approaching aircraft using radar and infrared rays in the night time. The remotely piloted aircraft also has strike functions useful in anti-submarine warfare. Piloting will be outsourced under the coast guard’s supervision, according to local media.

Japan is considering buying more drones for maritime surveillance but has not disclosed the number. Defense sources said the cost to introduce the aircraft is about 4 billion yen, or U.S. $26.8 million.

General Atomics Aeronautical Systems said it began developing the MQ-9B SeaGuardian in 2014. Australia, the United Kingdom and Belgium are among clients, with the U.K. eyeing to purchase up to 16 units.

Maritime Security Threats
The Taiwanese military finalized a deal to buy four SeaGuardians worth TWD $16.88 billion (U.S. $555 million) in August, with the first delivery in 2025.

The U.S. State Department approved the sale of the drones, along with ground control stations and embedded navigation systems, to Taiwan in 2020. The procurement process is understood to be speeded up as cross-Strait tensions accelerate.

The drones will be operated out of Hualien in eastern Taiwan, according to media reports.

Taiwan is developing an indigenous reconnaissance and strike UAV, called Teng Yun, but the production is being delayed due to technical problems.
At the same time, the Taiwanese government is setting up a national drone defense system to deal with security threats from China. In recent months, Chinese drones have been spotted flying regularly over Taiwan’s outlying islands, causing concern.