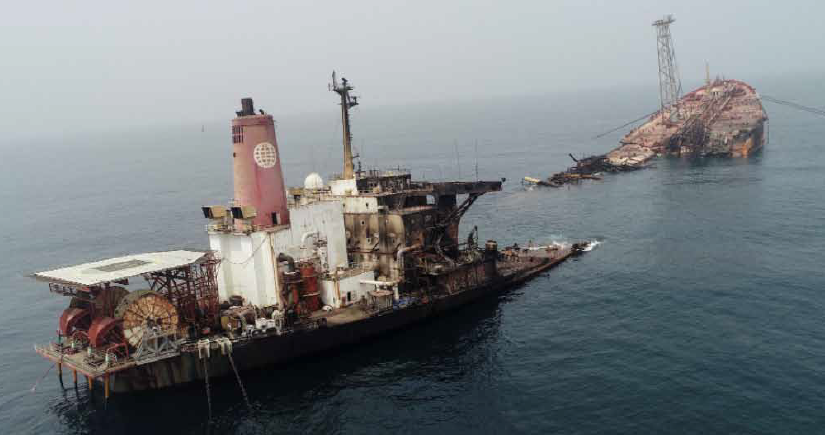 The owners of an oil-production and storage ship had a history of financial problems before the vessel blew up in Nigerian waters two months ago.

The TRINITY SPIRIT, which caught fire on Feb. 2, burned for more than 24 hours and left a stain of crude stretching for miles across the Atlantic Ocean.

While the cause of the accident hasn’t yet been determined, the “inferno” meant only a “low level” of crude was spilled, according to Idris Musa, director-general of Nigeria’s National Oil Spill Detection and Response Agency. The Environment Ministry estimates that up to 60,000 barrels of oil were on board the ship at the time of the blaze.

The fatal incident occurred amid an ongoing trail of debt. Creditors have filed lawsuits against the company operating the ship, Nigeria-registered Shebah Exploration and Production Co., in at least three countries, accusing the firm of defaulting on multiple financial agreements. These include two bank loans for a combined $220 million and a contract for the management of the vessel itself, according to court documents and corporate statements.
Ambrosie Bryant Orjiako, a prominent businessman and president of Shebah, acted as the personal guarantor of a $150 million loan taken by the company in mid-2012 from the African Export-Import Bank and two Nigerian lenders to fund a drilling program on the firm’s oil license. Shebah leased the vessel from one of its shareholders named Allenne Ltd., a company registered in the British Virgin Islands of which Orjiako was a director, according to court filings.

Orjiako is best-known as a founder of Seplat Energy Plc, which has grown since 2009 into Nigeria’s largest independent oil producer and in February agreed to pay $1.3 billion for Exxon Mobil Corp.’s shallow-water assets in the country. Seplat has no involvement with the Trinity Spirit or any of Shebah’s legal disputes, Orjiako said by email, declining to comment on any matters that are still in court. He referred questions regarding the vessel to Shebah Chief Executive Officer Ikemefuna Okafor, who didn’t respond to emails or calls. Orjiako announced in November that he will step down as Seplat’s chairman in May. Shebah stopped paying down the Afreximbank loan after meeting a single $6.1 million installment, according to a lawsuit filed by the lenders in the U.K. against the company, Allenne and Orjiako. In February 2016, a judge ruled that the banks were entitled to $143.9 million, which remains unpaid and has doubled with interest, Afreximbank said in a statement. The banks “continue to consider their options for recovery,” Afreximbank said through its law firm Baker McKenzie.

Orjiako, 61, had argued that delays by Afreximbank in releasing the funding led to drilling contractors either withdrawing or withholding their services, according to a defense he submitted to the London court in September 2015. A U.K. judge dismissed an appeal by Shebah and Orjiako against the decision in mid-2017.

Shebah in 2004 acquired a 40% interest in a permit known as Oil Mining Lease 108 from ConocoPhillips as Allenne purchased the Trinity Spirit from the Houston-based producer. Shebah agreed to bear all costs in return for 80% of income from the block.Output levels wouldn’t return to Conoco’s 20,000 barrels a day from the license, with no production recorded since 2017, according to data published by Nigeria’s state-owned energy company. The government announced in 2019 that it was revoking the permit, without specifying why.

A spokesman for the Nigerian Upstream Petroleum Regulatory Commission didn’t respond to questions about whether the license was ever withdrawn.Shebah is also under pressure from other creditors. A federal court in Lagos last year granted Zenith Bank Plc, one of Nigeria’s largest lenders, an injunction preventing selected companies from dealing with Shebah’s assets in a dispute around a $70 million loan provided in 2014 to Orjiako’s firm. Zenith said it doesn’t comment on matters that are in court.

A Houston-based oil services company, Alliance Marine Services, alleged it terminated a contract to manage the Trinity Spirit after Shebah accumulated arrears of $5 million, according to a case filed in a U.S. federal court in 2009. The plaintiff said it had also initiated arbitration proceedings in the U.K. to try recover the money. AMS voluntarily dismissed the lawsuit several months after commencing it and it’s not clear whether the dispute was resolved. Bloomberg was unable to reach AMS.Shebah and two other companies connected to Orjiako were ordered by a U.K. court in 2020 to pay a Greek shipping company $4.3 million after the trio defaulted on a 2017 agreement to charter a tanker.In 2019, a federal court approved the appointment of a receiver by the state’s debt recovery agency, the Asset Management Corp. of Nigeria, or Amcon, to manage Shebah. Before the fire, the oil firm, which is still in receivership, had offered the Trinity Spirit to Amcon to reduce some of its debt, according to a spokesman for the government body. Amcon is trying to recover a portion of the loans provided by local lenders in 2012, which the agency has since taken over from one of the three banks.