‘Mysterious’: the $700m superyacht in Italy some say belongs to Putin 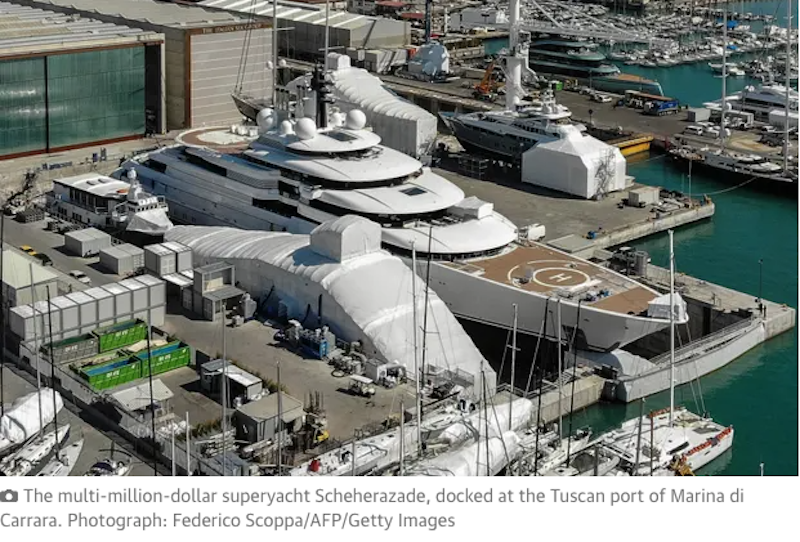 For several months, the mysterious 140-metre-long, six-floor superyacht has towered over the smaller boats in the shipyard in Marina di Carrara, a town on Italy’s Tuscan coast, arousing chatter among its people over the identity of its wealthy owner.

“It’s the largest yacht I’ve ever seen here,” said Suzy Dimitrova, who owns a boat in the marina. “There are people cleaning it all the time. The last time I saw it leave [the shipyard] was last year. We’re all wondering who the owner is.”

The Scheherazade, said to be worth $700m (£528m), is under investigation by Italian authorities for potential links to sanctioned Russians. And activists working with the jailed Russian opposition leader Alexei Navalny are in no doubt that the yacht is owned by the Russian president Vladimir Putin.

On Monday, investigative journalist Maria Pevchikh and anti-corruption activist Georgy Alburov said that all crew members, obtained from a list dating December 2020, were Russian, apart from the captain. In a video published on YouTube, they claimed that some of the yacht’s staff worked for the Russia’s Federal Protective Service (FSO), an agency that manages security for high-ranking officials including Puti

The activists, who have urged Italian authorities to seize the yacht, said this information proves it belongs to Putin. “They are Russian state employees, military personnel, and they regularly travel to Italy as a group to work on the mysterious yacht,” Pevchikh wrote on Twitter.

The interior of the vessel was described as being equipped with a spa, swimming pools, two helipads, a wood-burning fireplace and a pool table designed to tilt so as to reduce the impact of the waves.

In an address to the Italian parliament on Tuesday, the Ukrainian president Volodymyr Zelenskiy urged Italy to seize the yacht, adding that Putin and his wealthy supporters often holidayed in Italy and should have their assets blocked. “Don’t be a resort for murderers,” he said. “Lock all their real estate, accounts and yachts – from the Scheherazade to the smallest ones.”

Putin’s last official visit to Italy was in 2019, at the invitation of the former prime minister, Giuseppe Conte. He also held talks with Pope Francis at the Vatican during the visit.

Marina di Carrara is close to Forte dei Marmi, a favourite holiday destination for Russian oligarchs, many of whom have bought villas and beach resorts.

In early March, Italian police seized a yacht owned by Alexei Mordashov, the richest man in Russia before being blacklisted by the European Union, and another owned by Gennady Timchenko, a billionaire with close ties to Putin, in the Ligurian port of Imperia.

The yacht can only be seen through a fence, where it is continuing to undergo a refit, scheduled to be completed next year, in a shipyard owned by The Italian Sea Group, a company that refits and builds luxury yachts

The mystery over its owner gathered momentum in early March, when finance police in Carrara boarded the yacht as EU sanctions against Russian oligarchs kicked in over Russia’s invasion of Ukraine. The police seized ownership documents from the yacht’s British captain, Guy Bennett-Pearce. At the time, US officials told the New York Times that they were also investigating whether the yacht belonged to Putin.

The Italian Sea Group said in a statement that it was continuing to work on the ship’s €6m (£5m) refit and maintenance despite the EU’s sanctions and that, according to documents in its possession, the vessel “is not attributable to the property of the Russian president Vladimir Putin”, and neither is it owned by a Russian on the sanction list.

A source at the finance police unit in Carrara said that they are now aware who the owner is and will soon make an announcement.

An investigation by La Stampa newspaper earlier this month had linked the vessel to Eduard Yurievich Khudainatov, the former president of the Russian state oil firm Rosneft, via a shell company registered in the Marshall Islands. But Italian police are reportedly certain that Khudainatov is not the yacht’s real owner. “He seems to be a man connected with Putin’s inner circle but not so rich as to own a yacht like the Scheherazade,” said Jacopo Iacoboni, the journalist for La Stampa who carried out the investigation.

Until the Italian police reveal their findings, the people of Marina di Carrara continue to ponder, even if its presence causes concern. “Putin is the presumed owner, and looking at it now causes me a lot of anxiety because of what he is doing in Ukraine,” said Maria Cristina.

However, there are no signs of protests being planned. “There are always a lot of words, but little action here,” said Dimitrova